If I had a theme for collecting in 2019, it would be the "Year of Frugality".  I'm not going to pretend that I won't spend a single dime on new cards all year, and I'm not setting any strict goals for spending either (I've kept a budget anyway for about the past 6 years, so nothing new there).  I am truly making a concerted effort to spend considerably less money acquiring new cards though, and considerably more time enjoying and posting about the ones I already have.

Thanks to an Amex gift card that I received for a work anniversary last year I was able to pick up a few last cards off of COMC with pretty much nothing spent out of pocket, and had enough credit to ship them too.  I expect it will be my last COMC shipment for some time due to my above-stated goal.  Anyway, I need to make some room in my card chest before that last batch arrives, so let's do a "COMC Blaster" to clear some space... 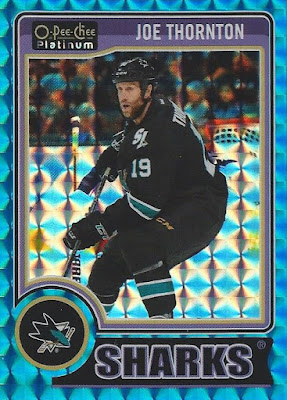 I pulled all the cards at random for today's post, as I typically do, so it was coincidental that the first card up is a Blue Cubes parallel from O-Pee-Chee Platinum, given that I featured a card from this parallel set on the blog just last Friday.  These are beautiful cards, and somewhat rare being numbered to /65.

Joe has the most career points of any active player in the NHL, currently sitting at 16th all-time.  He's got a real shot to move up two more spots before season's end, too.  An absolute lock for the HOF when he eventually decides to retire, I was astounded that I was able to add this card to my small pile of Blue Cubes parallels for just $1.65. 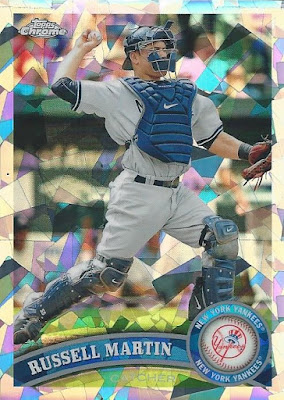 For my probably-not-so-wise attempt to complete a 2011 Topps Chrome Atomic Refractor set, we have two more contributions in today's "blaster", catcher Russell Martin at $1.50... 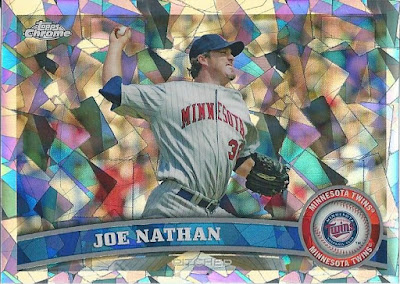 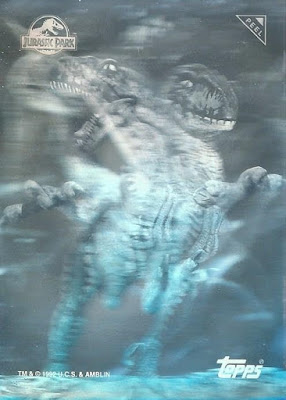 I've mentioned a few times that I was a huge fan of Jurassic Park when the movie came out in 1993.  Hell, I still watch it probably once a year.  Over the past year or two I've developed a small collection of cheaply-acquired dinosaur cards because of this.  When I remembered that there was actually a Jurassic Park set from Topps, and that it had hologram inserts, I immediately hit up COMC and tracked down this velociraptor for 85 cents.  Looks great in hand. While we're on the topic, here's one more of those lenticular 3-D inserts I've been collecting from the 2015 Upper Deck Dinosaurs set.  Up to a baker's dozen now, and I think I got a good price on this one at 74 cents because I believe the aquatic and flying dinosaurs at the end of the checklist were short-printed. 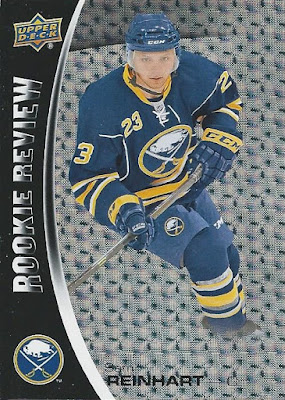 Here's another Sam Reinhart RC that I picked up a few years back during said rookie season.  A nice shiny card, but honestly I wouldn't shell out the 75 cents that I paid for this today as I'm more refined in my collecting and to a certain extent less easily distracted I guess. 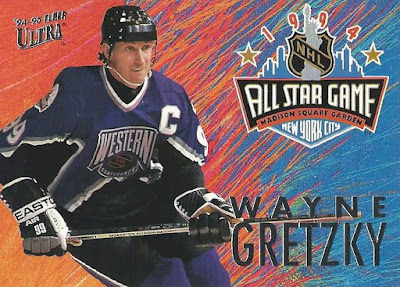 On the other hand, I have no regrets over the 85 cents that I spent to land this Wayne Gretzky '94-95 Ultra All-Star insert.  I'll buy just about any Wayne Gretzky from the '80s or '90s that I don't already have for $1 or less, and I'm a sucker for '90s inserts as well, so this was a perfect fit.  I've got more Gretzky cards at 190 and counting, than any other player in my collection as entered on The Trading Card Database so far.  In fact, I enjoy landing new Gretzky cards so much that I have a small series of posts planned for the blog this year on that very topic! 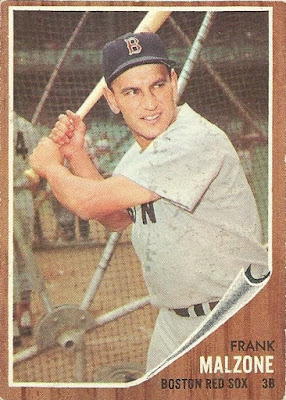 Back to baseball for a moment, I landed this '62 Topps Frank Malzone for 61 cents.  I probably should have offered 62 cents, that would've been fitting.  This card leads me to ask myself why I haven't made more of an effort to prioritize missing '60s Red Sox cards when they can be had for this little coin?  I'm tempted to look but...it's the "Year of Frugality"... 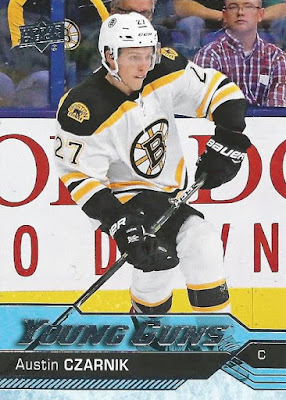 Austin Czarnik actually signed with the Flames as a free agent heading into this season, and has appeared in more than a couple dozen games with the team so far.  I guess I liked this one as a way to remember his couple of abbreviated seasons in Boston, and thanks to the e-Pack promotion the price was right at 75 cents. 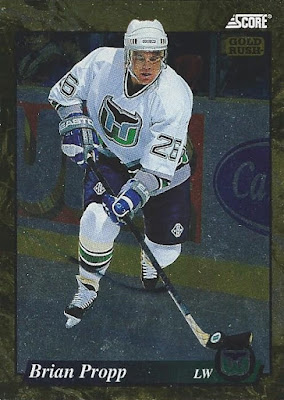 I grabbed this Score Gold Rush parallel of Brian Propp because I must have all the Whalers.  Also, it was insanely cheap at 45 cents.  I should have checked my list first though, as I've already got a copy.  Oh well, I'm sure I can find someone to route this copy to.  Chris the Collector maybe? 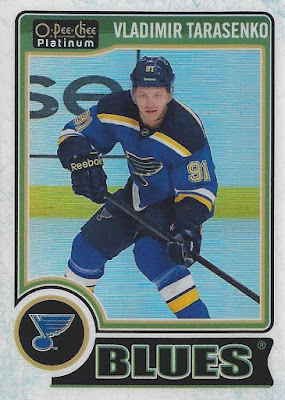 Today's post began with a Blue Cubes parallel, now we've got a White Ice parallel from the same set.  These aren't quite as rare (#'d /199), and don't look as stunning, but I loved the parallels in this release almost without exception.  Plus, Tarasenko is (was?) one of the best snipers in the NHL.  He's certainly having a down year, as are the Blues on the whole.  $1.85 for this one. 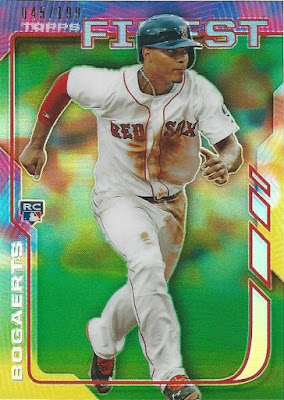 Here's a mid-range, solid addition to my Xander Bogaerts collection.  Always nice to add any new RC of my favorite active player, and bonus points for this one given that 2014 Finest is one of my favorite sets of the last decade.  This is the Green Refractor, numbered along the top to /199.  I paid $3.50 for this one a while back.  I've now got the regular Refractor, this Green, the X-Fractor, and two autos (Blue Refractor and X-Fractor) of Xander from this release.  Would love to add a couple more cards to that rainbow someday. 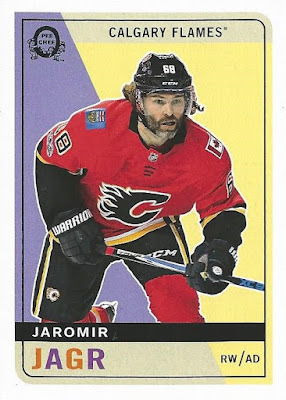 I feel the same about Jaromir Jagr as I do Wayne Gretzky, always happy to pick up any and all cards I don't already have.  I wanted something in my collection to represent Jaromir's stint in Calgary, and again thanks to e-Pack the price on this O-Pee-Chee Retro parallel was too tempting to resist at 43 cents. 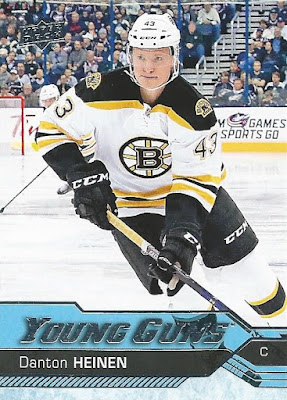 Pretty coincidental that I pulled another 2016-17 Young Guns card, minutes later and from a different drawer, for this post.  Danton is still with Boston, and had a great year last year in his age 22 season (16 goals, 31 assists).  He seems to have found a steady spot on the roster, appearing in 77 games last year, and all but two of the team's games so far this season.  40 cents, thank you once again e-Pack! 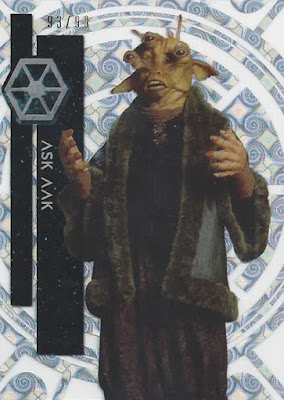 Because I'm all over the map and have trouble focusing at times while browsing COMC, we're actually going to end today's post with a pair of Star Wars cards.  While certainly not a major character, Ask Aak is one I certainly remember and even had the Kenner toy of when I was a kid.  As a lover of acetate cards I enjoy the Star Wars High Tek releases, and snapped up this Tidal Diffractor parallel (#'d /99) from the 2015 set for 70 cents. 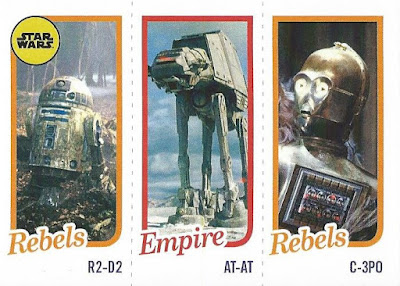 Finally, one of the Topps "TBT" online exclusive releases that really interested me was the Star Wars set done in the style of 1980-81 Topps basketball.  Less than 1,000 of these sets where printed, and based on COMC sales I certainly don't seem to be the only one interested in them.  I brought this one home for $3.62 about a year and a half ago via an accepted best offer.  Cheapest copy today is around $2 more than that.  This is the second one of these to join my collection, and I'd love to track down the remaining four.

Well, we're at $19.95 as far as today's running total goes, just about perfect.  Hopefully you saw a card or two that piqued your interest.  In any event, thanks for stopping by!
Posted by shoeboxlegends at 1:30 PM

I need to add that Jagr to my collection.

Do I need Jurassic Park holograms? No. Am I off to COMC and eBay to find a complete set? Yup.

That's a great card of Jagr in a Flames uni. I'll definitely look for it next time I'm on COMC. And you can never go wrong with Star Wars. Good stuff.