I've been going strong with the 1989-90 hockey autographs in the early part of the year, and this Sunday I have yet another to feature... 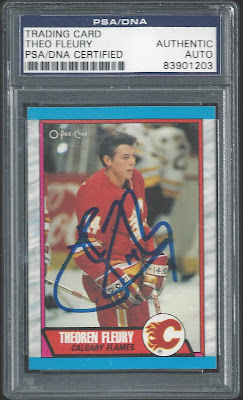 A pretty significant name this week, with the feisty Theo Fleury!  A controversial player at times during his career, Fleury overcame sexual abuse, and subsequent struggles with substance abuse, to average better than a point-per-game over the course of his 1,000+ game NHL career.  Theo played a hard game, and racked up well over 1,800 penalty minutes to accompany his 455 career goals. 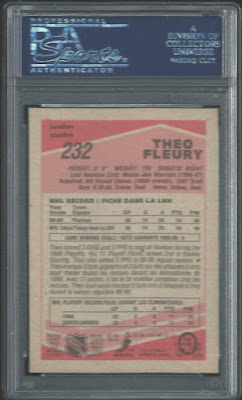 Fleury was a big contributor when the Flames won it all during his rookie season, scoring 5 times and chipping in 6 assists during the team's post-season run to The Cup in 1989.

I love the big, bold signature here, in this case authenticated by the folks at PSA.  Of the handful of cards that I've picked up for this project so far, this is certainly one of the better ones.  Theo is certainly a card-carrying member of the "Hall of Very Good".

I'm really enjoying this autograph project so far, as it's allowing me to sort of collect the very first set of hockey cards that I collected all over again all these years later.

Thanks for stopping by, and enjoy your Sunday everyone!
Posted by shoeboxlegends at 11:00 AM

Nice sig and a cool add to your stack. Even with his years in NY I always think of him with the Flames. He was the franchise.

Loved Fleury back in the day... except when he played the Sharks.

And his rookie card, too! Nice pickup.