The Year of Frugality Begins with Bill Nyrop

I've mentioned once or twice in the first month of the year that my main goal for 2019 is to significantly cut back on the amount of money I'm spending in the hobby.  I'll spare you the boring details, suffice it to say that our household income has been at least temporarily reduced, and pretty significantly at that.  It was a calculated and conscientious decision by my wife and I, and while we're not going to struggle to pay the mortgage or anything, I am attempting to cut back on small, unnecessary expenses like buying lunch at work and...sports cards!

You might think that this would bum me out, but I actually view it as a fun challenge.  The reality is that I've been very fortunate so far in life (and worked very hard, too) and have had plenty of chances to acquire amazing cards over the past decade plus since I returned to collecting.  Slowing it down a bit will give me a chance to spend the time I would spend hunting new cards on appreciating those instead, and posting here more often.  This seems to be working out well, as I've managed a post every single day for the first three weeks plus of the year, by far the best start of the twelve years I've been writing this blog now.

Now, I'm not going to try instituting a card buying "ban" or anything that drastic.  The fact of the matter is, I enjoy this hobby and this community and don't really want to take a year off from that completely.  Instead, having a loose and simple goal of reducing my hobby spending allows me some leeway to enjoy myself, while still giving me a challenge to do so on a budget.

Well, in a bit of irony, my first purchase this year actually came on New Year's Day! 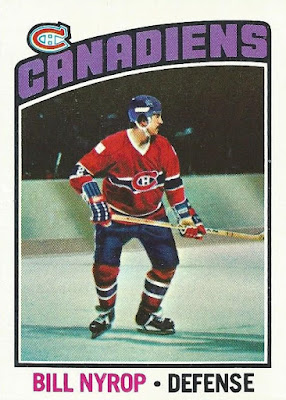 Watching the NHL's Winter Classic that day between the Chicago Blackhawks and the Boston Bruins at Notre Dame, I was intrigued by a piece that NBC did during the intermission on Bill Nyrop.

I was fascinated by the piece on Nyrop, because despite being what I would consider a fairly rabid fan of all things hockey since I was a kid, I didn't have any recollection of the man whatsoever.  I guess I can be excused since he played his final NHL games before I ever drew my first breath, but I'm still surprised I haven't heard more about him.

Anyway, Bill was a very solid defenseman for Notre Dame (of course), and then later for the powerhouse Montreal Canadiens team of the late '70s.  He won three Stanley Cups with Le Bleu-Blanc-Rouge before stepping away to go to law school and start his own practice.  He'd later return to hockey in a coaching capacity, but sadly aggressive colon cancer claimed his life at just 43 years of age in 1995.

I was so interested in Nyrop's story that I decided I'd like to add a card of his to my hockey collection.  At the next commercial break I pulled up COMC on my phone and searched for all of Bill's available cards.  He doesn't have a whole lot out there actually, and it didn't take me long to settle on his 1976-77 rookie card for 99 cents. 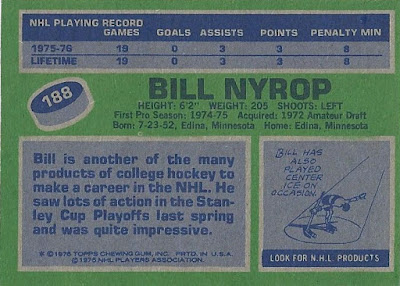 I'm going to try something quite different this year on the blog...I'm going to attempt to publicly track how much money I spend on sports cards over the course of the year.  I think it'll help motivate me to show the cards I do acquire, and also help keep me honest with my goal of being frugal.  It may very well be something I abandon by the time the snow melts, but a goal never set is a goal never met as they say.

It'll be interesting to see how this year for you plays out. Best of luck to you.

I should probably track what I spend. I know it is probably low compared to others, but still more than I probably think I am spending.

Best of luck with tracking your spending. I've tried it a few times... but don't think I ever made it past March.

I've been tracking my card spending for two years now, it's given me some good insights. Because I've been tracking the cards in and out of the house for a number of years, I've gotten in the habit of noting everything in a spreadsheet. Once the routine is established, it's pretty easy to keep up on it.

I wasn't aware of Bill Nyrop's story, I'll have to take a deeper dive into that... I'm only familiar with him from his 1978 Topps card.

One of my minor hobby regrets is that I didn't start buying hockey cards a year earlier... I started collecting hockey in 1977, but that 1976 set is really growing on me!