Just one card to show off today, one of the last few stragglers that came in before I basically ceased spending money on cardboard and other non-essentials and went into sheltering mode.  Behold! 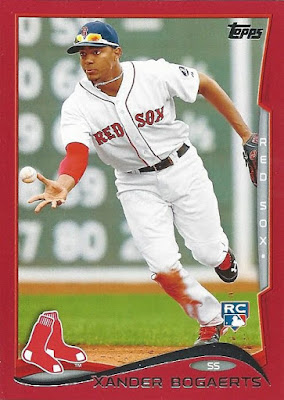 Isn't she a beauty?  That right there is the latest addition to my ever-growing Xander Bogaerts collection to hit my mailbox.  I've coveted this card for years now, since it came out in 2014 really.  Bogaerts is my favorite player, so naturally I'm interested in any rookie card of his, but I'm especially interested in any new variation of his flagship Topps RC specifically.

I did a good job tracking down the colored parallels of this release years ago, back when they were a good deal cheaper, but for some reason this Target-exclusive red parallel eluded me.  Based on my searching and tracking over the years, I'm comfortable guessing that this particular parallel was much less abundant than say its Wal-Mart blue counterpart.

That was part of the reason that I dragged my feet on picking up a copy for so long.  I guess I was convinced I'd be able to find one cheaper if I waited it out, but that day just never came.  Once or twice I found one in the $10 range over the years, but they'd always have an obviously dinged corner or some other drawback that prevented me from pulling the trigger.  Finally, in 2020, I brought one home when my saved eBay search for the card triggered an email making me aware of this copy, in great condition, for an even $20.  That price point is about half of what I see most copies listed for these days. 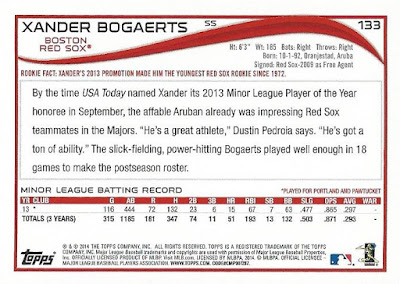 Here's a look at the back, which is pretty much the same for all of the different colored parallels in the set.

As I mentioned, this was the biggest glaring hole in my collection of Xander's Topps RC parallels.  Now that it's in hand it joins these others... 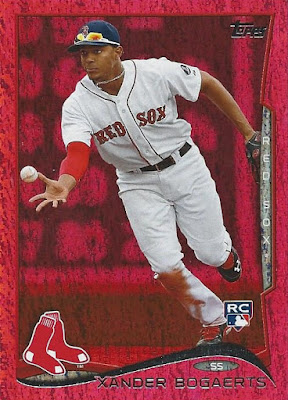 The other red parallel is this "Red Hot Foil".  I think these were also available in Target packs, if not elsewhere as well.  This one, and the standard Target red that I just acquired, look pretty sharp.  A Red Sox fan you can't really ask for a better colored parallel than this.  While these cards are definitely gaining in popularity as Bogaerts gets more recognition for his play over the years, you can still land a copy today in the $10 to $15 range. 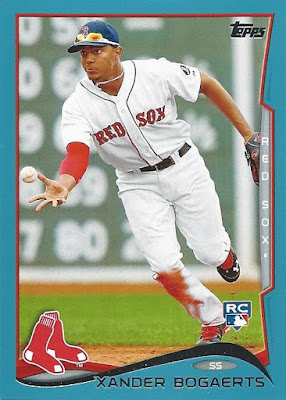 Similarly, as I mentioned above, the Wal-Mart blue parallels are not quite as rare as the Target red ones.  Like the Red Hot Foil card that preceded this one, you can still find these for around $10 or so, though I'm willing to bet that won't be the case for too many more seasons. 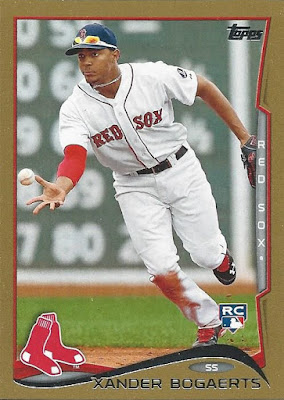 The lone serial-numbered card in this post would be this Gold parallel.  As is standard for Topps in recent years, these are serial-numbered to the year of the set's release, so there are 2,014 of these puppies floating around out there (or less, assuming a few have been misplaced or destroyed).  If you find one of these for $40 or less you've happened upon a decent deal.  Not kidding.  In fact, it's probably time I take every card in today's post out of their penny sleeve/top-loader setups and move them into Ultra Pro OneTouch magnetic holders instead. 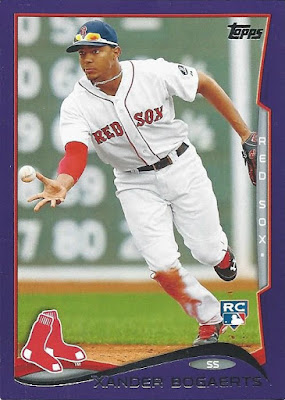 Next up, the purple parallel, which was available only in packs purchased at Toys 'r' Us locations.  Boy am I glad I grabbed one of these back in the day.  The evidence is anecdotal, but this may be the rarest parallel in today's post.  For example, right now this card is not available on COMC at all, and the cheapest of the two copies listed on eBay is $139.99.  Yes, you read that correctly. 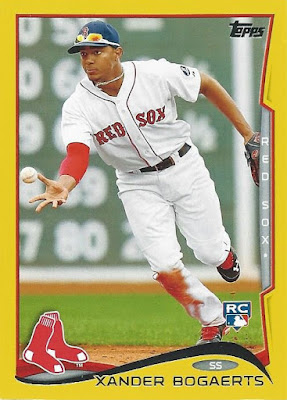 Just a couple more here, a pair of quite colorful ones to finish off.  This yellow parallel (Walgreens exclusive?  I'm truly unsure) is the most blinding, bringing back memories of 1991 Fleer.  This one appears to be quite rare, on the level with the Toys 'r' Us purple, or possibly rarer.  Maybe I'm not searching correctly, but I can't locate a single copy available on COMC, eBay, or anywhere else for that matter.  A rare gem for my Bogaerts collection indeed! 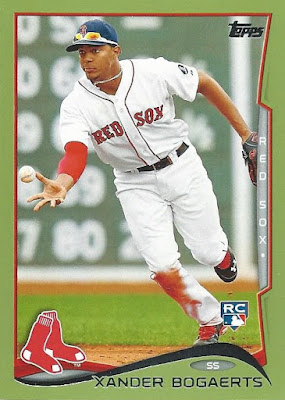 Bringing up the caboose is the green parallel.  I'd guestimate that this one is roughly on par with the Gold parallel in terms of price point and collector desire.  If you're a Bogaerts or Red Sox collector interested in this card, and you see one for less than $40, you probably want to grab it quickly.

So, there's my current collection of Bogaerts' standard Topps RC parallels.  Feels great to plug that Target red hole after all these years of waiting.  The only other version of this card that I could realistically see myself pursuing someday would be the Camo parallel, numbered to /99.  Only a couple available out there right now, and both well into the triple digits.  In the current economic climate that's just not a number I'm comfortable spending on a baseball card.  So, that's a wrap for now.

Then again, Xander's Topps Chrome rookie from the same year, and featuring this same image, has plenty of available parallels of its own.  But, that's a story for another day!

Thanks as always for stopping by...
Posted by shoeboxlegends at 6:00 PM

That's quite a collection, and a great addition to it. I need to try and round up a few of those for myself.

An impressive rainbow going for a sharp card.. congrats!

I've never tried to build a rainbow myself, but I love seeing ones other people have collected. Congrats!

Quick sidebar -- one of my best finds ever, monetarily speaking, was a Target Red Mookie Betts rookie from 2014 Update I got out of a 5/$1 box. I didn't realize how difficult/expensive those retail parallels become over time until I got curious one night and checked out the prices. Needless to say, I was floored.

Nice rainbow. Congratulations on finally adding it to your collection. I really like it when the borders match the team colors.

That's a killer collection of Bogaerts Rcs! Congrats on finding the Target red parallel at a good price.