I've been absent from the blog here, and from pretty much all aspects of my personal life, over this past week.  I've got a major project going on at work that has basically had me working around the clock since Monday, and I've logged around four hours a day of drive time as well during that stretch.  Tomorrow will be much of the same unfortunately, so I don't have a lot of time tonight.

I do want to get something up on the blog though, so why not a fantastic T206 tobacco card?  A couple of years ago I started in earnest on a Red Sox team set, but after showing off my first four acquisitions I trailed off, sidetracked by other things.  Well, tonight we get back on track and I present my fifth T206 Red Sox card: 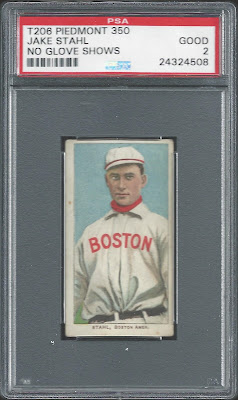 There's not much I can say about these beauties that hasn't already been said many times, and by much better writers than myself.  All I know is that these cards absolutely deserve their lofty reputation as far as I'm concerned.  I count the handful that I have among my most prized pieces of cardboard.  In fact, they've been displayed atop one of the bookshelves in my office for the past year or two now.

This one is kind of cool as well given that Stahl's other variation in the set was the first T206 I ever owned.  Aesthetically speaking I think I prefer that one actually, but this "no glove" variation is slightly rarer if I recall (cost me a few bucks more, anyway).  Whatever the case, it feels good to have both Stahls now in hand. 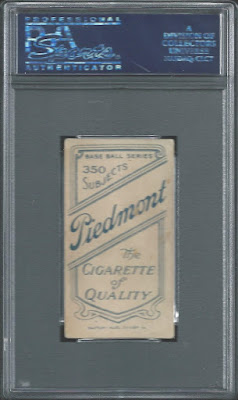 For my purposes I just want any one example of each Sox card in the set, and am not going to bother trying to accumulate multiple copies of the same card with different backs.  In the case of tonight's card, as you can see we've got a Piedmont back.  There are twelve variations of Red Sox cards in total under this scope, so my next acquisition will put me at the halfway mark actually!

On a blog-related note, I've decided to create a page for tracking my really old (pre-1950) Red Sox cards.  My collection has gotten a bit disorganized since the demise of Zistle, but one of the areas I want to focus on getting cleaned up are my oldest Boston cards.  I'll be back-filling some that I've already shown here in the past, and adding some new ones that I've had in queue for a while (like Jake here) very soon as well.

To check it out, just click the "Old Sox" hyperlink below the blog banner.  Thanks for stopping by!
Posted by shoeboxlegends at 10:46 PM

Fantastic. These are little works of art. Congrats on the great 'get'.

Awesome card and it looks like it is in very nice condition as well.

I know there are a lot of T206 collectors, but I don't see many of the cards on blogs. Thanks for sharing!

What a great card!

Is there anyone who doesn't appreciate cards from that era? Certainly I do. I trust your bookshelf doesn't get direct sun.