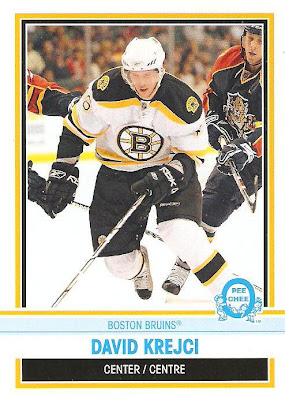 David Krejci seems to really be finding his game after a slow start to the season. He lit the lamp twice in last night's loss to a very talented Chicago Blackhawks team on the road in Chicago; the game's first goal in the opening period and another in the waning minutes to send the game to overtime. The Hawks are an outstanding team and the Bruins will gladly take the 1 point on the road.

The card featured above is the "retro" parallel from this year's O-Pee-Chee set. It looks alright I guess but doesn't appear to be based off of any actual set, which is a disappointment after last year's 79-80 parallels, which were the highlight of the set in my opinion. Below is his 05-06 In the Game Heroes and Prospects base card.

The Bruins are in Toronto tonight for the first time this year, in the midst of a 3-games-in-4-nights stretch. With any luck I will be able to post another Krejci card tomorrow! 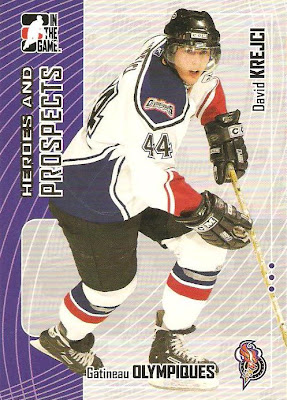 Posted by shoeboxlegends at 3:30 PM