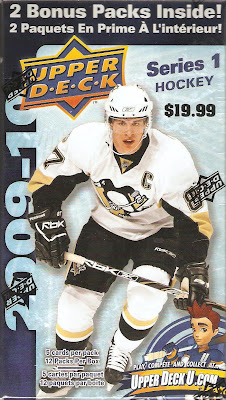 I still haven't purchased a hobby box of 09-10 Upper Deck Series 1 hockey yet, despite it being the first (and so far really only) hockey set of the year that I'm going to collect. In the meantime, I was in Target picking up some cold medication for my fiance and they actually had 2 or 3 blasters left so I picked one up. You get 12 packs in a blaster, but they are smaller 5 card packs. Short-printed Young Guns rookies are found at 1:6 packs in these smaller packs, so each blaster should net 2. In the interest of time, I'll show my favorite card from each of the 12 packs... 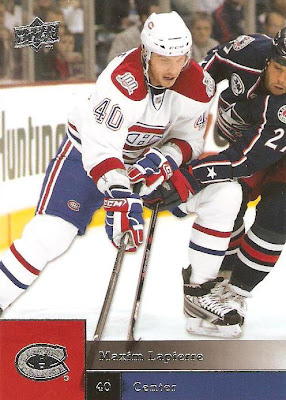 Pack 1 - Maxim Lapierre Base - Pack 1 yielded 5 of the more boring base cards I've seen so far. I needed 4 of them for my set though, so still a good pack. 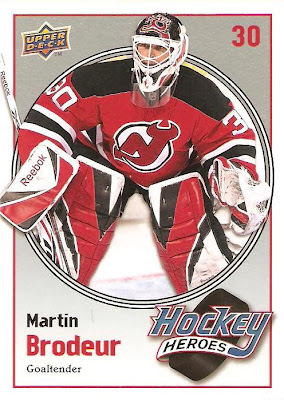 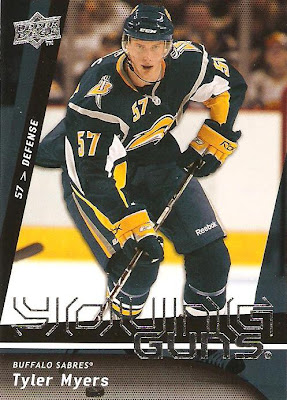 Pack 3 - Tyler Myers Young Guns Rookie - My first of two Young Guns short prints, and I'm very happy with this one. Aside from the Tavares, this is one of the cards I was hoping to pull most. This 19-year-old defenseman stands at 6'8" and has been seeing steady time with Buffalo. He's got a few things to learn given his lack of experience, but he is a smooth-skating giant on the ice, and I'm betting he'll be an impact player in years to come. 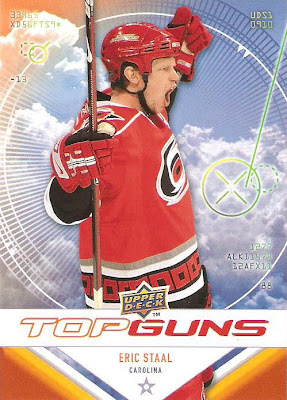 Pack 4 - Eric Staal Top Guns Insert - I wasn't impressed with this insert set when I pulled the Parise, and I'm still not impressed after pulling the Staal. Boring! 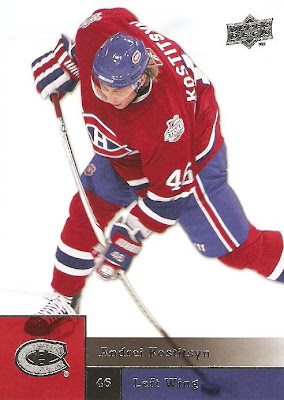 Pack 5 - Andrei Kostitsyn Base - Two of the cards in this pack were doubles, severely limiting my choice for favorite card. I settled on this one. 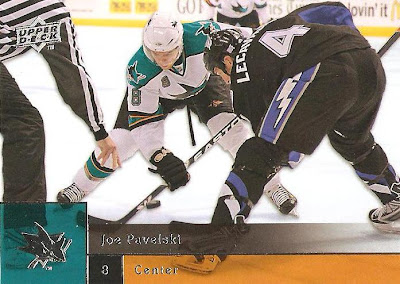 Pack 6 - Joe Pavelski Base - Three doubles in this 5-card pack, probably the worst single pack in the box. 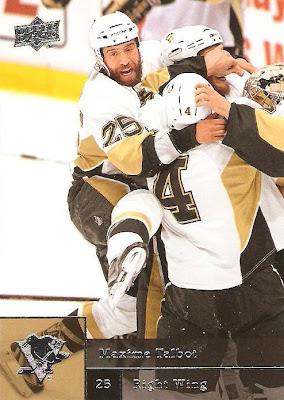 Pack 7 - Maxime Talbot Base - PatsCards commented on an earlier pack break saying that the Marc-Andre Fleury base card may be a shot taken shortly after the Pens clinched the cup. I'm thinking this was shot moments later. 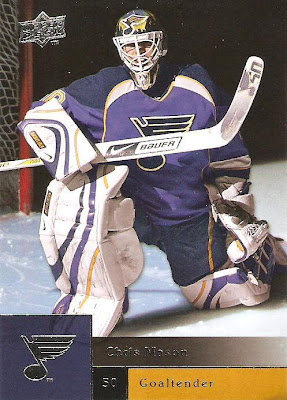 Pack 8 - Chris Mason Base - I just like the lighting (or lack of it) in this card. Judging by the shadows and the fresh sheet of ice, this picture was probably taken during team/player introductions. 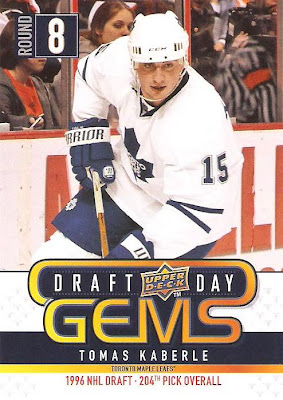 Pack 9 - Tomas Kaberle Draft Day Gems - This is the first I've seen of the Draft Day Gems insert set, not sure if it's retail only. I like this better than Top Guns at least, that's for sure. Kaberle's having a great year in Toronto, I had no idea he went in round 8 of the draft. What a steal! 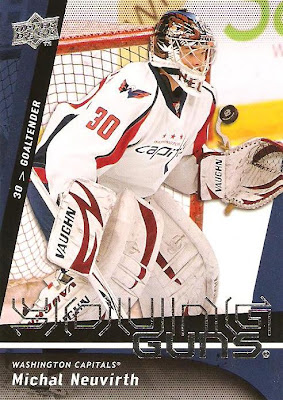 Pack 10 - Michal Neuvirth Young Guns Rookie - My second Young Gun short print wasn't quite as good as the first. Michal saw action in 5 NHL games last season for the Caps, going 2-1. This year he's played in 2 games for Washington, both losses. On a side note, how come whenever I search any up-and-coming hockey player on Google, the first thing the search engine tries to auto-fill as I'm typing (aside from just the player's name) is "player name - girlfriend"? Don't believe me? Try it! There are some strange people out there... 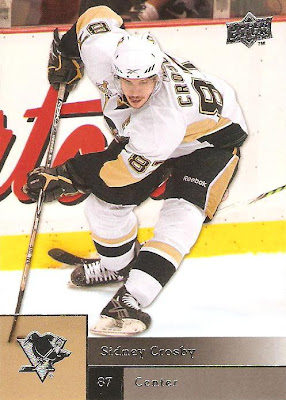 Pack 11 - Sidney Crosby Base - We're finishing up strong with a Sidney Crosby base card. You might want to think about shedding that moustache buddy... 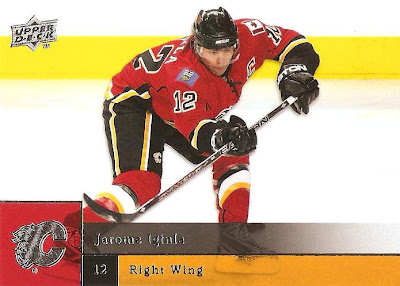 Pack 12 - Jarome Iginla Base - Another pretty good base card to end the break.

I was extremely happy with this blaster overall. Before ripping this, I had 81/200 base cards and 5 Young Guns rookie short prints. The 60 cards in this blaster yielded 40 new base cards that I needed, bringing me to 121/200. Add to that the 2 Young Guns rookies, one of which I really wanted, the 3 inserts, and 15 doubles for trading and I'm a happy customer. Just to be clear, there weren't 15 doubles in the box, I just happened to have these 15 cards from what I'd busted previously.

If you're going to try building this set, there is very little incentive to go with hobby over retail. Here's what you'll get out of a hobby box for around $63:

6 Young Guns rookie short prints (7 if you get lucky at 1:4 in your retail pack)

Let's face it, if you collect base Upper Deck you're probably not seeking hits, just the base set and the Young Guns rookies. If that's what you're after buying retail is as good as picking up hobby. I think I'll do one more blaster of this stuff and then get a want list and trade list up.

Posted by shoeboxlegends at 8:40 PM