When I found out a few weeks back that Casey from Drop the Gloves was parceling out his Hockey Hall of Fame autograph collection, I was at first a little disappointed.  Only because I've gotten to know Casey through comments and emails exchanged over the past few years, and although we never had a chance to meet in person before he moved out West, I consider him a hobby friend.  I was sad to see him (seemingly) slowing his collection and presumably his blog, although I certainly understand how the love of cardboard waxes and wanes.

Anyway, once that feeling passed I did what any good collector would and looked over his list of cards for sale to see if I could give any a good home!  In the end, we agreed on a more-than-fair deal that brought two new on-card HOF autographs to my hockey card collection.  For this week's Signature Sundays post I'm showing the first of the two, Mike Bossy: 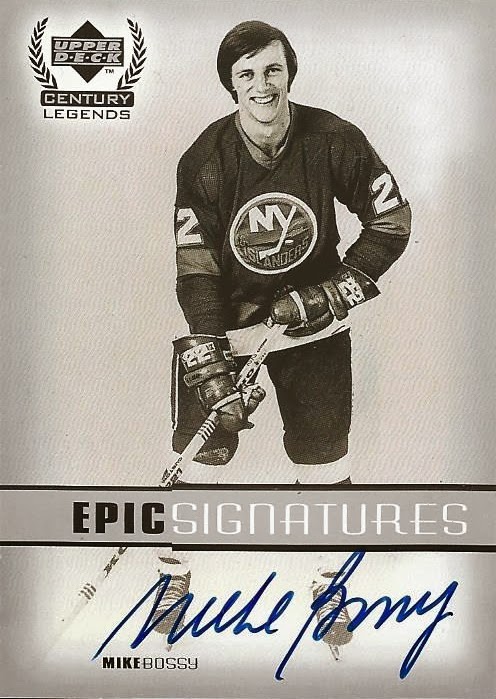 There's not a whole lot I can say about Mike that every hockey fan doesn't already know, but he is most known for being an absolute sniper.  His goal-scoring resume is just amazing.  Mike is one of just five players in the history of the game to achieve 50 goals in 50 games (Wayne Gretzky, Mario Lemieux, Brett Hull and Maurice Richard are pretty lofty company).  He scored 573 regular season goals despite a career that lasted just 10 years!

Twelve teams passed on Bossy in the 1977 draft (a couple of them twice) because he was considered timid, but the Islanders wisely selected him with their 1st pick, 15th overall.  This choice would shape the future of their franchise and bring more success to Long Island than anyone sitting around that draft table could have possibly imagined.

This guy had the balls to predict that he'd net 50 in his rookie season in the NHL, and he actually backed it up with a 53-goal Calder Trophy season.  I wasn't even born yet, so I have no frame of reference, but this just seems completely amazing to me.  The Islanders would win the Patrick division in Mike's rookie year, but lost a heartbreaking 7-game first-round series when they were upset by the Maple Leafs (Mike chipped in 2 goals and 2 assists in the series).

Returning for his '78-79 sophomore season, Bossy must have used this loss as motivation, as he turned in a career best 69 goals and topped the 100-point plateau for the first of many times.  It's crazy to look at his numbers, but he basically didn't really drop off at all in terms of production when he transferred from Juniors to the NHL.  Insane.  The Islanders were the best regular season team in the league, earning the #1 seed in the playoffs, and this time they won their first series handily, sweeping the Blackhawks.  Everyone must have been awaiting an epic Finals pitting the Islanders against the Canadiens (the #2 seed and clearly the other team in the league that was heads above the rest), but Bossy and his teammates were again upset.  This time it was the New York's other NHL team, the Rangers, who did them in in the Conference Finals.

After two tough playoff eliminations to begin his career, the rest is history.  Bossy and the Islanders would win the next four consecutive Stanley Cups, absolutely owning the early '80s.  Mike would score over 100 points in those four playoff campaigns alone. 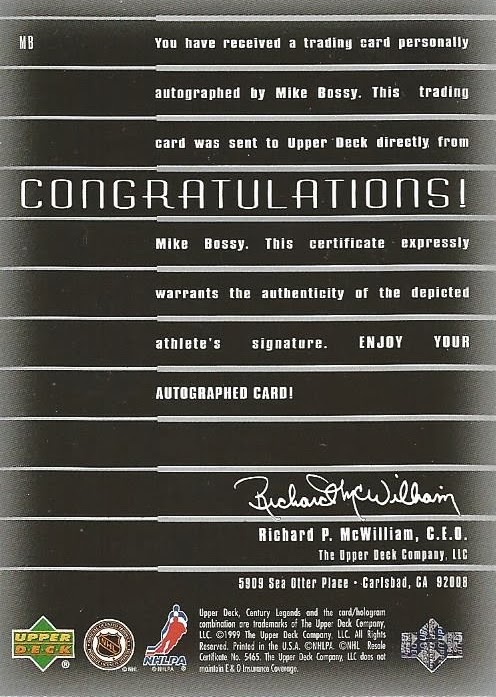 Mike Bossy is one of the best pure goal-scorers in the history of the game, period.  Only two players have scored 50 or more in a season 9 times.  Gretzky did it 9 times throughout his career.  Bossy did it his first 9 seasons in the NHL before injury forced him out of the game.  He's also the only other player aside from Gretzky to score 60 goals in a season 5 times.

Mike wasn't just a regular season scorer without any playoff grit.  He once scored all four game-winning goals in a playoff series for the Islanders, and scored the Stanley Cup winning goal in back-to-back seasons during the early '80s run.  In addition to the Calder Trophy for Rookie of the Year, he won a Conn Smythe, multiple Lady Byngs and was a many-time First Team All-Star.  He was inducted to the Hockey Hall of Fame in 1991, and his jersey number has been retired by the Islanders.

If you've made it this far I have one more fact for you that makes all of the above that much more amazing...Mike Bossy skated in his final NHL game at age 30!  I am really happy to be able to add Mike's signature to my hockey card collection at last.
Posted by shoeboxlegends at 11:54 AM

That card is in my collection as well and I'm glad to have it. I think over all hockey players take the time to write a nicer signature than baseball players do. Maybe they have less cards to sign. Or maybe they're less spoiled.

BTW, I am in the process of a complete overhaul of my blog/website. Be on the lookout!

I grew up watching Mike Bossy for my Islanders. I remember his 50th goal in the 50th game. Bossy is my all time favorite hockey player and one that I collect.

That is one card I don't have in my Bossy PC. I will be on the look out for it on eBay.

Great score and I think a Bossy auto is a must have for all hockey collectors.

Bossy is one of the deadliest shooters I ever recall seeing.

Thanks guys, and Casey I will definitely keep an eye out!