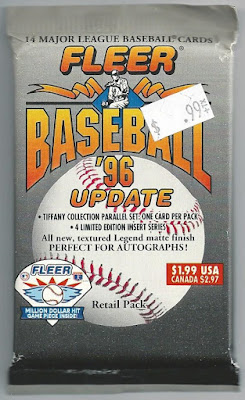 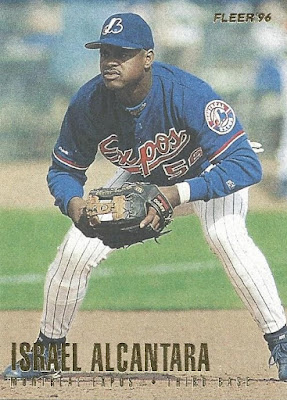 Here's my first card, Izzy Alcantara of the Expos.  Fleer was doing some prospecting here, as Alcantara wouldn't appear in a Major League game until the year 2000 (with the Red Sox!). 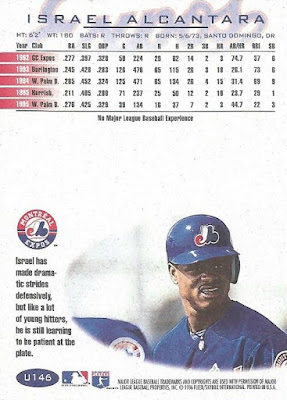 Here's a look at a back, which I think Fleer did a nice job w ith actually. 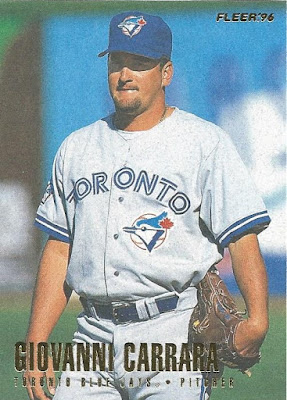 The design on the front is very minimal, and the cards are a matte finish rather than glossy, which is something unusual that 1996 Fleer is remembered most for. 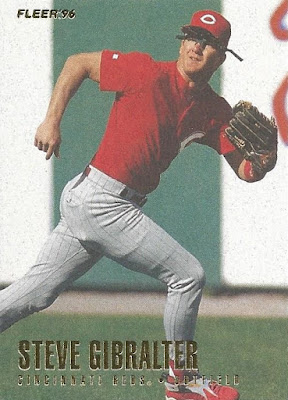 Fleer seemed to do a good job producing a true Update set here, unlike the All-Star and subset-saturated offering we've gotten from Topps of late.  The last two guys here appeared in just a handful of games each for their respective clubs in '95 and '96, yet made the checklist. 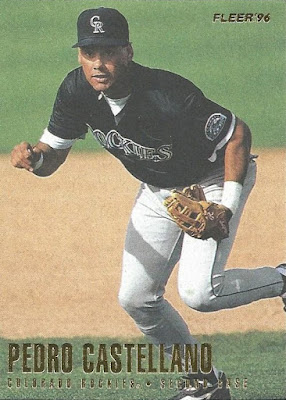 Here's another one, as Pedro Castellano appeared in a total of 51 career games, all with the Rockies between 1993 and 1996.  Yup, if you like cards of obscure players this set is for you! 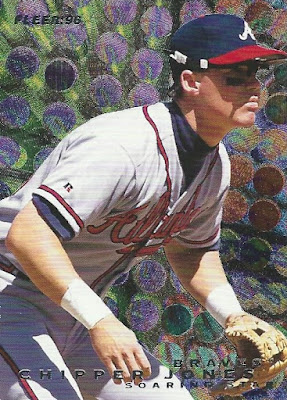 I received one insert, and I think I did pretty damn well with it.  This "Soaring Stars" Chipper Jones card is perfectly '90s.  Looks kind of like something you'd expect to see in a Metal Universe release. 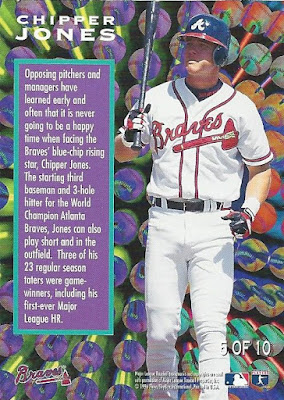 Here's the back, every bit as loud and gaudy as the front! 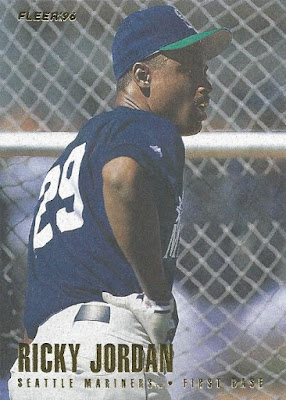 The 15 games Ricky Jordan played with the Mariners in 1996 were the final of his MLB career. 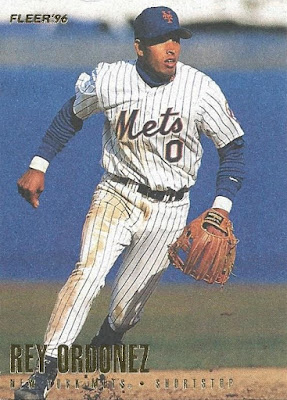 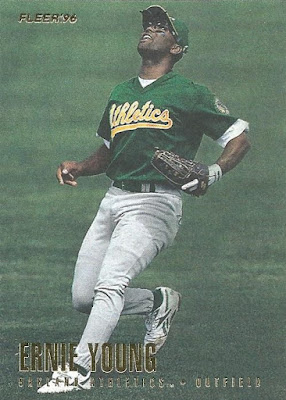 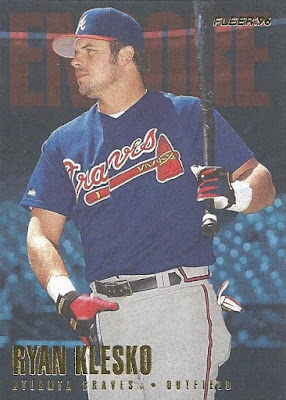 Had I actually opened this pack back in 1996, this may have been my favorite card.  Klesko was a beast that year, clubbing 34 home runs (which would turn out to be a career high). 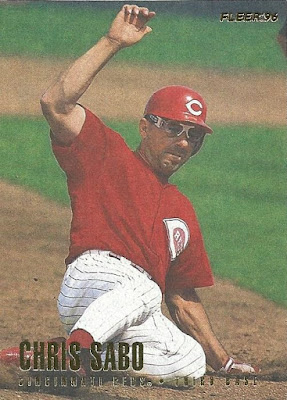 Sweet, an appearance from Mr. Rec Specs himself, Chris Sabo! 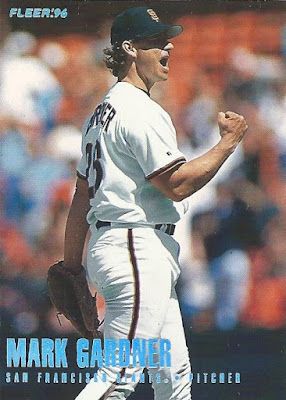 This is a "Tiffany" parallel, which I believe fall one-per-pack.  They have a glossy finish, and use a shinier/rainbow foil. 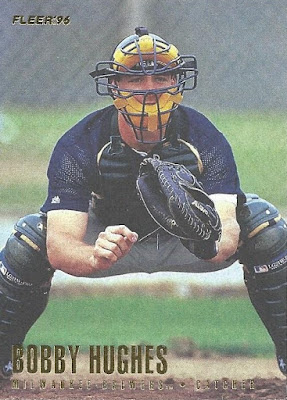 Bobby Hughes finally broke through to the Bigs in 1998.  He appeared in 133 games for Milwaukee between '98 and '99, and that was it for Hughes. 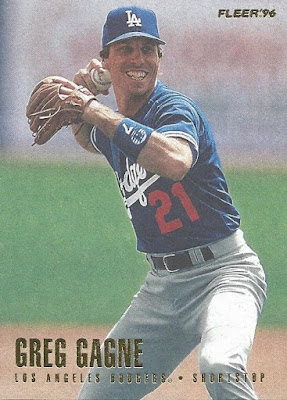 Greg Gagne signed as a free agent with the Dodgers in late November, 1995.  My assumption is that based on this date, Fleer couldn't get a shot of him in a Dodgers uniform into the flagship set in '96, thus here he is in the Update release.

That's quite a facial expression from Gagne.  Is it me, or does he not look like he just spent a snowy winter in the Overlook Hotel? 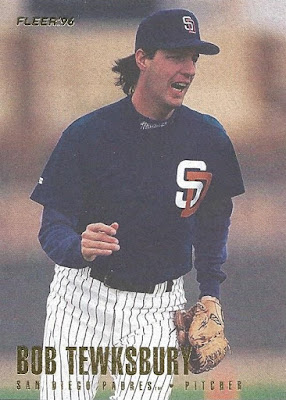 Last card here.  Bob Tewksbury had been around forever at this point.  Like Greg Gagne though, he signed late in the 1995 off-season for what would be his lone season with the Padres in '96. 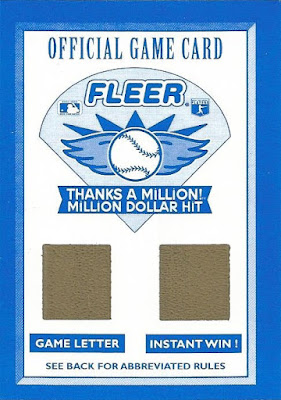 Each pack comes with a scratch-off game card as well. 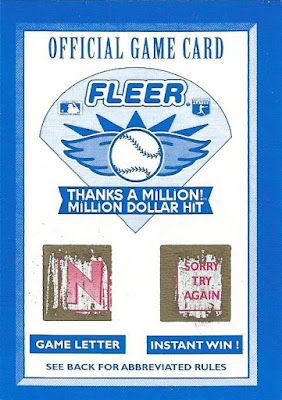 I didn't win anything, oh well.

That was a fun rip overall, and a good excuse to kill some time typing a blog post as well, all for a dollar.  No complaints here!
Posted by shoeboxlegends at 9:43 PM

This is the first post I have read on your blog. I really enjoyed it. I collected while growing up for a few years, but stopped around 1992. I just recently started collecting again. As a Braves fan, I found that Chipper Jones card to be really cool.

Thanks Jason, I appreciate the comment! I hope you find as much enjoyment out of the hobby the second time around as you did the first!

I like the minimalist design of these cards. I sure do miss 90s cards as well. Thanks for the trip down memory lane.

Nice Chipper and not bad photography over all. I like the name "Steve Gibralter". Think anyone called him 'Rock"?

If I was ever gonna become a TTM guy... I'd probably start with a bunch of these cards. They're perfect for getting signed.

I really liked 1996 Fleer, which is especially notable considering how much I (and nearly everybody else) hated 1995 Fleer. Player selection like this is why I prefer Heritage Hi #'s over Topps Update (even if Hi #'s is relatively overpriced).

That Sabo card is really nice. It would've been the highlight of the pack for me.

Fuji touched on my thoughts about autographs. I always loved these cards because even in 1996 I felt like they were "old" because of the non-glossy finish. I bet these would look really great signed in a silver or gold sharpie. Not going to lie, I'm thinking about maybe trying to find a couple of boxes of these on ol' feeBay.

Never heard of at least four of these guys. And that Chipper card looks like it might have been a rejected design from the prior year.