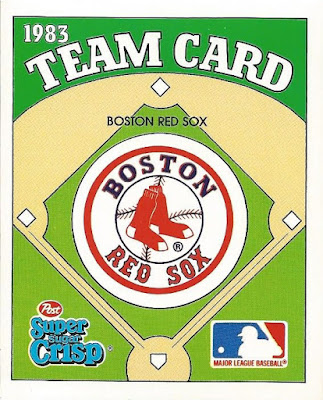 I am long overdue in thanking my friend Mark Hoyle for a great PWE he shipped me a few weeks ago now.  Within just a few "cards", Mark managed some pretty amazing variety!  Like the 1983 Post team card you see above, for example.  Never seen one of these in my life, in fact I had no idea they even existed.

I'm too young to remember Super Sugar Crisp, but I'm guessing that maybe it was the predecessor to the Golden Crisp cereal that I ate plenty of growing up? 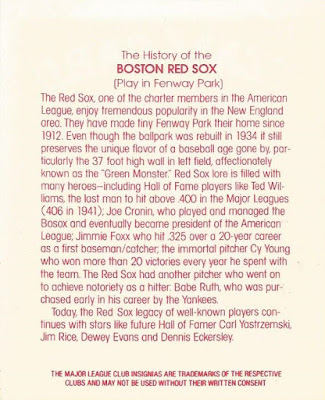 Here's the back, which I guess does about as good a job as you can of summarizing decades of baseball in just a paragraph or two. 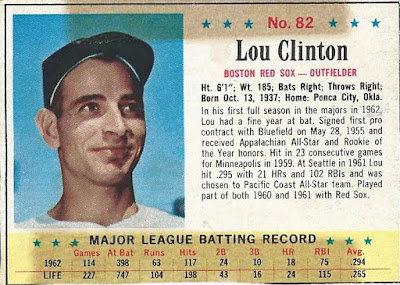 How about another oddball from a couple decades earlier?  This miscut and tape-stained '63 Post Lou Clinton is fantastic.  I'm up to a handful of '60s Post Red Sox cards now, and this is not the first one I've received from Mark! 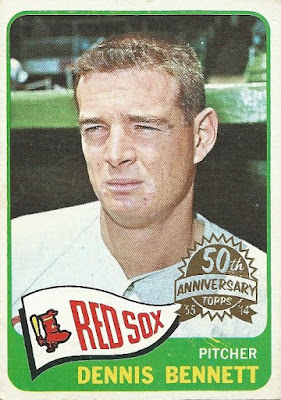 Now we're getting to the meat and potatoes of this latest PWE.  I'm really starting to sound like a broken record saying it, but I like any and all Topps buybacks from the past few years.  Seriously, if you can't stand them, it's no problem, just send them to me!  Mark really hit a home run with this one as obviously I prize Red Sox buybacks above all others.

I had a moment of panic where I thought I maybe already had a copy of this card, it seemed familiar to me as a buyback.  Turns out I did, and I didn't.  I had one from a regular Topps release, and this one is from Topps Heritage which has a different stamp.  Yes, it's gotten to the point where I have two different buybacks of the same card, and I don't mind in the least! 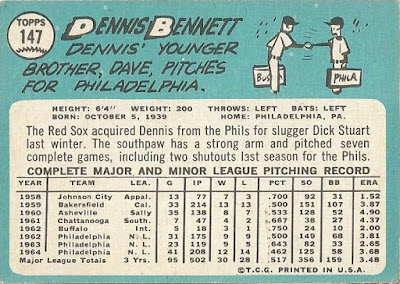 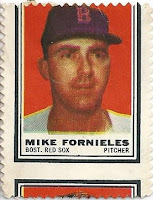 See what I mean about Mark being all over the map?  This is a stamp insert from 1962 Topps.  Not that they're super rare or anything, but I don't think I've ever even seen one of these in person, and I know for a fact this is the first one in my collection.  Very cool stuff, and if I ever end up with another one I can send this to Jeff at 2x3 Heroes since it's a glorious mis-cut. 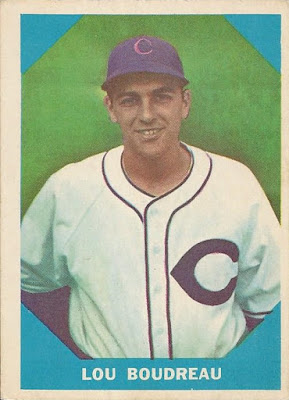 I'll close out this brief post with what is probably my favorite card from the entire package, a 1960 Fleer Lou Boudreau!  This is a set I would love to put together someday, but as it stands right now I think Lou is only my fourth or fifth card.  The player selection is perfect too, my collection is embarrassingly short of Lou Boudreau cards.  What a great piece of cardboard! 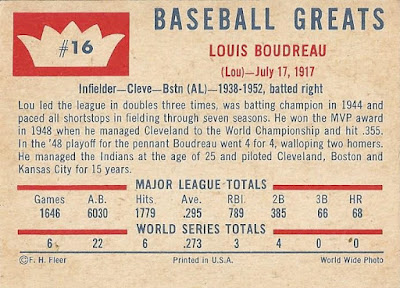 Mark, thanks for another killer batch of cards my friend!  I will see if I can put together a return package of Sox for you in the coming weeks.
Posted by shoeboxlegends at 5:43 PM

Wow, nice batch. I have never seen Fleer cards from the 60's before. I really like the backs of them.

Getting back on subject, that's a damn fine selection of stuff from the esteemed Mr. Hoyle. I love the Post card, but I'm not quite sure why. Maybe it's because of the Sugar Crisp...

Same thing happened with Sugar Pops. I guess Sugr is a four letter word. Any friend of The Good Kid is a friend of mine.

I'm glad the cards filled some needs. I really like the early Fleer sets. with the two early 60's Fleer sets I try and collect any player who spent anytime with the Sox.,

On that Post Lou Clinton card he's about 25 years old or so. He looks remarkably like my Dad at the same age.


Hoyle sends out some cool stuff doesn't he?