One of my favorite type of cards to collect are those of players who last at the highest level of their sport far longer than their competitors are able to.  Guys like Jaromir Jagr, who only just wrapped up his NHL career this past season, or Bartolo Colon, who's still taking the mound at 44 years of age.

This week's Signature Sundays subject was certainly one of those players! 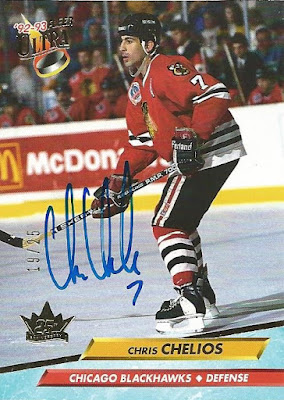 Love this one!  I just can't get enough of these '92-93 Ultra buybacks from last year's Fleer Showcase release.  I'm probably up to around ten or so now, with Chelios here being my third autograph (Nick Lidstrom and Jaromir Jagr are the other two).  Yeah, I'm hopelessly addicted to these throwbacks to my childhood collecting days.

Chelios was one of the league's premier defensemen for a long while, including during my formative years as a kid fan between 1989 and the mid-'90s.  He's a three-time Stanley Cup champion, a member of the Hockey HOF, and was recently voted one of the top 100 players of all time.  To me though, the most impressive thing about his career... 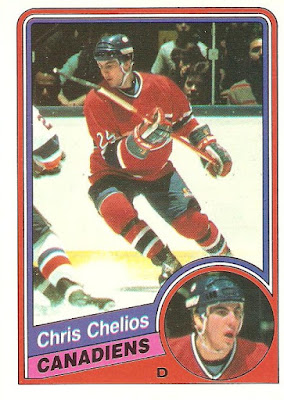 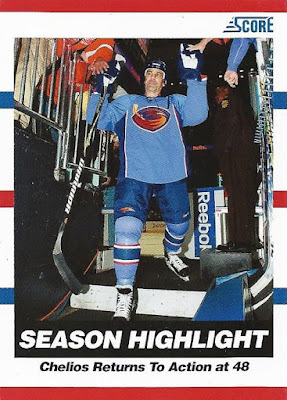 ...and played his last game in 2010!  At the age of 48!  Only the great Gordie Howe, during his comeback season in 1979-80 with the Hartford Whalers, ever skated in an NHL game at an older age than Chris.  If that doesn't make you feel just a little better about getting older then I'm not sure anything will. 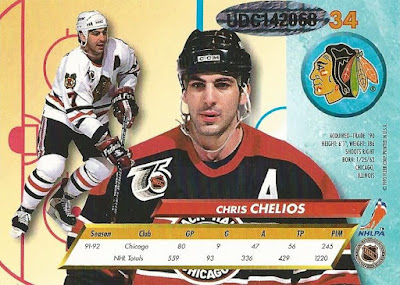 Here's the back of the card (just about everyone producing trading cards today could learn a thing or two from '92-93 Ultra if you ask me).  These are limited to 25 copies each, and the serial number on the hologram sticker there... 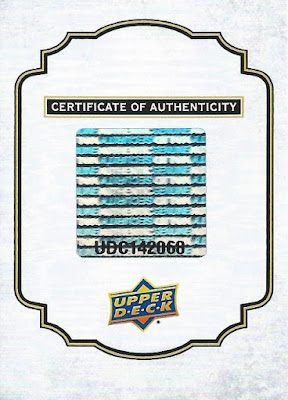 ...is linked to the serial number on the CoA that comes with the card.

Yup, I'm pretty pumped about this week's autograph addition.  I like that Chris included the proper uniform number to go with his signature.  This is something he clearly pays attention to, as the Panini Classics Signature autograph of his that I landed a few years back has a signature that references #24 to match the Canadiens sweater he was wearing in the photograph.  Kudos to Chelios for that level of attention to detail!

Thanks as always for spending a few minutes of your time here.  Who's your favorite "ageless wonder"?  Any players that you collect in particular for that reason?  If so I'd love to hear about it in the comments...
Posted by shoeboxlegends at 9:33 PM

That's an awesome Chelios auto! I'm a huge fan of 92-93 Ultra and the buybacks bring back a lot of great memories. My favorite "ageless wonder" would have to be Jaromir Jagr, but I'm always happy to see an over-40 athlete have success (except Tom Brady - he's had enough!)

That's a wonderful addition. I'd love to have it in my Blackhawks binder!

"Honey Nut" was one heck of a player. That's sure one sweet looking buyback. I have a Paul Coffey buyback from the same set. If you have any interest just let me know.

Chelios was the man! I knew he had a long career, but had no idea he wrapped things up at 48. That's insane. Off the top of my head, there are four guys who played into their 40's that I collect: Tony Gwynn, Brett Favre, Martin Brodeur, and Ichiro Suzuki. Might be a few more... but it's almost 9pm which is close to my bedtime.

I need to comment again, just wanna say the Fleer Ultra backs were awesome. You're right, Upper Deck could learn a few things from the junk wax when it comes to design.