May the Fourth Be with You

Would you expect anything less on Star Wars Day here at Shoebox Legends than... 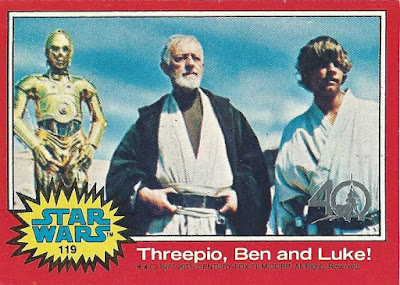 ...Star Wars buybacks!  I know, how predictable.  What can I say?  Star Wars and buybacks, two things I enjoy, combine to make these cards irresistible.  They were inserted into last year's 40th Anniversary set.  I haven't picked any up in a long time, or even looked for any for that matter, but the four in tonight's post bring me to eleven in total which is a decent little collection. 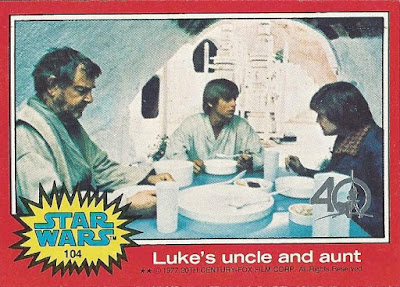 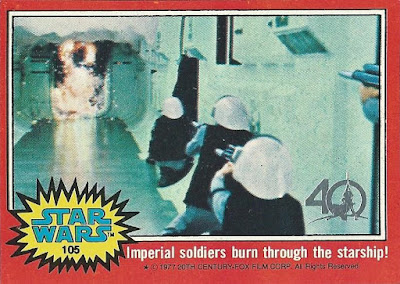 I plan to watch the original trilogy over the weekend to celebrate, beginning with Episode IV later tonight (assuming this Bruins/Lightning game doesn't go to triple overtime). 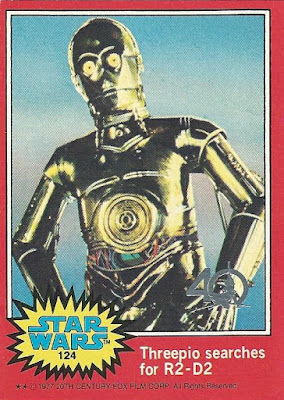 How about you?  Are you a fan of the Star Wars films?  If so, have you landed any notable Star Wars cards lately?

For those of you who just aren't Star Wars people, don't worry, I'll be back with some sports related content tomorrow.  May the Fourth Be with You!
Posted by shoeboxlegends at 9:00 PM

I'm strictly a sports card guy (aside from some GPK) but I've got no problem with everyone displaying their Star Wars stuff - especially today. The buyback stamp seems to blend in a bit better on these than on the baseball cards. Maybe it's the silver foil.

I don’t follow the a Star Wars franchise much at all; although I have watched the three original movies and maybe 2 of the Episode ‘x’ prequels. Haven’t seen a Star Wars film in quite some time though!

I thought these were a great addition to the 40th Anniversary set which is my favorite Star Wars card set. That Imperial Troops Burn Through the Ship cards is pretty cool. Fun post.

I love Star Wars almost as much as I love sports cards. I watch the movies at least once a year... and will periodically watch The Clone Wars, Rebels, or The Freemakers. As for Star Wars cards... I recently picked up a 1977 Topps #254 Darth Vader (PSA 8) because it was cheap (a little under $7). Figured at that price, I could use it as a coaster.