Well, it seems like after 10 at night is about the only time I can manage to squeeze a post in these days!  It's been over a week since I made any progress on my buyback franken-set project so let's take a look at another batch this evening... 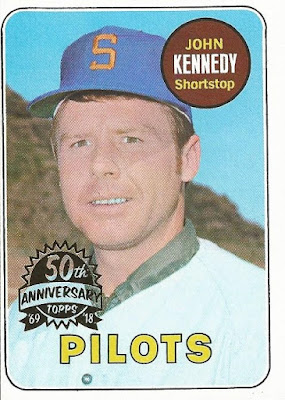 Tonight's group consists entirely of 2018 Topps Heritage 1969 buybacks, picked up as part of a small lot of these on eBay.  I don't get into many modern sets these days, but I do get excited for Heritage ever year just because of these buybacks.  This John Kennedy was a big reason I was drawn to this particular lot, being a great high-numbered Pilot (meaning you get to see the proper Pilots cap as opposed to hat-less player or airbrush job).

It turns out I didn't have a #631 buyback in the binder yet, so this one slides right into the franken-set.  Score!  I could end tonight's post right here and consider it a win. 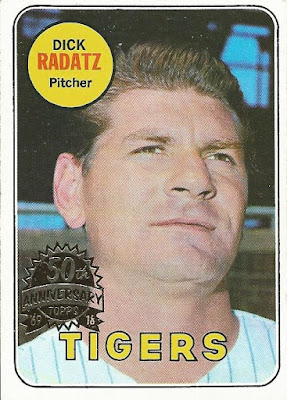 Here's a significantly less cool Dick Radatz.  This is a great example of why sets from the '60s are often so polarizing for me.  For every card I adore, and there are many of them, there's one like this.  I feel bad saying this, because Radatz had some very good seasons with the Red Sox earlier in the decade, but it won't take much to keep this card from the binder. 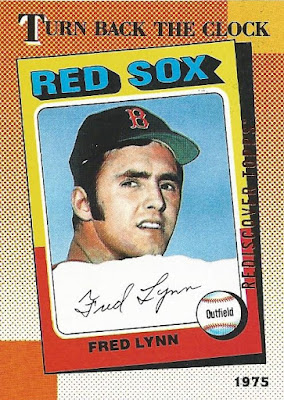 This Fred Lynn "card that never was" Turn Back the Clock buyback from 1990 Topps, which already sits in slot 663, is certainly enough to repel Radatz. 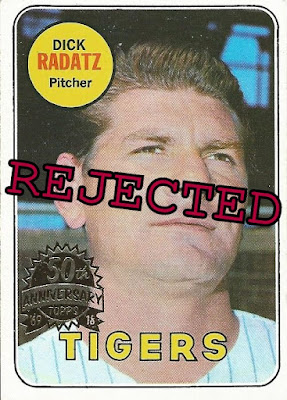 I would've loved nothing more than to have moved Fred Lynn over to the dedicated 1990 Topps buyback set I have going, but I have to maintain some integrity here.  I'll have to keep my eye out for a duplicate Lynn or another, better #663 buyback... 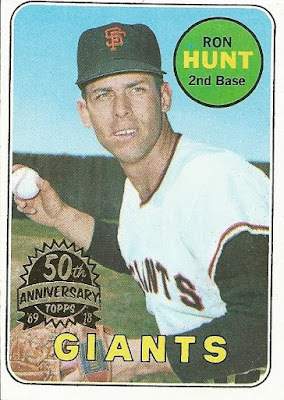 Another high-number '69 here, in fact Ron Hunt is the very next card after Dick Radatz on the '69 checklist.  At least we have a halfway interesting photo on this one, and Ron is wearing a hat as he should be.  This was a number I was missing as well, Hunt makes the cut! 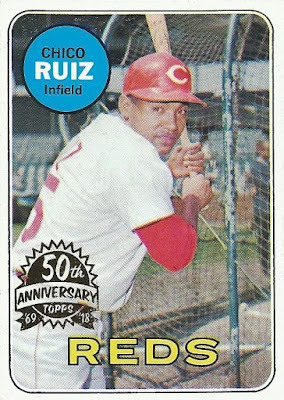 I love this one.  Chico hit just .245 in 1969, but he sure looks like he was enjoying himself nonetheless.  Look at the paint chipping on that batting cage, too!  That would never fly in a modern MLB ballpark.  Amazingly, this is another number I was missing previously for this project.  Going three-for-four like I just did is a rare feat indeed at this stage of completion. 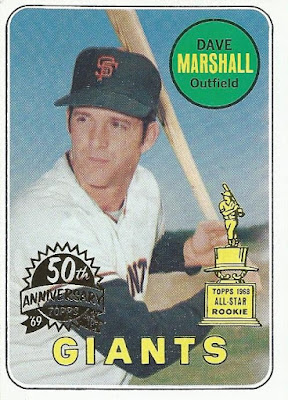 Next up, Dave Marshall of the Giants.  The star of the show here is the oversized Topps All-Star Rookie Trophy graphic.  I've mentioned this before, but I commend Topps for putting the buyback stamp opposite the trophy here.  I've seen a few examples where they stamped right over the trophy, which just seems wrong (yes I understand the irony in saying that seems wrong, when to many collectors just stamping these to begin with is borderline sacrilege). 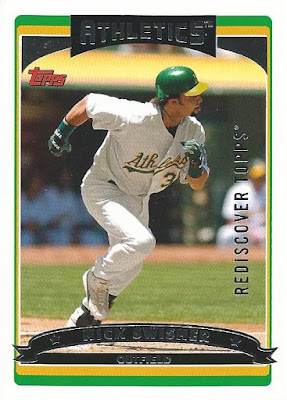 With Dave Marshall's card we break the run of new numbers, as this relatively new Nick Swisher buyback already sat in slot 464. 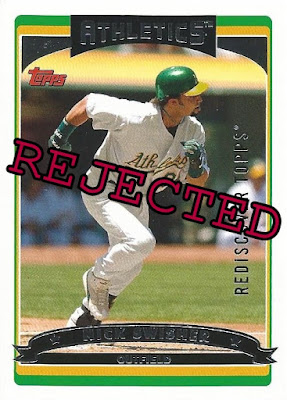 No offense to Nick Swisher, who was a better big league player than Dave Marshall, but the All-Star Rookie Trophy rules all. 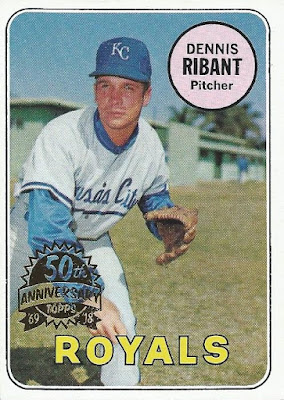 Next up, Royals hurler Dennis Ribant against one of those fantastically bizarre backdrops that were so prevalent in the '60s and '70s.  This is a cool card in that it's what Dimebox Nick would refer to as a "zero year" card, meaning Ribant never actually played for the Royals.  Kansas City acquired him from the Tigers in December of 1968.  Though he went through Spring Training with KC in 1969, where this photograph was taken, he was actually purchased by the Cardinals at the outset of the season on March 29th. 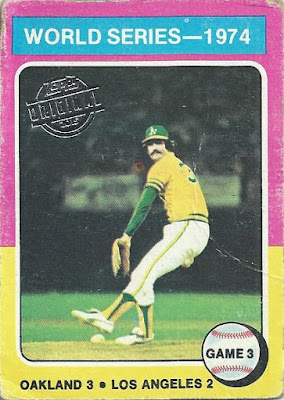 As much as I like the Ribant, it draws stiff competition as the franken-set goes.  It's pretty beat to hell, but I love this 1974 World Series subset buyback from the '75 Topps set.  Having Rollie Fingers' impressive mustache within the confines of the franken-set binder is important to me. 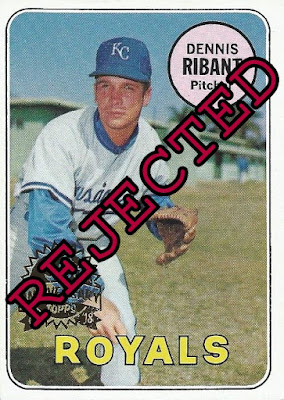 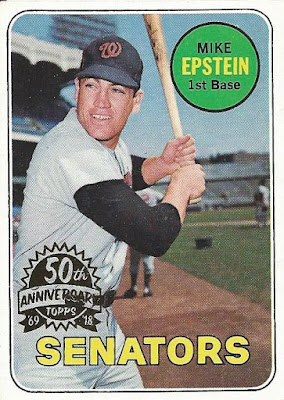 A classic pre-game warm-up shot here on first baseman Mike Epstein's card.  Mike, who was known for taking big hacks but not necessarily making contact or hitting for average, clubbed 30 round-trippers in 1969! 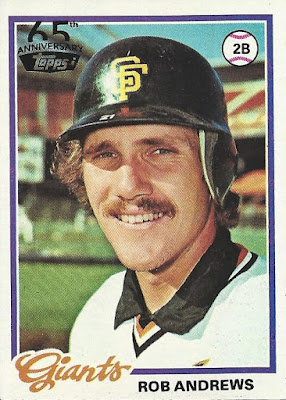 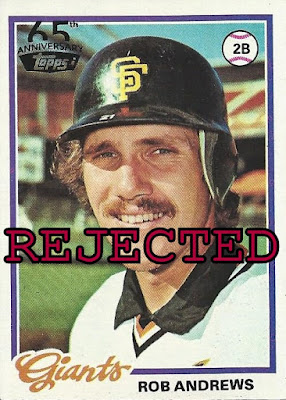 ...but Epstein certainly wins that match-up.  I mean, the guy's nickname was SuperJew!  Easy call there. 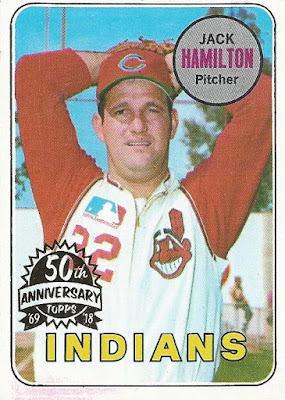 Jack Hamilton played less than a full season with the Indians, yet he's immortalized on cardboard with the team.  A good look here at the Chief Wahoo logo, something you'll be seeing a whole lot less of starting next year.  I'm curious as to what's going on behind Jack there, looks like someone leaning against a metal gate in front of a whitewashed wall.

This is my first #629 buyback, Hamilton makes the cut. 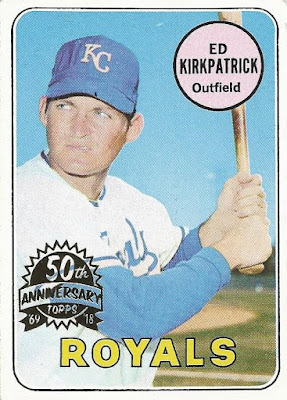 In a 16-year MLB career, Ed Kirkpatrick's five seasons with the Royals were just about the only ones where he was close to a full time player.  1969 may have been the best single season of his career, as he had only one season with better power numbers but hit almost 30 points lower that year as far as batting average.  He doesn't look too pleased here for some reason, but he should cheer up a bit given that he makes the binder by default as my first #529 buyback! 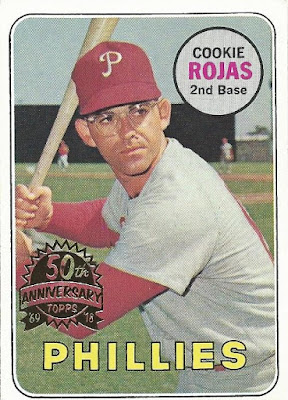 Last buyback for tonight, and maybe my favorite of the entire post.  Cookie Rojas had quite a few gems issued during his career, and his '69 issue is certainly one of them.  I was pleased to see this one included in the lot, and even more so when I realized it was yet another new number for the project!

I can't believe I went six for ten here as far as new numbers.  It may very well be the last time I get that kind of percentage in a ten-card post.  Hell, even two of the four that weren't new numbers battled their way into the binder.  Really happy I picked up this lot, the binder's a whole lot stronger now than it was before adding these.

Thanks for stopping by and reading along!

You know I love zero-year cards, but I can't argue with your choice on the Ribant. Rollie rules all.

I don't think I've ever seen a Pilots card with a proper logo, not in '69 at least. A Cookie, a rookie cup, and a Pilot (not to mention expansion-year Royals) is a very good batch.

I love that Jack Hamilton. WHat is going on with that MLB logo on the front and all??? Also, it pisses me off that Chief Wahoo is going away. I'll stop there.

On a totally related note...I paid for quite a nice buyback lot today...just wait!

Oh, and if you ever end up with any rejected Pilots, put 'em in a stack for me. I have a card-collecting friend from WA that I'd love to pass them on to.

Awwww, how can you reject Ribant - a 1st-year Royals card?