Unless you're living under a rock, you've heard the name Mookie Betts time and time again over the course of the 2018 MLB season here.  At the time of this post he's leading the league in average, runs scored, doubles, home runs, slugging percentage and OPS.  He's also within the top ten in hits, stolen bases and RBI.  Arguably the best player in the game at this stage of the season.

This has resulted in the prices of Mookie's cards absolutely skyrocketing in recent weeks.  Hell, Nick financed an entire card show from the sale of just three Topps Update RC parallels recently.

Since I'm not a "prospector" or someone who's always chasing cards of the hottest young players I don't typically benefit from this type of an uptick in card value.  In this case though, just because he has been an exciting young player for my favorite team, I was early to the party and have a pretty decent little Betts collection going.

The value of these cards is inconsequential to me at present, since I don't plan on selling any of mine.  Even still, I thought it would be fun (and make for a good blog post) to pick out a few highlights from my collection, see if I can dig up what I paid for them and when, and then take a look at what they're selling for now.  Consider it a study in "hype", I guess.  Here we go... 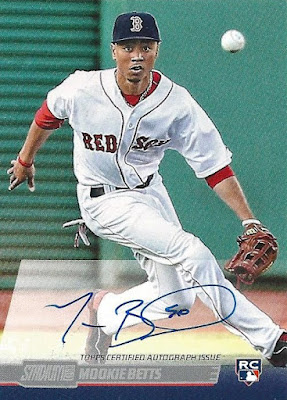 Yeah, pretty good example to lead off with here.  In recent days/weeks it's been consistently selling for a good ten times what I shelled out just over three years ago.  Even the base version of this Stadium Club RC is regularly selling in the $20 or higher range.  Nuts. 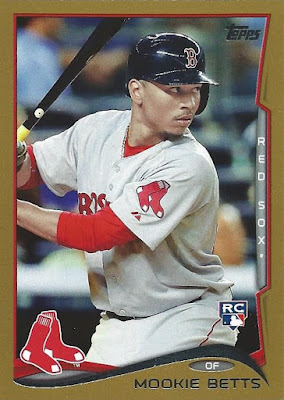 My records of my cards purchases are pretty meticulous, so I'm surprised I can't pinpoint how I came to acquire this card.  I thought it might have been sent to me in trade, but couldn't find a reference to that on my blog other than this post from early 2015 which doesn't help clarify.  Either way, I would only have paid maybe a buck or two for it at that early stage, and now it's close to a $200 card.  It's clearly not just the autographs that have taken off here.  I need to move this card to a one-touch magnetic holder ASAP. 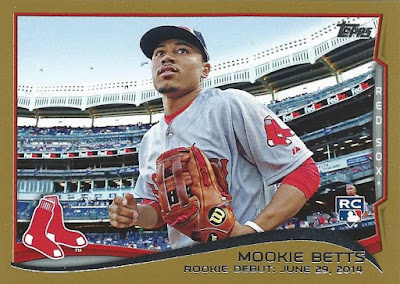 Yes, you read that correctly.  A card that I received for free in a PWE a few years back recently sold for $269.  At this stage of the post I'm already beginning to rethink what I said about not selling these, as even taking median/average values here I could likely net $500 from these first three cards alone if I struck now. 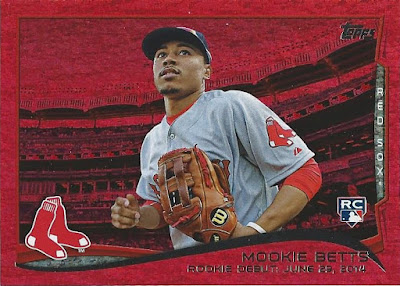 I remember having two or three copies of this card back in the day.  I think I may have sent one off to Mark Hoyle actually.  Mark, check your modern Sox box! 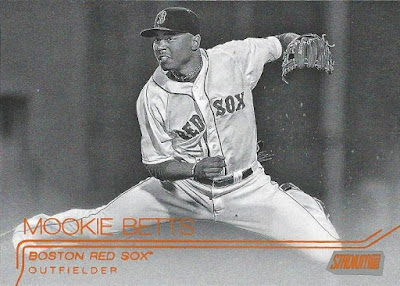 Can't find one of these to even compare prices on.  Not surprising, as these are very rare with a confirmed print run of just 17.  I can only imagine what this would go for if I listed it tonight on eBay with a "MOOKIE BETTS!!!  HOT!!! ONLY 17 EXIST!!! READ!!!" title.  Based on what I'm seeing on eBay right now I don't think a couple hundred dollars or more would be out of the realm of possibility. 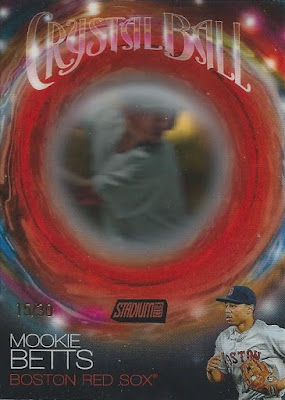 Numbered to just /30, these are pretty damn rare.  In fact, I couldn't pick up another one right now if I wanted to, even if money were no object.  Gavin has one though! 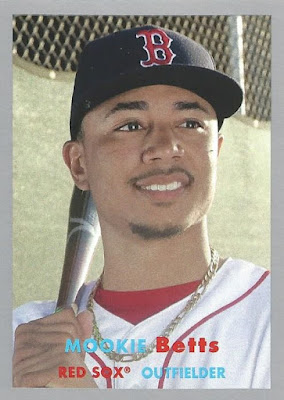 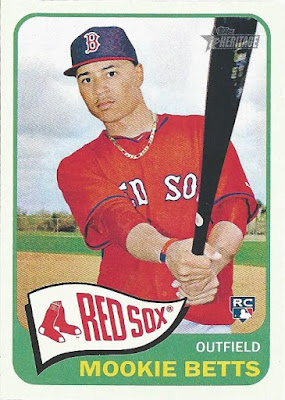 Here's another whopper.  Looks like I could get 40x to 50x my initial "investment" if I felt like parting with it.  I was really pretty shocked by the prices this one is going for.  I think anything that's an official rookie card from 2014 is just bananas right now. 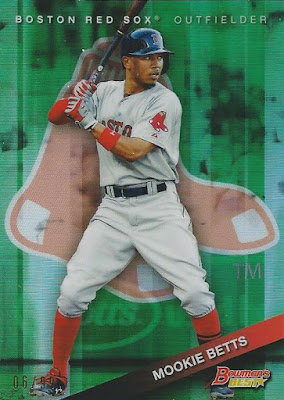 I guess this one was a good one to choose for inclusion because it proves there are no sure bets (ba-dump-bump) card-value-wise.  Looks like this one's current value is right around what I paid for it a couple of years back. 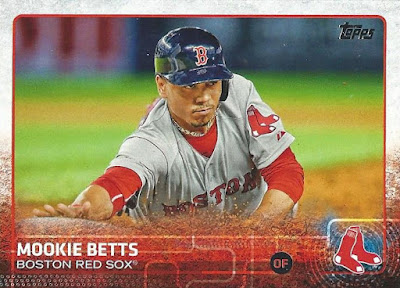 Couldn't find any examples of sold copies of this card on eBay going back 3-4 weeks.  Maybe I wasn't using the right search terms, as I don't think this one is as rare as a lot of the others I'm showing here, despite being an image variation. 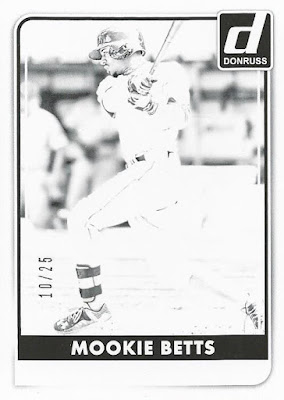 Not surprising that I couldn't locate any of these, being numbered to just /25.  Donruss cards take a hit value-wise it seems on the secondary market due to the fact that they're unlicensed.  If I had to wager a guess I'd say I'd maybe double my initial investment at least if I sold this today, but probably not much more than that. 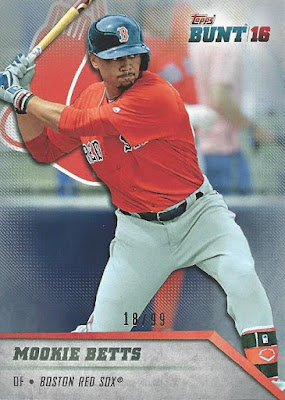 I'm not going to be able to sell this and use the proceeds for a vintage Mantle anytime soon, but $6 isn't too shabby for a card from Topps Bunt... 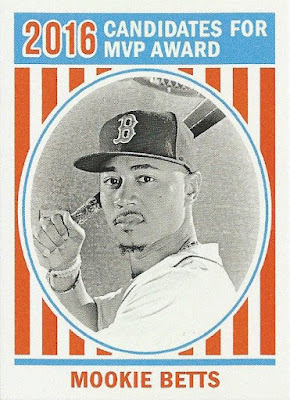 I'm guessing this one's worth what I paid for it at best.  While I couldn't find any recent completed auctions for just this card, I did find one for the entire 6-card set that went for less than $35.  Granted, Betts would be the card to have from that set, but even still... 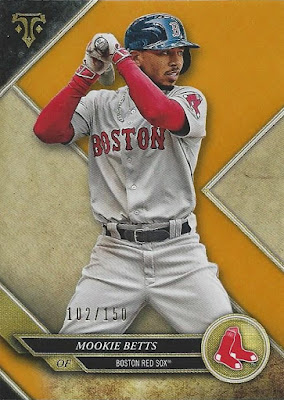 I mainly included this one to show that I was able to scoop up decent (#'d /150) Betts cards as recently as a couple of months ago for under a dollar.  You won't find many of those if you search eBay today. 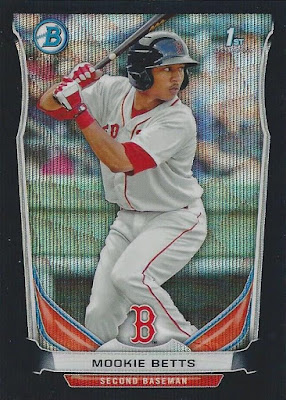 Towards the end of 2015 I picked up two Wave Refractor RCs of Mookie on COMC.  At the time they were two of the priciest single cards I'd ever purchased on the site, but it was clear even then that Betts was a special player so I justified shelling out the $8 and change for each.  This Black Wave Refractor seems to be the less popular of the two, but the recent completed auction I found still ended in a very respectable $63. 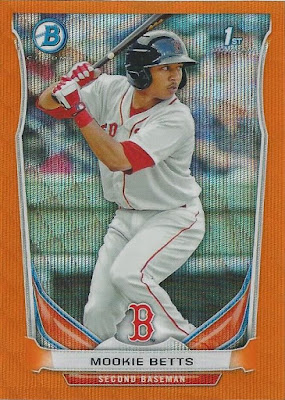 This Orange Wave Refractor, on the other hand, is regularly selling for about twice that amount, in the $125 to $130 range.  It's certainly a beautiful card, but that's a lot of money for an un-numbered, non-autographed parallel card from a set that came out four years ago.  Glad I scooped one up when I did as I'd never shell that out. 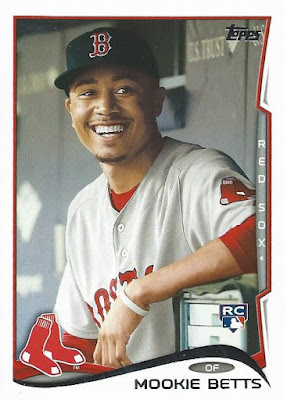 Yup, pretty crazy.  This last card is my favorite of the bunch.  I was in absolute shock when I pulled this from a repack I picked up at a Rite Aid about a mile from my house.  It is easily the single best card I've ever pulled from a repack.  In fact I haven't bought another one since I don't think, sort of went out with a bang; a repack "mic drop" if you will.

Well, that was interesting!  I'm really grateful I was able to build up a decent collection prior to 2018, because it's going to be a whole lot tougher to get steals on Mookie's cards going forward if he keeps playing like this.  Taking a very conservative number, and leaving the lower value cards out to cover fees and shipping, I think I could easily clear $1,000 if I put these all up tonight.  Insane.

Do you have any Mookie Betts cards in your collection?  Have you had any similar experiences where a card or cards you owned really took off in value after a hot start to a season?  Would love to hear about it in the comments if so!
Posted by shoeboxlegends at 11:09 PM

Somebody needs to introduce some of these ebay buyers to COMC. COMC has never been mistaken for undercharging buyers, but there are several Mookies on that site selling for less than those ebay prices.

I'm not one to pick up hot prospects either. Like you with Betts, I lucked into the Kershaw rookie hype, and I actually sold some extras last year. Then there was the Strasburg I pulled whatever year that hype was. Sold that one, too.

Awesome bunch of Mookies! Especially jealous of those wave refractors.

I still can't believe the prices his stuff is commanding. It's as close to insanity as I've seen in the hobby.

It is always fun when a young player from your team really lights it up. It is nice to know that if there is a card that you really want, you could flip some of these for a nice profit.

Sometimes it pays to be a team collector!