The Most Creative Card I've Landed in a While

I'm not sure if it's the dog days of summer, or just my mood in general, but for whatever reason I continue to gravitate towards old-time baseball as far as my collecting goes.  In particular, I'm increasingly becoming a fan of the Helmar baseball art cards.

I've picked up a small sampling this summer courtesy of their weekly eBay auctions, and have been beyond impressed so far.  Earlier this week I showed off my first pick-up from their "T206" release, and today I've got one that I think tops even that.  Behold, the Helmar "Oasis" line! 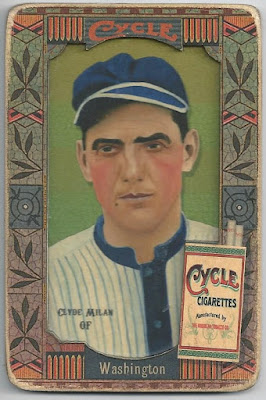 Beautiful work, huh?  I've had this card for a couple of weeks now, and I'm still so impressed by the level of care and detail that went into creating it.  First of all, as I mentioned previously, every card that Helmar produces is comprised of 100% original artwork done by the small handful of artists on staff.  Their attention to detail in creating the artwork is impeccable.  They do an amazing job evoking the feel of the era that they're shooting for, and I love the creativeness that is shown in some of the themes.

According to Helmar's website, each one of these Oasis cards is actually composed of seven different layers of material, then scuffed and worn to give it an authentic feel.  The inspiration for the design was to create something that pays homage to the "Gaslight Style" commercial trade signs of the 1870s through the 1890s.

Within the set, there are a few different faux-brands that make up the borders and backs of the cards.  In this case Clyde Milan, star outfielder for the Washington Senators, is done on the "Cycle Cigarettes" design.  In addition to the intricate border... 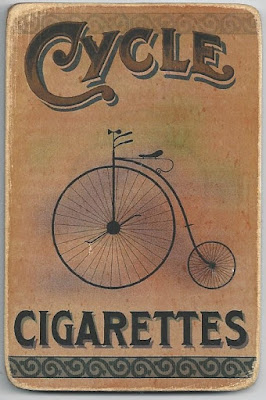 ...as with all Helmar cards being produced these days, you get some nice artwork on the back. 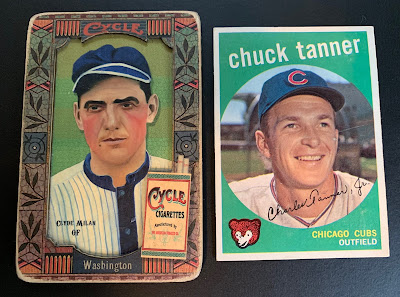 These cards measure (roughly) 2.65" x 4", as you can see here they are slightly larger than a standard-sized sports trading card.  Doesn't bother me in the least, and in fact where these are really small pieces of baseball art I actually prefer the enlarged size.  I've got some 4-pocket sheets on the way from Amazon that I think will hold these just perfectly. 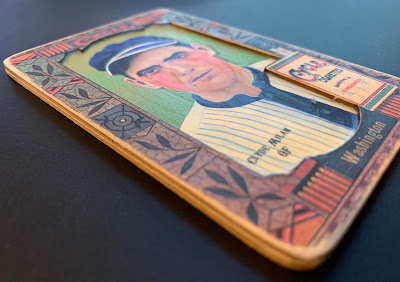 The really cool thing about these, which you can't really tell from the prior photos, is that they've got some dimension to them due to that layered approach to creating the card.  Think Gypsy Queen or Diamond Kings "framed" parallels from modern sets; the painting of the player is actually recessed within the border of the card.  You can see it a little better in this photo, especially along the cigarette pack on the right border there.  This shot gives you a better feel for how thick and sturdy these are as well.

Like the other Helmar sets that are being produced these days, you'd be surprised what some of these cards can fetch at auction.  I really like grabbing the obscure guys as much as anything though.  After all, I've got dozens of Babe Ruth cards in my collection already, but this is my very first Clyde Milan!  I can honestly say that this might be the most satisfying $10 I've spent in our hobby so far this year.

Clyde was a light-hitting speedster of a center fielder, who actually supplanted the great Ty Cobb as the American League stolen bases leader in both 1912 and 1913.  Milan received AL MVP votes for four consecutive seasons beginning in 1911.  Really pleased to have him included as a player in my baseball card collection at last.

I applaud Charles Mandel and the other folks at Helmar for putting such effort into creating beautiful custom cards like these.  I will absolutely be searching out some more of these Oasis cards for my collection in the future.

Have a great Saturday, and thanks as always for stopping by!
Posted by shoeboxlegends at 9:30 AM

Wow. The card was beautiful before you showed off the depth... but that added feature took the card to a whole new level.

Now THAT is a sexy baseball card. Congrats on the pick up.