This post is exactly what the title sounds like, a very quick run through ten potential competitors for my Buyback Franken-set project.  Let's get to it! 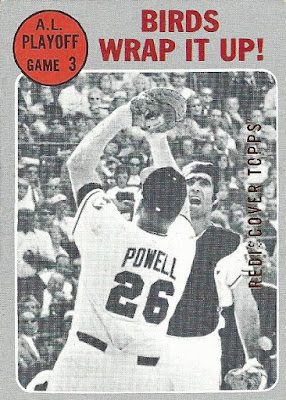 What a great buyback to lead off with, no?  I like this one so much that I shelled out $1.99 to grab it off of COMC.  This one has to make the franken-set, right? 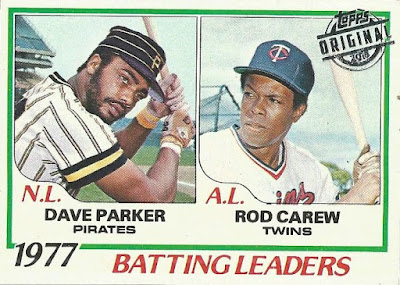 Not so fast!  How's that for some star power on this 1978 Topps '77 Batting Leaders card?  Man, what a tough decision to get the ball rolling here... 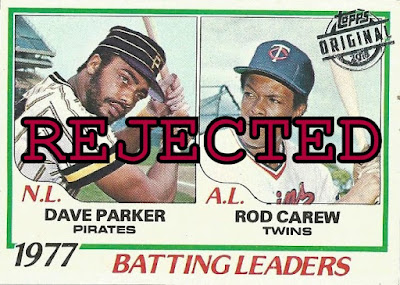 I'm going with the 1970 card, in part because horizontal cards just look better in the binder.  What a stellar addition to my rejected box this card is! 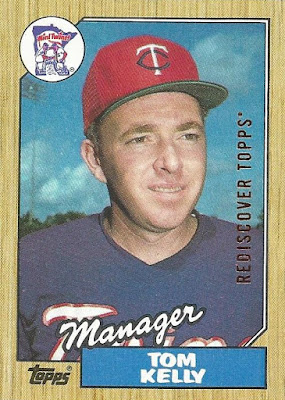 We crash back down to earth with a junk wax '87 Tom Kelly for today's second contestant. 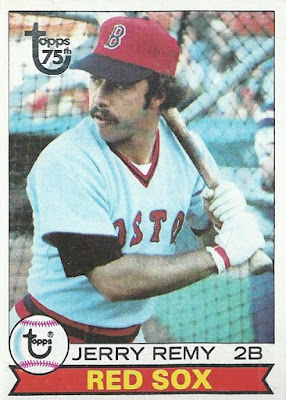 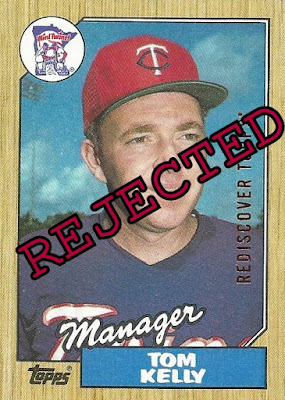 Rem-Dawg wins in a route! 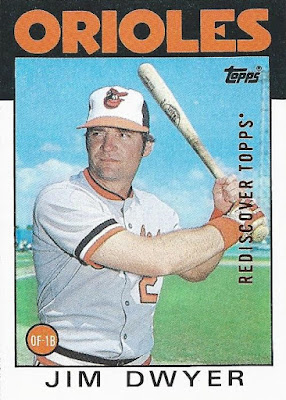 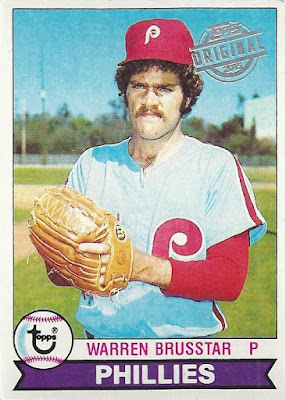 Warren Brusstar's '79 release is already in pocket 653.  Is there any reason to oust this card for the Dwyer? 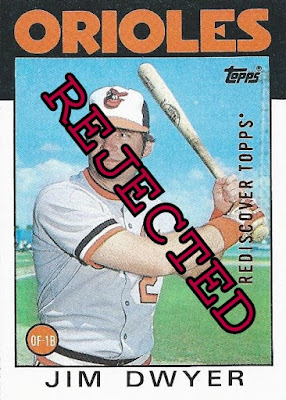 I can't think of one. 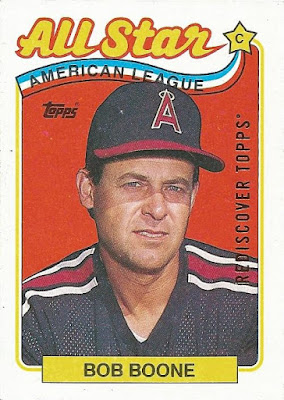 A nice bright Bob Boone from the 1989 Topps All-Star subset is next up.  I've already got a couple of '89 All-Stars on the page that this card is on, time to add another? 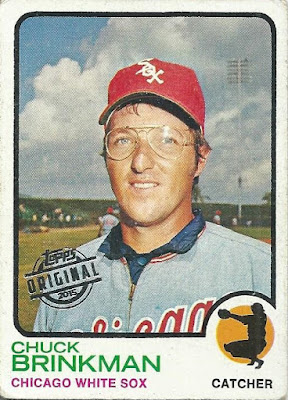 Chuck Brinkman and his wonderfully awkward glasses may have a thing or two to say about that. 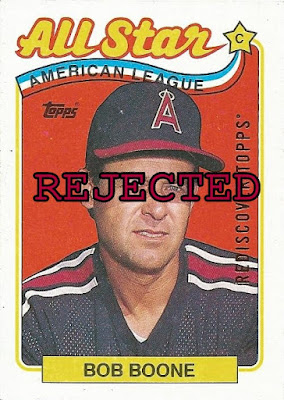 At the end of the day I went with the Brinkman based purely on the photograph. 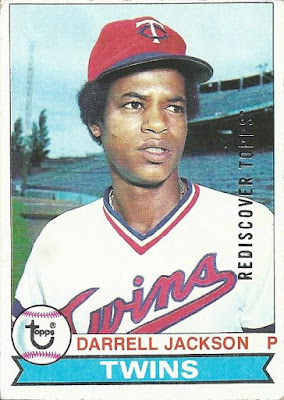 This '79 Darrell Jackson is pretty bland.  In fact, this is the 2017 "Rediscover Topps" buyback version, but I've already rejected the 2015 "Topps Original" buyback version of this very same card. 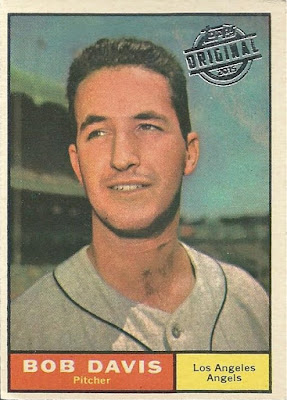 That one lost out to Bob Davis, largely because I don't have a lot of '61 Topps in the binder yet. 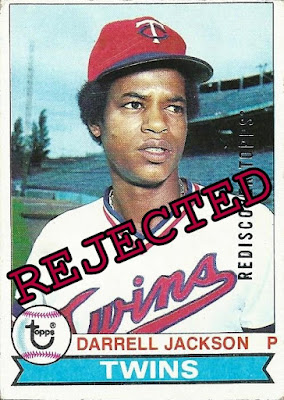 This 2017 version suffers the same fate, of course. 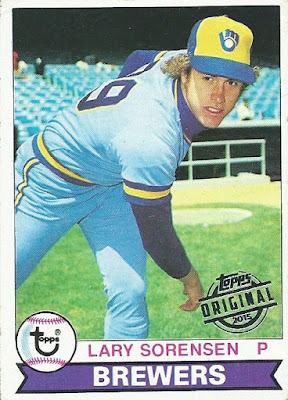 Next up, an awkwardly-cropped 1979 Lary "where's the other 'R'" Sorensen.  Not a whole lot to say about this one. 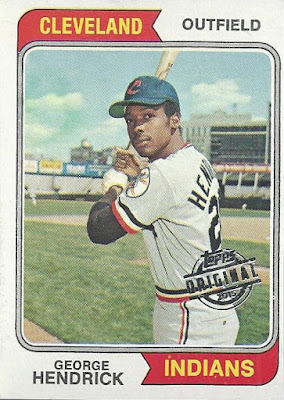 I don't see any reason for it to supplant '74 George Hendrick in slot 303. 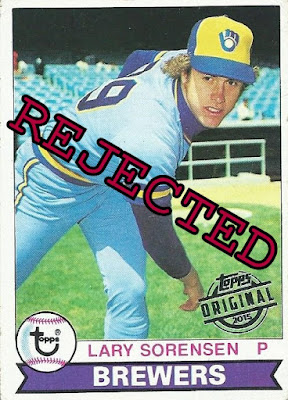 Nope, no reason at all. 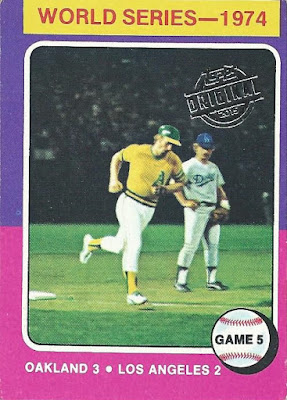 Okay, here's a cool one.  Terribly mis-cut?  You bet!  I love the old playoff highlight subsets though, this one has a lot of appeal to me.  I'd love to slide it into pocket 465, but... 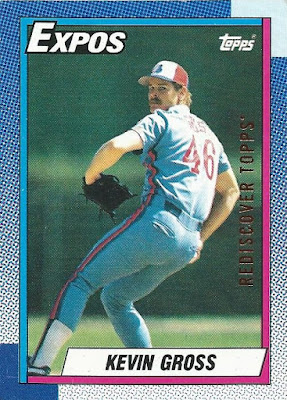 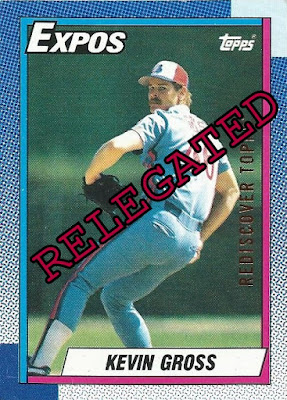 The '75 goes into the franken-set, and the Gross gets shuffled over to the binder dedicated to my insane attempt at an entire 1990 Topps set in buyback format. 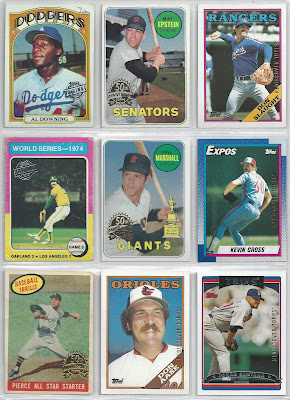 This one was part of a complete page as well, so as has become the custom, here is the page prior... 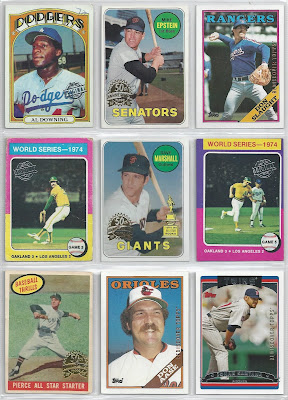 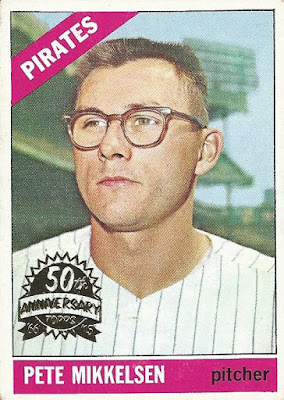 How about the glasses on this Pete Mikkelsen?  Cap-less ballplayers on my cards generally drive me nuts, but a good pair of goggles can offset that to some extent.  I love the Heritage box-topper buybacks as well. 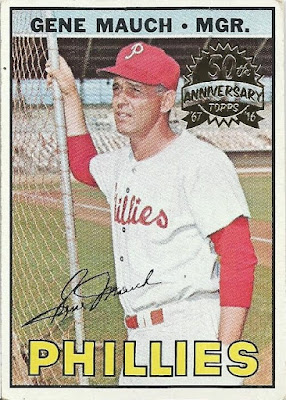 Unfortunately, I have the Heritage box-topper buyback from the very next year's set already in the binder in slot 248. 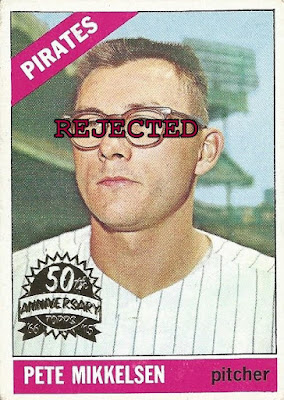 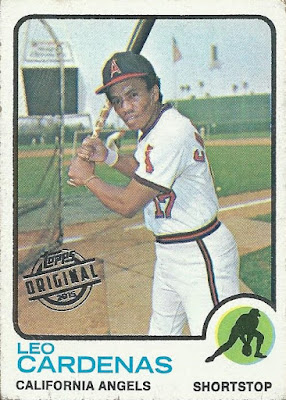 Here's a cool one, most notably all the background action.  Warm-ups, scoreboard, advertisement, batting cage, even an American flag, this one has it all. 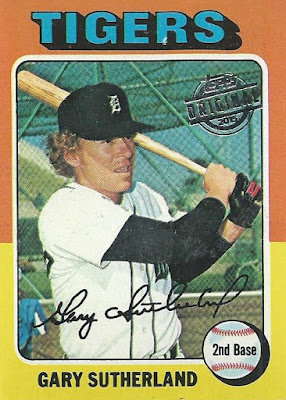 Cardenas gets matched up against another batting cage card, with this '75 Gary Sutherland. 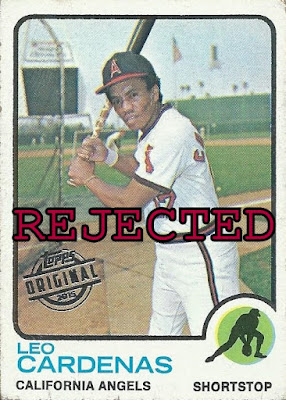 I went with the Sutherland, however this is probably the one call in today's post that I'm having second thoughts on.  Might have to revisit this one someday. 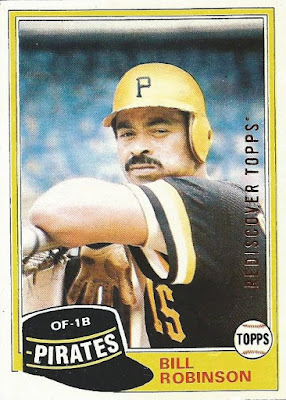 Last, but certainly not least, Bill Robinson's 1981 card represents the only new number for the franken-set out of today's batch of contestants.  He's been slid neatly into pocket 51, and represents the 652nd card in the binder now.

One new number for the project, a new card for my 1990 Topps buyback set, and a couple of cards that fought their way into the franken-set binder as well.  Not too shabby for a random lot of ten at this stage.

Until next time, thanks for stopping by!

When I was a kid back in the 1980s, I think I had a pair of glasses like Chuck Brinkman's there. The Frankenset sure has come a long way!

The Cobra and Carew get rejected! Gotta ask. If you made a top 10 Buyback Frankenset rejects... would it make your list?

Oh man, good question Fuji! I bet it would be right about on the borderline of the top 10. I may have to do such a countdown as a postmortem if the day comes when the actual franken-set gets finished!

This round had a lot of great vintage in it. A few tough choices I'm sure.

Is it weird that I can identify them, and Boog Powell and Andy Etchebarren on the 1970 one (OK, Powell is a gimme!), but good luck to me doing that with any current players!

Some tough matchups this time around, but I love the page with the two 1975 WS highlights cards in it!