COMC Blaster - Baseball and Only Baseball

We're into the dog days of August now, and as a collector of multiple sports this certainly feels like the time of year to feature baseball cards on the blog.  In that spirit, tonight's "COMC Blaster" will be comprised entirely of baseball cards that I've recently plucked from the site.  You know the drill, $19.99 in credit on the site, let's see how I did this time around... 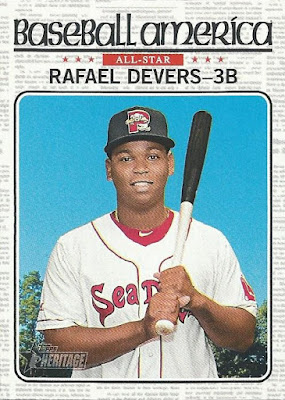 Rafael Devers has been one of the hottest hitters in the game the past couple of months or more, and I'm trying to snatch up a decent representation of his cardboard now, especially the early stuff.  If he becomes the next Mookie Betts or Mike Trout, which is a possibility, it'll be much tougher to acquire.  I happily shelled out 66 cents for this All-Star subset card from Topps Heritage Minor League featuring Devers with the AA Portland Sea Dogs. 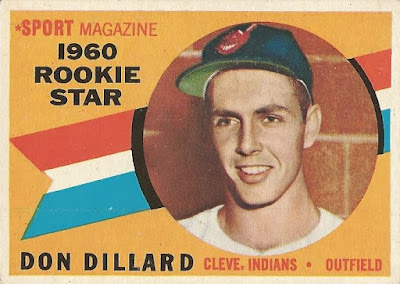 With a couple of notable exceptions (Devers and Xander Bogaerts), most of my limited hobby spending of late has gone towards vintage baseball.  I'm really trying to target the '50s with the most vigor, and '60s and '70s cards to a lesser degree.  For the most part I just get much more joy out of collecting cards from this era, so I'm always on the lookout for cheap low-hanging fruit like this Don Dillard from the 1960 set (43 cents!). 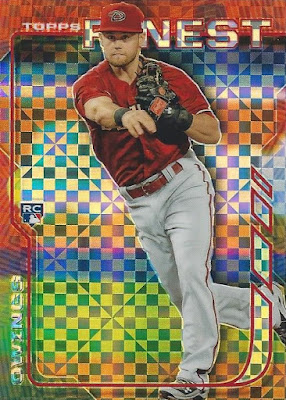 One modern age project that I haven't given up on yet is the 100-card 2014 Topps Finest set in X-Fractor format. 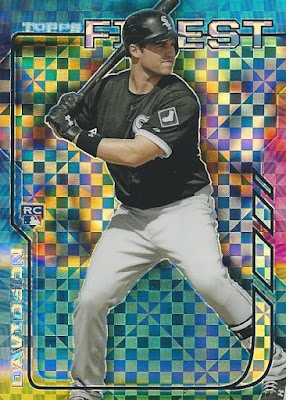 Tonight's post contains seven of these bright beauties, a not insignificant portion of the set! 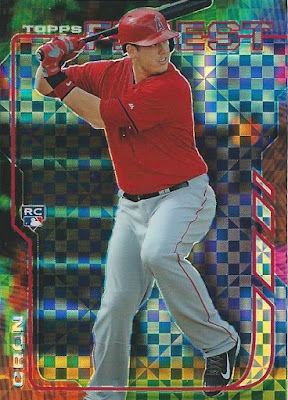 The examples in this post aren't exactly the superstars of today's game, but some of them have enjoyed respectable MLB careers nonetheless. 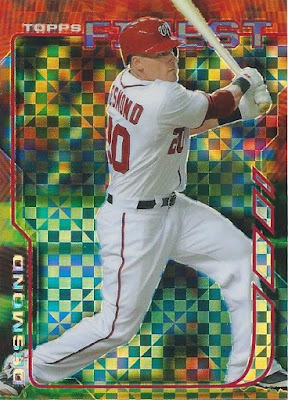 Besides, I didn't exactly break the bank on any of them, with each of these joining my collection for between 41 and 62 cents. 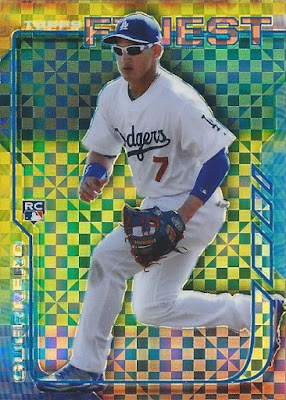 I actually do have this set in a binder, and I can't wait to see how all 100 of these look together. 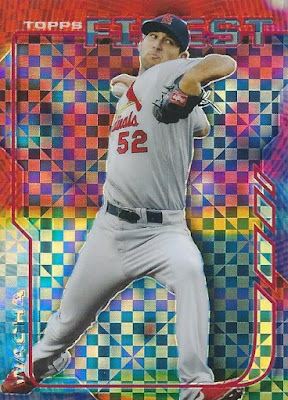 By the end of the project, I'll possibly have to wear sunglasses when opening the binder on a bright day. 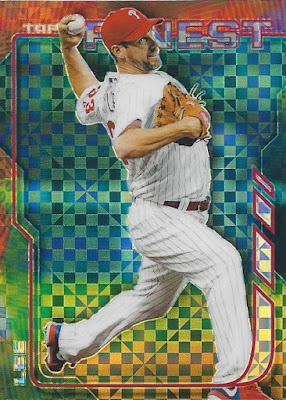 That's a wrap for these, at least for tonight's post.  I'm up to 43 of these in hand now, closing in on the halfway point in my quest! 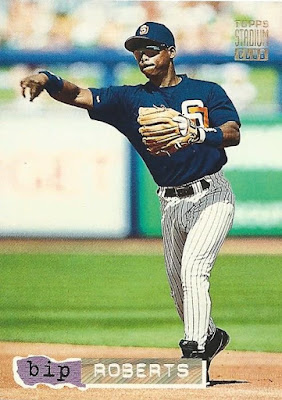 In one order a while back I grabbed a bunch of '94 cards for an upcoming Stat Kings post.  Haven't gotten around to the post yet due to lack of time, but from that order here's a Golden Rainbow parallel of Bip Roberts... 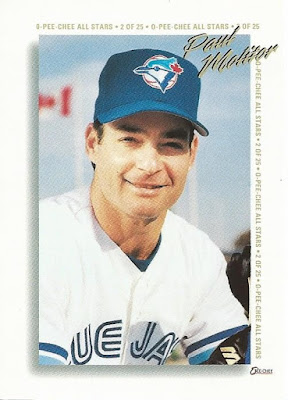 ...and an O-Pee-Chee All-Star send in thingy (official terminology) of the under-rated (if that's possible for a HOFer) Paul Molitor.  53 and 41 cents respectively for this pair. 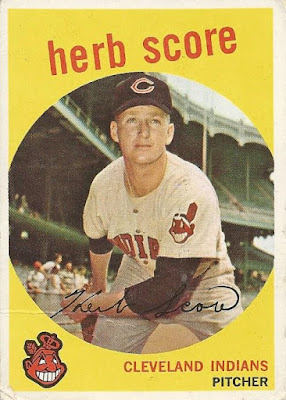 How about another card towards my quest to complete the 1959 Topps set?  A completely awesome one too, I love the crisp image of Herb Score at Yankee Stadium here.  Sure, it's got a crease or two on the bottom half, but that allowed me to secure the Rookie of the Year, 2x All-Star and member of the Cleveland Indians HOF for just 85 cents.  I'm at 305 cards and counting in this set now, and the binder is really starting to look impressive leafing through it. 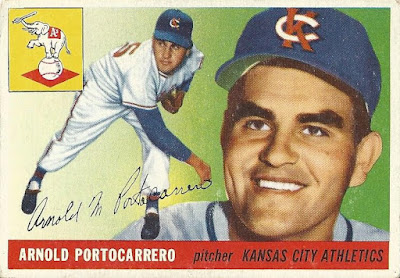 While I should be focusing primarily on 1959 Topps, what I've actually been buying most frequently in 2019 on COMC has been the oversized '55 set.  I've really grown to absolutely love this set, as well as its close cousin 1956 Topps, in recent years.  Since I already have more than enough hobby projects going I'm primarily chasing the '55s first.  I've got a greater percentage of the set, and the checklist is considerably shorter as well.

Arnie Portocarrero here was had for $1.33, right about in the price range I love paying for these in roughly good/very good/excellent shape with great overall visual appeal. 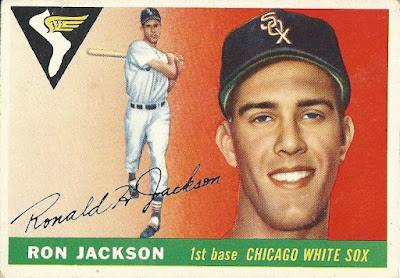 I snagged this Ron Jackson at the same time, for even less coin at $1.21.  If only all the remaining cards I need were available for this price!  I'm now up to 43 of these cards, just a hair over 20% done at this point. 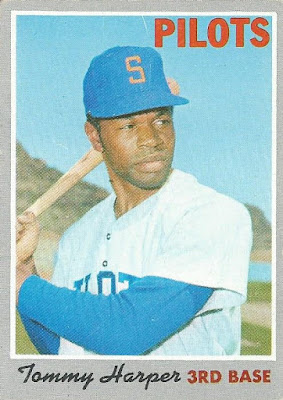 This order also contained a trio of 1970 Topps Seattle Pilots cards.  I determined a while back that it was sort of inexcusable that I didn't have completed Pilots team sets from '69 and '70, set out to acquire some, then quickly got distracted by something else. 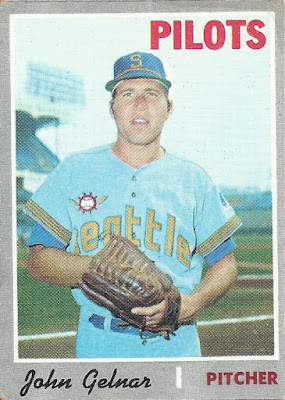 Not before I snagged the three cards in tonight's post though, my favorite of which is pitcher John Gelnar.  Absolutely the best look at the uniform among this limited grouping. 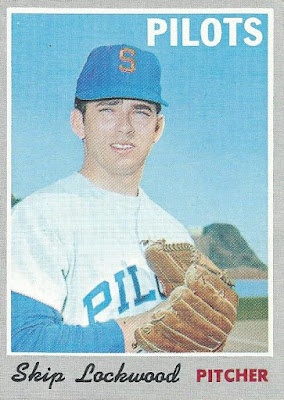 Lastly, a relatively high number in Skip Lockwood.  These three cost 43, 50, and 75 cents respectively.  Once again I find myself asking why I haven't knocked this team set completely off of my hobby to-do list already. 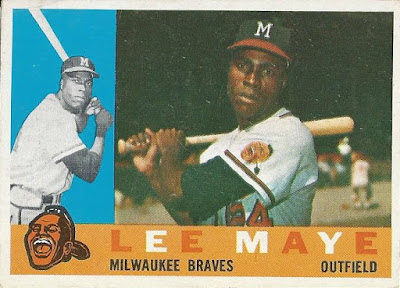 The 1960 Topps card towards the beginning of the post is joined by three brethren here, each acquired simply because they were cheap.  52 cents for Lee Maye... 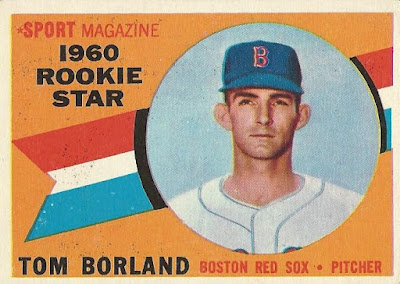 ...58 cents for Tom Borland, which felt particularly good given that it's a new Red Sox card as well... 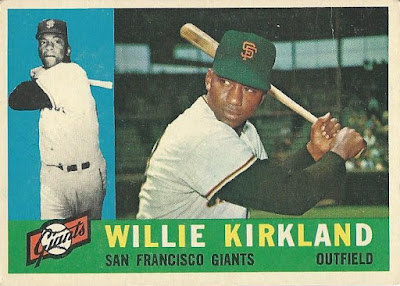 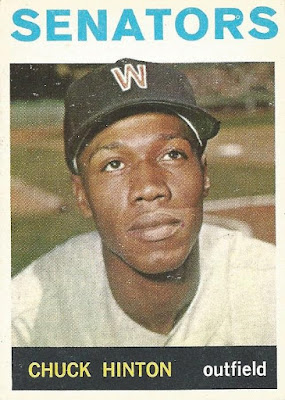 Same frugal approach led me to picking up this Chuck Hinton.  I scored some of the bigger names from this set last winter in Mantle, Koufax and Pete Rose.  This is a nice cheap companion to those cards at just 52 cents. 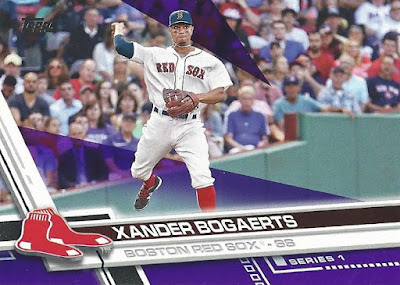 Here's one that's from the current century!  I'm a sucker for a good Xander Bogaerts parallel, and just couldn't resist this Purple parallel of his 2017 Topps flagship card at 66 cents.  142 cards of my favorite player and counting now... 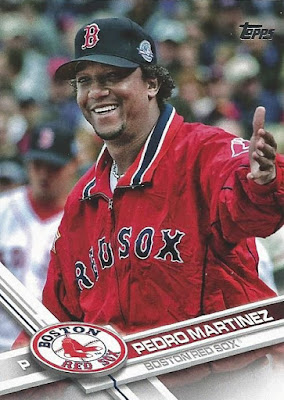 While they don't quite have the same cache as the 2011 version, I do enjoy a good retired legend variation even today.  At 50 cents, this Pedro Martinez from 2017 Topps Update is a great addition to my team collection.  Still the most dominating pitcher I've seen in a Red Sox uniform with my own two eyes. 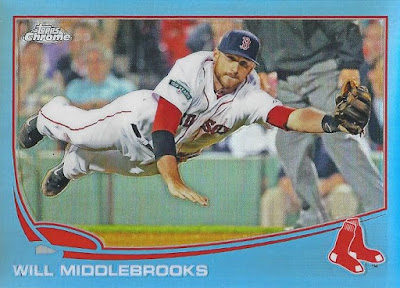 I've completed the 9-card 2013 Topps Chrome Red Sox team set in Orange Refractor, Purple Refractor and X-Fractor format.  Might as well start in on the Blue Refractors (#'d /199).  Will Middlebrooks got one of the best cards in the set too with this great horizontal dive.  Nowadays I wouldn't spend the $1.50 that I forked over for this copy, but it's still a cool enough card. 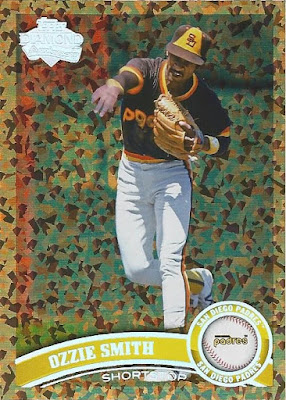 See, the 2011 legends variations are just much nicer, even more so in Cognac!  An especially perfect parallel for these Padres uniforms.  I got a steal on this one at 75 cents, I'd say. 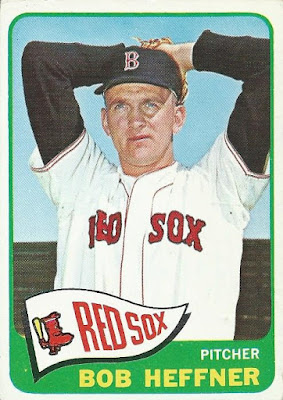 1965 Topps, though a beautiful set, isn't really high on my list of collecting priorities.  Filling in gaps in my '60s Red Sox team sets certainly is though!  I knocked out a few '65s in my most recent order, including Bob Heffner here for a very reasonable two quarters.  The Trading Card Database shows me that this is my first card of Heffner, which is kind of cool. 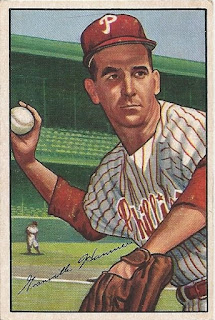 Last, but certainly not least, my single favorite card in tonight's "blaster".  I absolutely adore the early Bowman releases, in particular the 1950 through 1952 run.  This '52 Granny Hamner is a great example of how each card is truly a miniature work of art.  Every so often I scoop up a cheap card or two from this set, though it's a rarity to find these in good condition for less than $3 or so.  Hamner was acquired for $2.50. 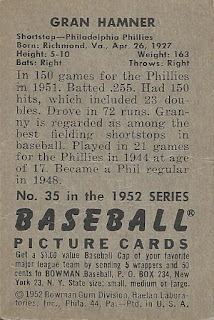 Granny was the NL starter at shortstop in the 1952 All-Star game, the first of three consecutive All-Star selections for the Virginia native.

The running total for all the cards in this post stands at $19.68.  I'm sure I could scrounge around for a cheapie in my "COMC cards to be processed" box, but instead we'll call it there.  This Bowman really put the lot over the top, but even absent this card I'd still take the others over a retail blaster.

You know it's a good post when you give other collectors ideas for projects. I was looking at that first-year KC Athletics card of Arnie Portocarrera, thinking about how the whole team was shown in really nice-looking caps that never actually got worn... and the thought crossed my mind: Maybe I should go for a 1955 KC A's team set. "Hmmmm", he said as he stroked his chin...

Love that Granny Hamner, too. I need more early Bowman.

Solid blaster there! I'm pretty sure I saw that Ozzie Smith quite a few times during my COMC searches, waiting for someone to come to their senses and buy it for that insanely low price (I already had a copy). Glad to see you jumped on it!

I'm on the same page as you with Devers. I've been digging through boxes, pulling out rookie cards, and putting them into sleeves just in case he becomes a perennial all-star. This haul was very impressive. So much vintage. And that Ozzie Smith cognac variation is a sweet find!