The title says it all!  I was recently the recipient of yet another very generous batch of cards from my longtime hobby buddy Nick from Dime Boxes.  Let's dive right in! 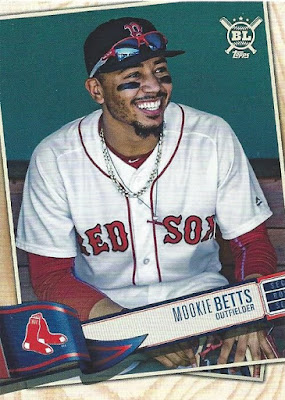 The sad reality these days is that modern card manufacturers don't really receive any money from me.  Quite literally about 99% of my hobby spending is on the secondary market, typically eBay or COMC.  I prefer it this way because I like targeting just the cards I want, and aside from Stadium Club there aren't a whole lot of sets I care to collect outright anyway.

One downside of this approach though is that I don't typically get my hands on the latest and greatest Red Sox cards to hit the market.  Nick has done so much to fill that void in recent years though, and I greatly appreciate it!  For example, this Mookie Betts card represents my very first in-hand look at 2019 Topps Big League. 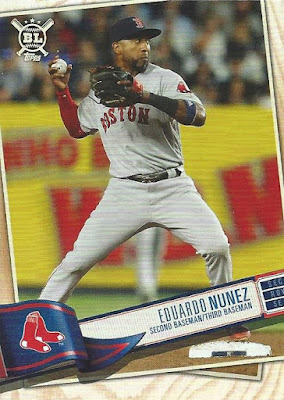 Nick included a handful of BoSox from this set in his latest package, and I have to say that I like what Topps did here having finally held a few of these for myself. 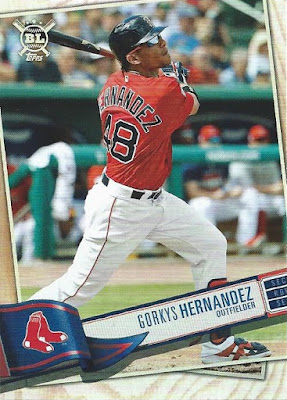 Fitting that this one came from Nick, as Gorkys Hernandez, signed by Boston in December, has yet to appear for the Red Sox this season.  This could very well end up being a "zero year" card. 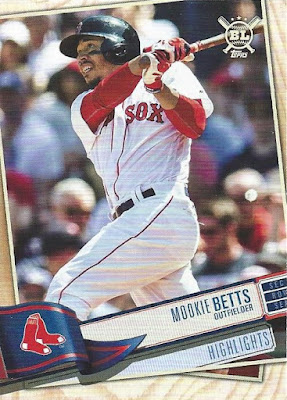 There are a crazy number of Mookie Betts cards on the checklist, I think like half a dozen or more if you count the shared League Leader cards. 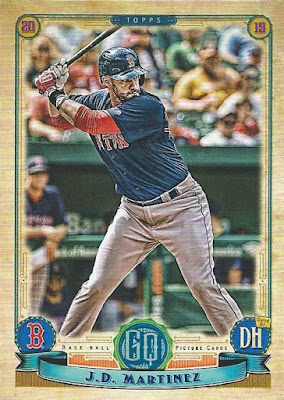 Big League wasn't the only new set that Nick introduced me to with this delivery, as I scored my first pair of 2019 Gypsy Queen cards.  I went a little nuts with the inaugural Gypsy Queen set back in 2011, but never really finished it off and will probably end up selling what I do have in my ongoing card purge at some point here.  I do still continue to chase the Red Sox from each year's release though. 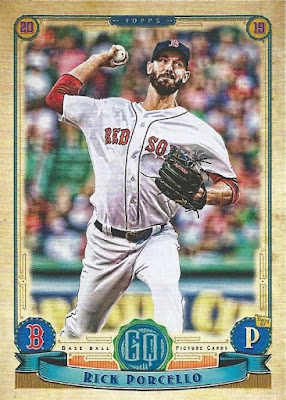 I have to say that I like what Topps did this year, quite a bit more colorful than some of the previous releases in this line. 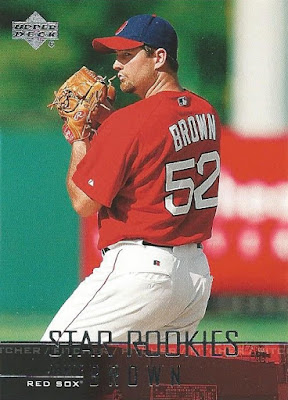 The package wasn't all 2019 cardboard, as Nick included quite a smattering of other stuff like this '04 Upper Deck.  Before we get to most of that though, there were a few more 2019 examples to be found... 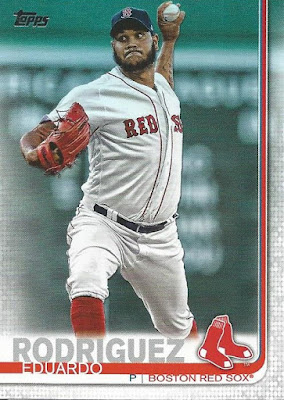 As a baseball card collector, there are few things more satisfying than completing your Topps flagship team set each year.  Nick gave me a solid boost on my 2019 effort with a quartet of Sox I was missing. 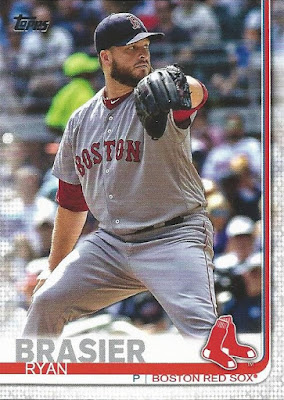 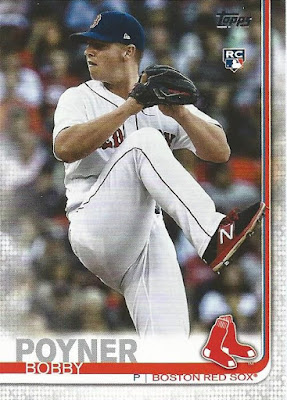 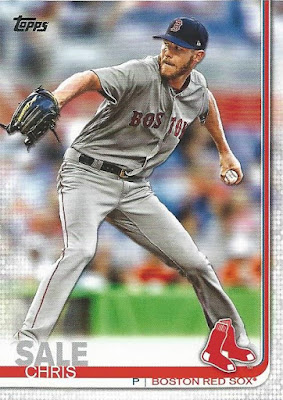 All four happened to be pitchers, two of them being somewhat obscure bullpen arms. I also got this JD Martinez All-Star insert, modeled after 1984 Topps.  This will make you feel old; JD wasn't even born yet in 1984! 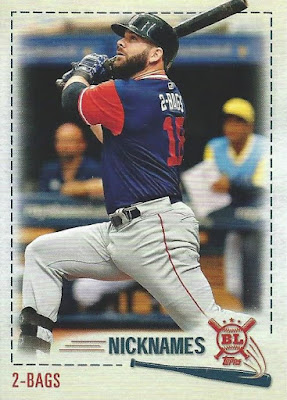 One last Big League card here, a Player's Weekend Nicknames insert of Mitch "2-Bags" Moreland.  I have to be honest and say that I like the base cards better than this particular insert set. 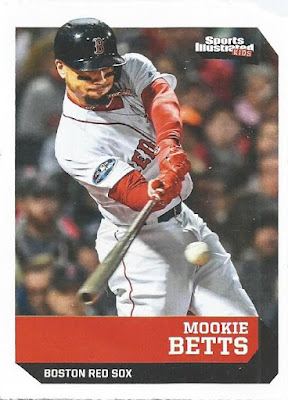 Those who have been fortunate enough to trade with Nick know that he truly excels when it comes to obscure/oddball type issues.  For example, this time around I received this Sports Illustrated for Kids Mookie Betts card! 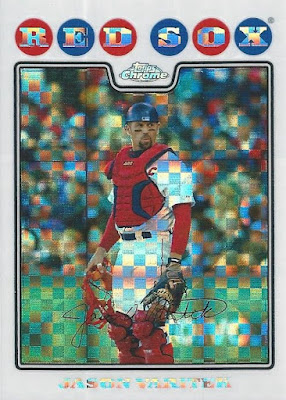 Like me, Nick appreciates a nice shiny piece of cardboard.  Given that, I'm very grateful that he was willing to part with this awesome 2008 Topps Chrome X-Fractor of longtime captain Jason Varitek. 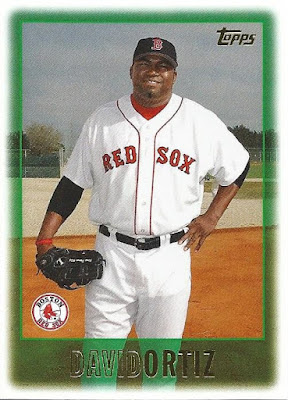 Here's another cool one, a Wal-Mart exclusive insert from a mid-2000s Topps set.  As a Red Sox collector, you end up with a ton of Ortiz cards, but I enjoy this one more than many others. 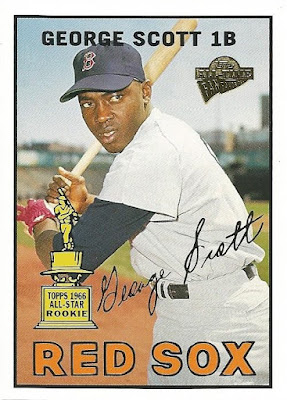 Here's a Fan Favorite George Scott done in the style of 1967 Topps, featuring the great All-Star Rookie trophy logo.  I don't think you can do a faux-'60s card much better than this! 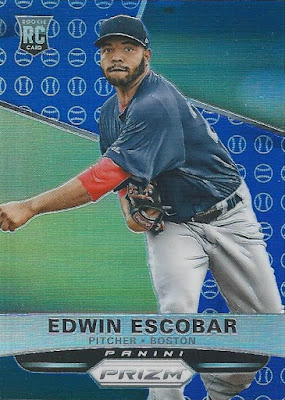 I wasn't sure at first what to call this parallel from 2015 Panini Prizm.  Turns out I was over thinking it, as it's known simply as a Blue Baseball parallel.  Pretty logical. 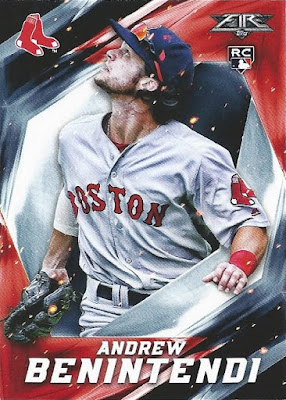 Topps Fire Benintendi RC!  I can totally see how these cards would be considered ugly by some collectors, but personally I love the over-the-top loud, colorful design.  Reminds me of the '90s, in a good way. 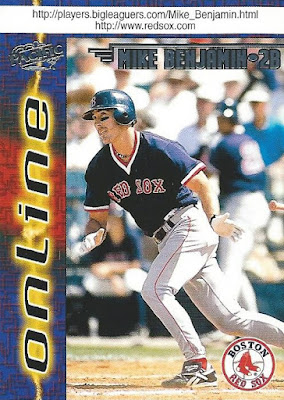 Speaking of the '90s, remember Pacific Online?  I'm up to a handful of these now in working towards a team set.  It's hard to think of a release that was more a sign of its time than this one. 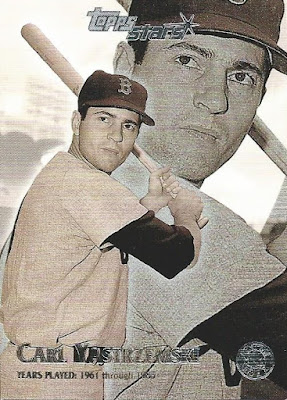 From the 2000 Topps Stars release, here's a very classy-looking Yaz.  I like the sepia tones, but if I could offer just one critique it would have been nice to use two different photographs. 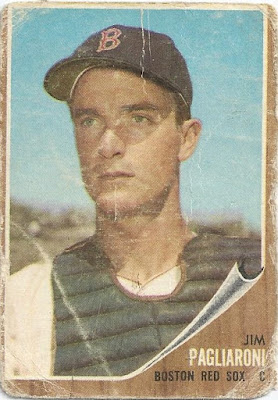 I've been working diligently at back-filling my '50s and '60s Red Sox team sets, and Nick hit me with a trio of cards towards that end here.  First up, a very well-loved 1962 Topps Jim Pagliaroni.  This is one I'd probably look to upgrade someday, but I'm so far off on knocking out the team sets that day will be a ways into the future. 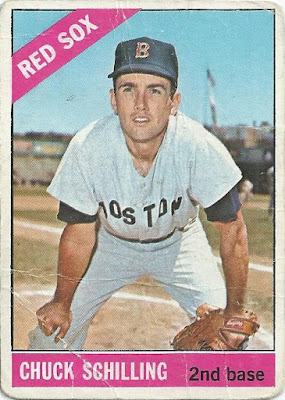 I spot an American flag in the background on this '66 Chuck Schilling.  I'm very happy to receive this card, as I owned a copy in Topps Heritage buyback box-topper format, but not an un-stamped original like this beauty until now! 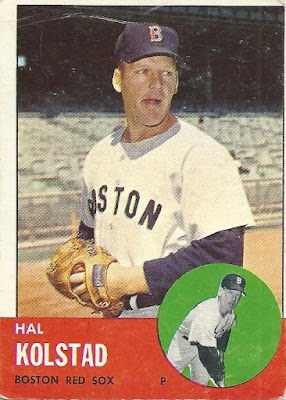 Finally, my personal favorite card in today's post, a '63 Hal Kolstad.  He may not have been an All-Star, and in fact his MLB career lasted just two seasons, but this is a great card to receive... 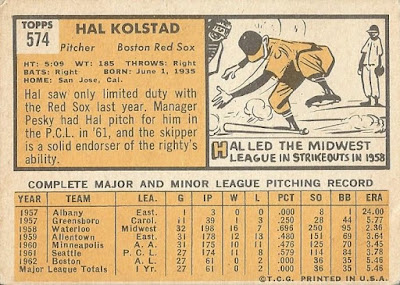 ...because it's a rare high-number!  At #574, the highest numbered Red Sox card in the set as a matter of fact.  This was a truly awesome surprise, and quite literally had me grinning ear to ear when I came across it in the stack.

That's a wrap for now, but in case all this great cardboard weren't enough, this actually represents only about half of the "new-to-me" Red Sox in Nick's package.  I'll be back with the other half soon!
Posted by shoeboxlegends at 7:00 PM

I don't spend much cash on current year product, either, and as a result I had no idea some of those Sox had 2019 cards. The Varitek and Ortiz cards are nice, but a '63 high number is definitely special.

Pacific Online. Now that's a blast from the past.

Another great Dime Box shipment! I looked at the first Big League Mookie card, said "Uh-oh", went and removed the same card from the stack I'm getting ready for you, and I kept the stack nearby as I read your post. Fortunately that's the only one I had to remove. :-)

Glad you enjoyed everything! I had absolutely no idea that '63 was a high-number -- I think it came from the box of vintage my dad found at an antique store a while back. Happy to hear it found a good home!