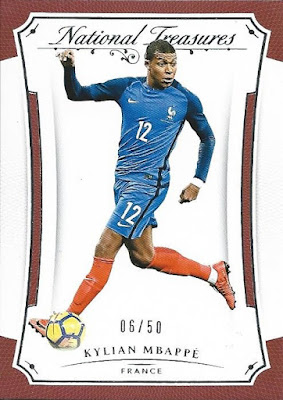 This is going to start off as a soccer card post, but quickly transition to something much different, so even if you are bored to death by soccer stick with me for a moment here and I promise you the payoff will be worth it!

I became a fan of international soccer around the time I first traveled to Europe almost ten years ago now.  For the first few years of my fandom, there weren't really a ton of soccer cards available out there, but the soccer card scene has really exploded in the past half dozen years or so.  Well two summers ago now, the 2018 World Cup was in full swing.  I, like millions of people around the world, became fascinated by young French superstar Kylian Mbappe.  At just 19 years old he was one of the biggest stars on the world stage in the tournament, and led France to Gold in the tournament.

I was searching out Kylian's cards somewhat regularly that summer, mostly trying to obtain different parallels for the 2018 Panini Prizm World Cup set that I was borderline obsessive over for a while.  During one of those searches the above card turned up.  I knew right away that this was somewhat rare, as I hadn't seen more than a copy or two available in my weeks of searching daily for new Mbappe cards.

The card had only been listed within a few minutes of my stumbling upon it, but I snatched it up without hesitation given that the seller had listed it with a Buy-It-Now Price of just $4.99.  Since National Treasures is a super high-end set (the type that comes just a handful of cards per box, and comes in a wooden box at that) I knew this card was a bargain the moment I saw it, and that it would form a nice centerpiece to my small Mbappe collection.

I don't think the seller really knew what he had here.  I believe this was someone who opened a case, kept all of the "hits" and then listed the "lowly" base cards blindly at $5 each just to flush out inventory and re-coup some money.  The thing is, in a set like this even the base cards can be highly desired.  In the weeks following my purchase, I saw other copies of this exact same card sell anywhere from $150...

...to upwards of $250.  Truth be told, I'm not even that big a fan of the way the card looks, but I held onto it and figured it would make for a great blog post at some point on how I picked up a hot card for approximately 1/50th of its market value at the time.  I put this puppy in an Ultra Pro One Touch magnetic holder, filed it away in my soccer box, and largely forgot about it.

Then, in the past few months, something happened...

I don't know if it's a result of the Michael Jordan documentary, the coronavirus pandemic giving people more time to focus on cards and hobbies while stuck at home, or something completely unrelated, but Mbappe cards started to really spike in value.

It's hard to overstate just how much Kylian's cards have skyrocketed just these past few weeks.  This is every bit the situation you're seeing with Michael Jordan cards on the basketball side, where singles that cost less than $20 only recently are now selling for hundreds.

Because I have been trying to trim my collection of cards that I'm not truly enamored with, and have been putting an intense focus on obtaining fewer but more significant "dream cards" instead, I decided to see what this card was going for.  Quickly realizing it had more than doubled maybe tripled or more in value all over again, I decided it was time to part with this card in favor of a few cards I'd appreciate much, much more.

I listed this on eBay with an insanely high Buy-It-Now price and accepted offers, and within minutes they started rolling in.  In the end I sold this $4.99 pick-up that wasn't all that significant to me for a price I was satisfied with, more than I've ever made selling one single card in the past I believe.

Let's just say it was enough to afford this for starters... 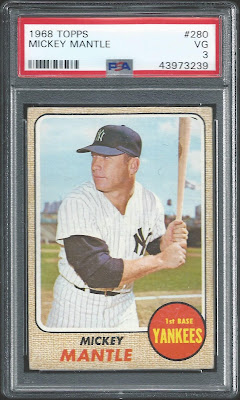 Simply stunning.  For some reason the notion was always in my head that vintage Mantle cards were unreachable for me, so I never bothered making them a priority until recently.  In the last year or two though I landed my first one, and quickly found that if I was patient and did my research they could be attainable in special situations where I found myself with more hobby funds than usual.

Since the sale of the Mbappe card was one such situation, I knew I wanted to add another vintage Mantle to my collection first and foremost with the proceeds.  I settled on this '68 because I think it's one of my favorite cards in a set that isn't necessarily a favorite set.  A great, stoic pose from the Mick in his final season.  Also, it checked all the boxes for me in terms of being a really amazing copy in terms of visual appeal.  The above image is a scan, but here's a photo I took with my iPhone that give you probably a better look... 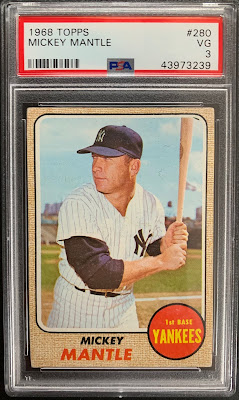 This card is bright and vibrant, crease-free, well-centered and just presents fantastically.  I chose this one deliberately over several others that were a higher grade but just as affordable, since I'm the rare breed who likes graded cards, but more for authenticity than the number on the slab.  I'll take this "3" over those other examples that were off-center, or had bubbling on the surface, or worse. 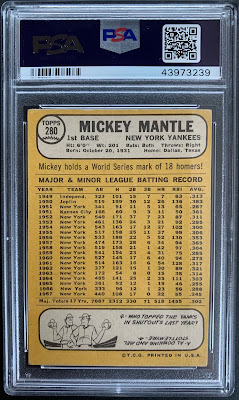 Here's a look at the back.  Again, nice and clean.  This is an absolute will-never-need-to-upgrade stunner for me, that I will have in my collection for the rest of my life barring a crisis.  It's the exact type of significant card that I wanted to turn the Mbappe into.  On the off-chance that Kylian Mbappe becomes the greatest soccer player in history and I end up regretting selling my National Treasures card off, I at least wanted the proceeds to add some really significant cards in their own rite rather than tons and tons of commons or cheaper cards that I may not appreciate as much years from now.

I would honestly have been happy flipping the Mbappe RC for the Mantle alone.  Hell, two years ago after I purchased it I probably would have done exactly that had I thought more about it.  Turns out this was just the first of a few cards I was able to land though, thanks to this crazy market...

For the second one, we'll take a brief foray into the world of hockey cards... 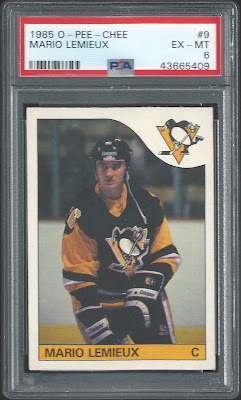 Jaw dropper!  This is the only hockey card I landed with the funds, but I sure picked a good one.  Super Mario's Topps rookie card has been a centerpiece of my hockey card collection for many years, and I'm excited to finally pair it with its O-Pee-Chee counterpart at last.

Lemieux was the greatest player in the game for many years, a true generational talent.  I still say, as far as hockey cards go, that his rookie card is under-valued in the hobby to this day.  Sidney Crosby and Alex Ovechkin RCs (don't get me wrong, those guys are generational talents also) are selling for almost twice what Lemieux's are, at least in high grades.  I simply don't get it. 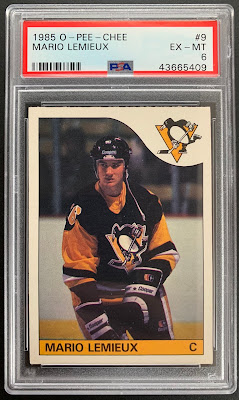 Again, here's a different look via pic instead of scan.  I made enough off of the Mbappe that I could have grabbed this card in a higher grade than a 6, but again I only care about authenticity really.  This one looks beautiful to me, and left me with plenty of funds for the Mantle and the next card we'll look at.  Just like the Mantle, good vibrant color and great centering, no obvious flaws that detract from its appeal. 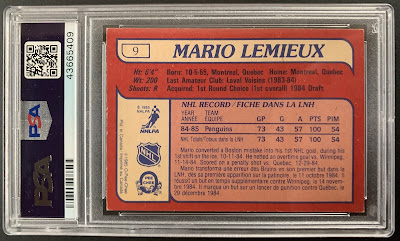 I maintain that this is arguably the greatest hockey card of the 1980s, so I couldn't think of a better hole to plug in my collection with my small windfall than this.  As with each of the cards in this post, I would happily have traded the Mbappe card straight up for just this card at any point in the past couple of years.

As if those two pick-ups weren't enough though, I had enough left over to land a third significant card of a HOFer as well! 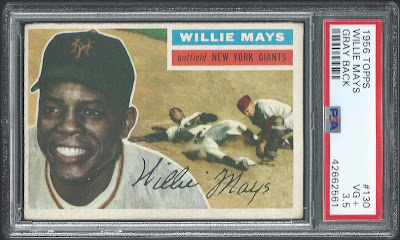 Bam!  In the last few years I've made real progress picking up vintage cards of some of my favorite HOFers like Hank Aaron, Mickey Mantle, and Roberto Clemente, but for whatever reason I haven't grabbed many Willie Mays cards.

I enjoy Mays' cardboard just as much as any of those aforementioned stars, and decided this was the time to do something about getting him at least slightly better represented in my collection.  I knew I wanted to target a 1950s card since that was the decade I'd pledged to make progress on in 2020, and while I wasn't particularly concerned with which card I ended up with, in the end it was this gorgeous '56. 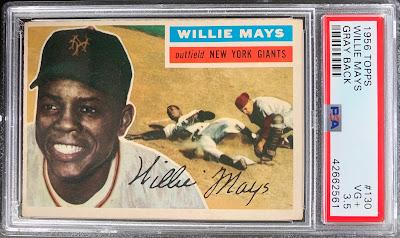 I'd love to complete a '56 set someday, and it's fitting that after being somewhat neglected as far as my purchases go over the years Willie becomes the most significant card I have to date from this release (have the Ernie Banks also, but this is a better card).

A little off-center from left to right, but the further back in time I go the less picky I can afford to be about those types of things.  Besides, the card's other aspects outweigh that in my opinion.  Just a really solid example of this classic card from a classic set.  My oldest Mays, and I couldn't be more pleased with it. 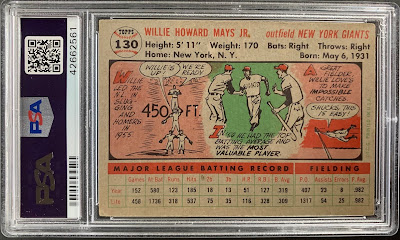 So, that's the story of how good timing two years ago combined with $4.99 and 24 months of waiting, resulted in three absolute stunner HOF cards for my "Cardboard Keepers" collections.

Yep, it's true.  Come on by again tomorrow for the conclusion to the two-post breakdown of my best card flip ever!

Awesome job of flipping. I wish I had it in me to sell cards. I've purchased a lot of cool stuff from the flea market that I should have flipped for a profit, but never did. My buddy always teases me about that, because he's like you. He's able to make a living flipping stuff he finds at flea markets, card shows, and on eBay. It's crazy.

Holy crap. Just flipping to one of those would've been amazing and things just kept getting better.

I know absolutely nothing about soccer, which makes it all the more incredible that you were able to get a Mantle AND a Mays with money from a card of a guy I've never even heard of. Congrats!

I've sold cards like that on COMC for a healthy profit, but nothing like that. Congratulations, those are three beauties!

I would have commented earlier, but seeing the cards you received from the flip made me fall off my chair. Then I had to get up and walk around for a while. And then I had to read the post again to make sure I was understanding it correctly. Congratulations on picking up some incredible cardboard!