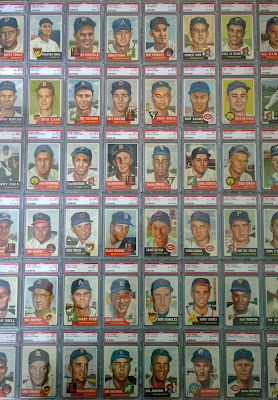 Last October, I made the difficult decision to sell off my 1953 Topps graded set, which was over 100 cards in size.  While I held onto the Red Sox and select other singles, I parted with over 100 PSA 6 '53s in the sale.  I netted $1,750 for the lot, which is by far the most I've ever made in a single card sale in my time in the hobby.  I decided to save/invest $1,000 of the proceeds, and spend the remaining $750 on some cool replacement cards for my collection.

In the first post in this series I covered the sale.  In the second post, I started sharing my pick-ups with the resulting windfall in the form of 16 1953 Topps cards from COMC to re-initiate my set build in raw format.  In the third post in the series, I picked up another 33 raw '53 Topps cards courtesy of eBay.  So at this stage I'd spent $138.20 and acquired 49 1953 Topps cards, nearly half as many as I'd sold off in the first place and still with over $600 in play money left to spend.

For the next installment in the series, I decided to chase a few 1971 Topps HOFers.  Not sure why I had this thought at the time, maybe it was knowing that 2020 was 1971's year for Topps Heritage.  Anyway, after picking up the Nolan Ryan from the set in a nice-looking PSA 4 a while back, I was hoping to find some companions for Nolan in the same grade.  The 1971 black borders are notoriously tough, so I just wanted my cards to look presentable, and was more concerned with authenticity and frugality than with perfection.

In the end I netted an additional six players with plaques in Cooperstown (mostly) from the iconic set... 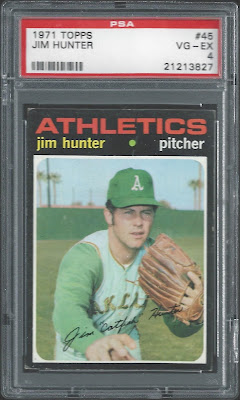 First up, the three pitchers, starting with Catfish Hunter.  This is a great example of how going for a visually-appealing lower grade is very budget friendly, as I paid just $7 for this card.  1971 was Hunter's first 20-win season, and it began a stretch of five consecutive years where he'd reach that plateau (while also capturing three World Series titles!). 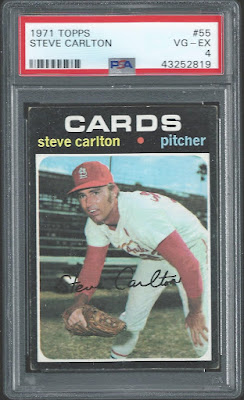 Next up, the great Steve Carlton!  Coincidentally, Steve first hit the 20-win mark in 1971 as well.  The following year he'd win his first of four NL Cy Young Awards.  Amazingly, this card was had for $6.99, a penny cheaper than the Catfish Hunter even.  As you can see, I went for some low-hanging fruit at first as far as HOFers from this release go. 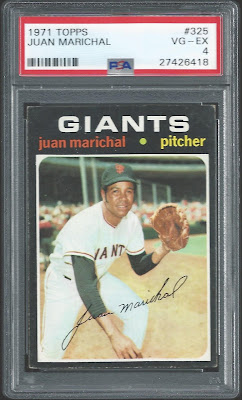 Closing out the starting pitcher portion of my pick-ups is Juan Marichal.  This was actually the cheapest of the three, picked up on COMC for just $5.80 last November.  Unlike the first two hurlers, Juan's 20-win seasons were behind him by this point.  You could argue that 1971 was his last great season actually, as he still logged 279 innings, 18 wins, and posted an ERA below 3.00. 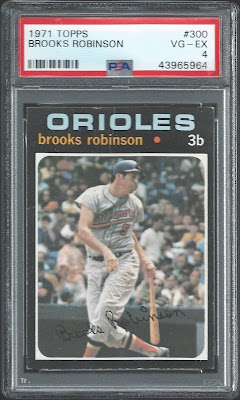 Moving on to our trio of offensive players now, beginning with the Human Vacuum Cleaner himself, Brooks Robinson.  I always liked the image of Brooks that Topps chose for this set.  Even though it looks like he may have just swung and missed, it's a great shot nonetheless.

I always get a kick out of Brooks' "small visor" batting helmet.  In fact, I just watched the 1971 Topps All-Star game the other day (with no new sports I've been enjoying throwback games on occasion) and commented about how Brooks' helmet reminded me of this card.  $6.57 for a card I've desired for years now, not too bad! 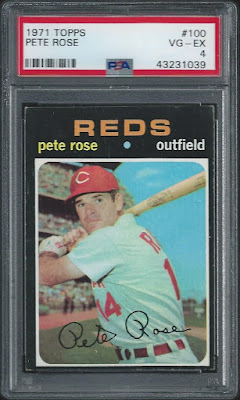 Alright, so one of the six cards I picked up is a subject who is not enshrined.  I am of the opinion that Rose should be allowed in, though unfortunately it does not look like that will happen before he passes away.  In any event, I wanted to pick up the hit king's card for my '71 collection regardless of his HOF status.  This card was more expensive than the first three combined, at $23 even.

Finally, the card I was most excited about from this small grouping... 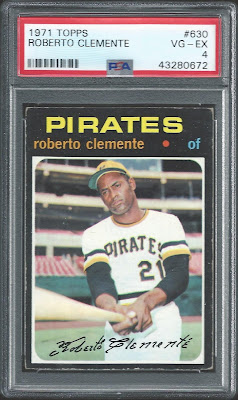 ...my newest playing-era Clemente!  I aspire to one day own the entirety of Topps' flagship Clemente card run, from his 1955 RC through his 1973 issue.  For $26 I crossed another card off that list here.  This one is a relatively high number, and like the other cards in today's post is all I could ever ask for as far as condition goes from this set.

Just a classic shot of Clemente and his bat barrel, simply fantastic.  As far as pure aesthetics of the photograph goes, I prefer this one over the other two flagship Topps Clemente cards in my collection so far ('61 and '69).  For just a bit more than a blaster would set me back, I can't believe it took me this many years to track one of these down.  A satisfying purchase with my '53 Topps funds, indeed!

Put together with the Nolan Ryan, Hank Aaron and Frank Robinson cards that I already had from this release, I'm on the cusp of hitting double digits in my quest for the HOFers from the set now!  Running total for these six cards was $75.36.  I'll certainly keep my eye out for opportunities to continue with this '71 HOFers/stars quest in the coming months.

Those cards look amazing in a collage like that. It actually makes me want to pick up enough graded cards from a classic set to be able to take my own photo like that.

Whew, I thought I was the only one who noticed the small visor Brooks Robinson wore. I always used to think it was a mistake or some weird perspective shift when I saw it on his cards until I discovered that, no, the lip of his batting helmet WAS actually smaller than normal!

Thanks guys! Jeremy, that is actually a photo I took before sending all the cards away after the sale. You can't beat a giant expanse of vintage cardboard. Nick, that's hilarious and I feel the same!