Cardboard Keepers - Another Hard-to-Believe eBay Flip Lands Me a Legend!

Today's keeper card comes courtesy of a recent eBay flip.  I've been on a pretty incredible run of these in the past couple of months.  I guess my timing for thinning out my collection and selling some unwanted items matched up nicely with the insane recent rise in the sports card market.  So far this year I've:
Today's flip is more in line with the Jordan RC, in that it was a many-to-one flip in terms of number of cards coming and going.  Flipping a bunch of smaller cards into one bigger, more valuable card is actually my favorite method, since it's in line with my goal of reducing the overall size of my collection.

So, what did I part with to raise the funds? 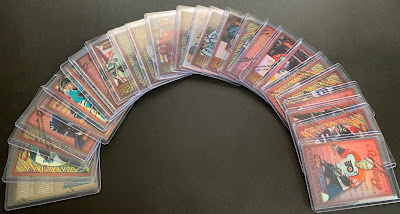 For starters, a lot of 26 1995-96 Topps Finest hockey refractors.  This was every single bronze (the most common, though still rare) refractor that I'd accumulated over a period of years.  Most were had on COMC for a buck or less, but a couple (like the Jagr and Lemieux) were a few bucks on eBay.  There's a very good reason that I didn't mind parting with these, and in fact had been meaning to for some time, but that's a post for another day.

After a bit of back and forth with the eventual buyer, I let the lot go for $95.  This was a fair price for both of us, and I'm certain it's more than I paid for these individually over the years.  The buyer is working on a complete set and was so excited to land this many at once, and I was about halfway to raising the funds for the dream card I was targeting.  A win/win! 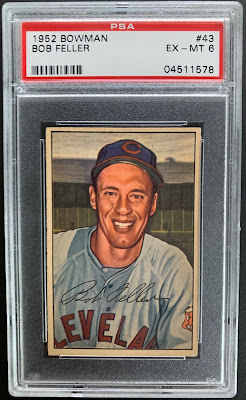 Next up, a '52 Bowman Bob Feller.  I had to think long and hard about this one, given that I have a long term passive goal of completing the 1952 Bowman set.  The thing is, though it's not that easy to tell in the scan, this card has a yellowed tint to the front that makes it stand out noticeably when viewed alongside the couple of dozen other singles I have from this set.  Enough so that it always drove my OCD a little nuts, and thus Bob Feller was left on the proverbial cutting room floor as far as my purging goes.

This is a card I absolutely intend to pick up another copy of someday, when the time is right and the right deal comes along.  For now, I was happy to collect $75 for it, a deal that again I think was fair for both parties. 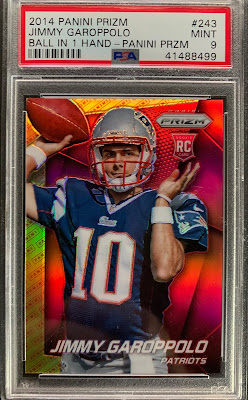 Finally, I sold this very shiny Jimmy G rookie card for $35.  It doesn't mean much to me as a Pats fan since Garoppolo plays for San Francisco these days, and it was an easy choice to part with for that reason.  I got $35 for it, which truthfully is probably right around or even slightly less than what I paid for it when I picked it up.

I was excited to let it go, because when the funds from those three sales came through I had what I needed in my Paypal account, and sprung into action!

With just a few clicks of a mouse, a card I've drooled over for pretty much decades now was finally mine. 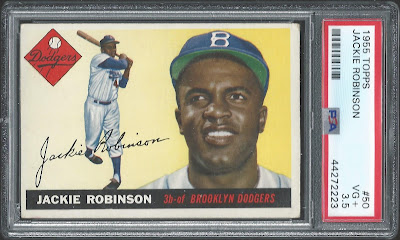 Ain't she a beauty?  I had this absolutely stellar looking '55 Robinson in my eBay watchlist for weeks before pulling the trigger, hoping the entire time that nobody would grab it before I had a chance.  It's graded a 3.5 "VG+" by PSA, but I can tell you from looking at many, many examples of this card over that period of weeks that this is one of the nicer looking examples in terms of overall presentation that I could find at this grade/price point, and even a couple grades above this quite honestly. 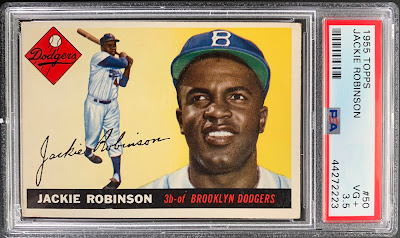 Here's a better look, taken with my iPhone since my scanner tends to wash out PSA slabbed cards a bit.  If you click the image for a larger version you may be able to tell that the top right corner has a ding, which I'm assuming is why this card was graded as low as it was.

To me, it's an absolute stunner.  Good centering, not perfect but good, and just a clean, vibrant front.  Those colors are absolutely popping off the card even 60+ years after it was produced.  No surface creases, "snow" over Jackie's face, or any other detractors like that.  Not that I even mind that type of stuff when it comes to cards like this, but this example doesn't seem to summer from any of that.

This card makes me smile every time I hold it in hand and look at it.  I don't miss that Bowman Feller much now! 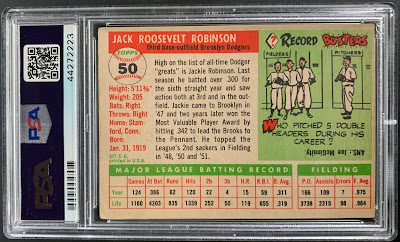 Here's the back, a little off center but perfectly clean.  Like the front, colorful and vibrant.  Even if I am fortunate enough to collect for many decades to come, I will never, ever have to upgrade or replace this Jackie!

Well, that's the story of how I acquired the first playing-era Jackie Robinson to officially enter my collection.  To be able to do so using cards I already had laying around and wasn't totally appreciating makes the experience even better. Cleared out two graded cards, and a couple dozen more in toploaders, and brought in a single stunner in return.  More space freed up in my card room, and a card I've always dreamed of owning in had, now that's how I like to collect! 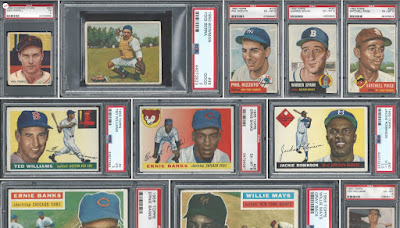 That's 36 cards down in the baseball Cardboard Keepers collection altogether now, 964 to go.  You can see the virtual album here if you're interested.  As you can see in the snippet above, it's starting to look pretty impressive thanks to all this eBay flipping.

I'll be back with more keepers soon, in the meantime thanks as always for stopping by...
Posted by shoeboxlegends at 11:00 AM

Awesome flip! Can't wait to read your 1995-96 Finest post. That was one of my favorite sets and products to buy back in the day. I was actually trying to build the gold refractor set, but that guy hoarding the Jagrs killed that idea.

Well done. What a great card!

That's a beauty! I really need to grab a playing-days Jackie someday. Congrats on the pickup.

Jeez, if that's a 3.5, then I can't even imagine what most of my vintage cards would grade at. Nice finds, my friend!