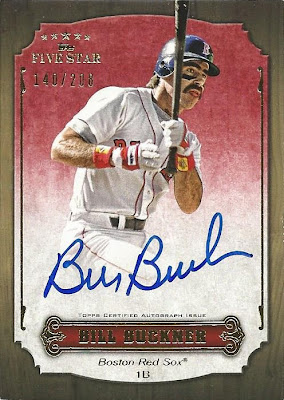 I'm of the viewpoint that one's collection is sort of a chronological history of sport printed on cardboard and stored away in boxes and binders.  I ultimately collect baseball and hockey cards because I thoroughly enjoy those two sports, especially their long and illustrious histories.  A complete history focuses on the bad as well as the good though, which is why I've wanted to add a Billy Buckner autograph to my Red Sox collection even though he's most known around these parts for "the play" that "cost the Sox a Series".  The fact that he was involved in that play is just all the more reason a good Red Sox collection should have some Buckner cards in it.

I won't even get into all of the evidence that he was unfairly scapegoated (like all of the other players who blew it in that infamous inning, forget the entire game that was still played after it).  I was only four years old at the time, so obviously this didn't burn me as a fan, although growing up in New England I heard many, many references to, and bad jokes about, the play through the years. 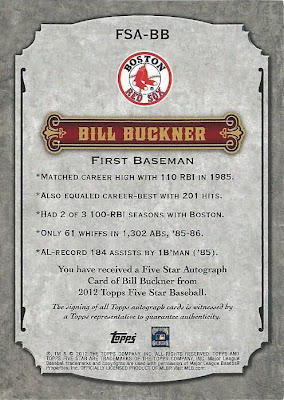 The fact is, Buckner was a far-better-than-average player throughout most of his career, and a Red Sox player that I am very proud to own an on-card auto of.

On a side note, Topps Five Star definitely had some major issues, atrocious condition of many cards right out of the pack in what was supposed to be an uber-high-end product being the worst.  That being said, the cards are beautiful, the autos are on-card, and you can really get some of these at a total steal on the secondary market.  This has to be one of my favorite Red Sox autos acquired in the past year and it set me back all of $9.99 plus a couple bucks shipping.

How about you, did you pick up any Five Star, either full price or on the secondary market?
Posted by shoeboxlegends at 11:28 AM

I was raised to blame Schiraldi and Stanley.

picked up three Five Star cards (2 via trade, one from eBay)