Just a quick autograph post today, a card I actually picked up at the tail end of 2012: 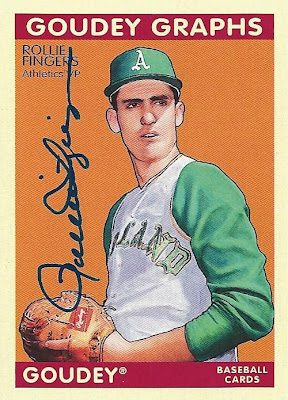 I can't really say this card fits into my collection necessarily.  It's not a player or team I collect, and it's not from a set I'm chasing, but it's one of those random additions to my collection that I just had to have for whatever reason.

This is actually my second Fingers auto, but I like this card much better than the first, I think in part because I've always been partial to the Goudey releases.  The 2007 Goudey set was what got me back into collecting 6 years ago and the autos are on card which I think all collectors prefer.  I watched this card for a good long time before finally reaching an agreement with the seller on a price of $12, a steal as far as I'm concerned.  I really like that the signature is vertical, it's an interesting placement but I think it works well. 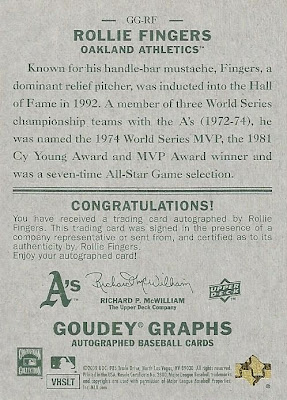 There's only one thing that would have made this card better in my opinion, the appearance of Rollie's signature handlebar mustache.  Oh well, maybe I'll find a better replacement someday, but for now I'm more than satisfied for the price...
Posted by shoeboxlegends at 7:41 PM

One of the all-time great signatures.

Absolutely gorgeous card. Love it. This one gives me cardboard envy.

Definitely a very nice auto to have!!!