A while back I read a post on The Chronicles of Fuji that opened my eyes to a set I was never aware of.  Back in 1993 Pinnacle released dufex versions of its 30-card Cooperstown set.  Fuji warned that they were a tough find, as there were supposedly 1,000 or less of each card produced, and he was certainly right.  I was astonished that I won this Andre Dawson as the sole bidder for $4.99.  Currently there aren't any cards from this set on eBay or COMC with even a starting price that low. 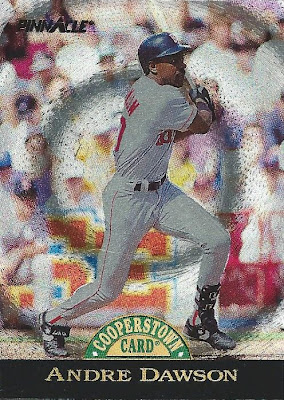 As a child of the late '80s/early '90s I'm of course a fan of dufex cards.  My favorites were the Pinnacle Rink Collection hockey cards.  I can certainly see how some collectors could find them obnoxious, but to me they're pure nostalgic cardboard gold. 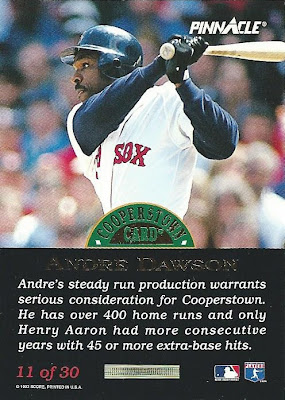 This was certainly a nice addition to my Red Sox collection.  I'd like to chase down Roger Clemens at some point, given that he's the only other Red Sox player on the checklist.  Nolan Ryan and/or Will Clark would be nice as well, but I somehow think those may creep above the price I'm willing to pay for a '90s single...

Thanks for the inspiration for this card Fuji!
Posted by shoeboxlegends at 6:38 PM

Those are very cool! I don't think I have heard of them until now. I'll have to keep on the lookout for some.

Sweet card. You definitely got a deal on that card. I paid much, much more for my Gwynn.

That's about what I paid for my Winfield. Now I rarely seem them listed for under $20. I just don't think all that many people know about the set.