This week's Signature Sundays post features what will likely be the final Whalers autograph parallel from the 2012-12 Panini Classics Signatures set to be shown here on Shoebox Legends.  The subject is none other than longtime fan favorite Geoff Sanderson: 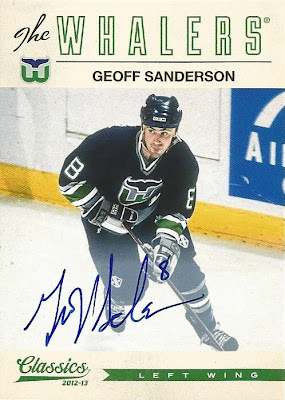 Geoff's is an autograph that I've wanted to pick up for a long time now.  He was drafted fairly high by the Whalers in the 1990 NHL entry draft, 36th overall.  That was actually the team's second pick as they selected Mark Greig 15th overall in the first round (40 total points in 400+ NHL games, ouch!).  He appeared in just two games towards the end of the 1990-91 season but still managed to register his first goal.

Sanderson really had his breakout year in his second full season, 1992-93.  He registered career highs in the big offensive categories with a whopping 46 goals, 43 assists, and 89 points.  Yes I know there were an insane amount of goals scored that year, but those are some impressive totals nonetheless.  Sanderson was fast, durable and relatively consistent.  More importantly to me, he was committed with the team and was on the roster straight through the team's departure for Carolina.  His 189 goals in a Hartford sweater are the fifth most of any player (behind Francis, Dineen, Stoughton and Verbeek).  He was fifth in career points for Hartford as well, behind those same four players. 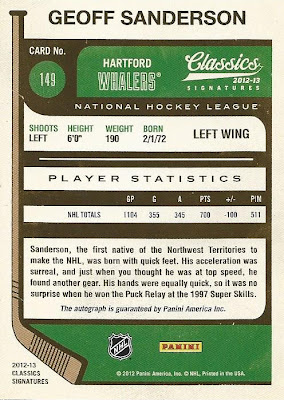 The reason I say this is likely the final Whalers autograph parallel from this set that I'll ever feature is that I'm missing only one at this point, but it's a big one.  There is actually an SSP autograph of Gordie Howe in Whalers sweater with an extremely limited print run, although I can't find any information on exactly how few are out there.  I've seen just one go up on eBay so far, for $350 with the option to make an offer.  The Whalers collector in me really wanted this card to complete the team set, but even my $150 best offer was much too low for the seller.  It went relatively quickly for the unreal price of $300+, if you can believe that!  Who knows if I'll ever see another, and even if I do I certainly won't be shelling out that kind of cash for a modern day auto.  For now I'll enjoy the Sanderson, Burke, Verbeek, Samuelsson and Tippett autos that I was fortunate enough to snag!
Posted by shoeboxlegends at 9:00 AM