Surprise, surprise...for this week's Signature Sundays post I'm going back to the 2012-13 Panini Classics Signatures well.  Today we've got a couple of goaltenders that your casual, modern-day hockey fan may not recognize by name.  Anyone who was watching the game or collecting cards in the '90s will recognize them though... 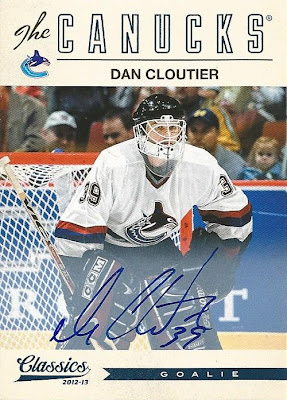 First up is Dan Cloutier.  Although he spent brief time with the Rangers, Lightning and Kings during his NHL career, the Canucks are the team that fans would most readily associate Cloutier with.  His most notable stretch was a nice run with Vancouver from 2001-02 through 2003-04 where he posted 30+ wins, a sub-2.50 GAA and a .900+ save percentage for three consecutive years.  Dan's got a nice, large signature and I like that he includes his jersey number here. 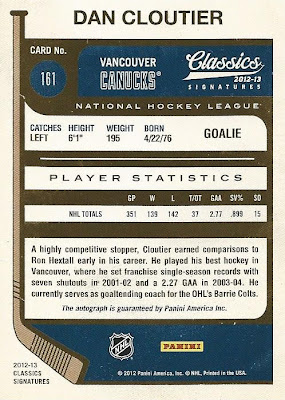 As you can see, Cloutier managed to rack up 139 wins in his NHL career, including 15 shutouts. 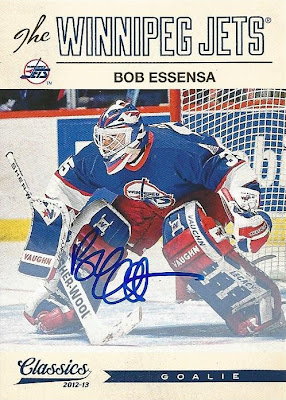 The other goaltender I'm featuring today is Bob Essensa.  His autograph isn't much to write home about, but his NHL career was interesting.  He came into the league with Winnipeg and after some promising early seasons was dealt to the Red Wings with the hopes that his goaltending would take Detroit to the next level.  Basically he was a bust in Detroit though, and he found himself demoted to the IHL and AHL.  After two full seasons without playing a single NHL game, he managed to bounce back and went on to play more than 150 games after his return to the league. 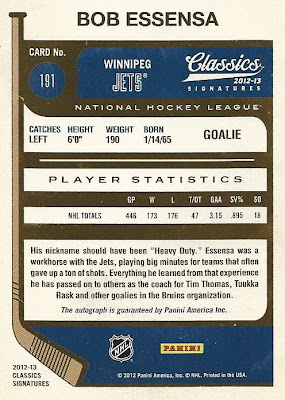 He may not have the GAA or save percentage stats that Dan Cloutier does, but his 446 games played is a symbol of Essensa's perseverance and dedication to the game.

I'm happy to add these two autographs to my hockey card collection, especially since each one ran me just $1.99.  They came from the same seller as well, so I was able to pick up the lot for around $6 shipped.  These two represent my 12th and 13th autos from the Panini Classics Signatures set.
Posted by shoeboxlegends at 9:11 AM