Time for the penultimate post of the huge package of Red Sox I received from Dustin of Coot Veal and the Vealtones. I've come this far so I certainly need to see this thing through and post every single card that he sent which I needed. 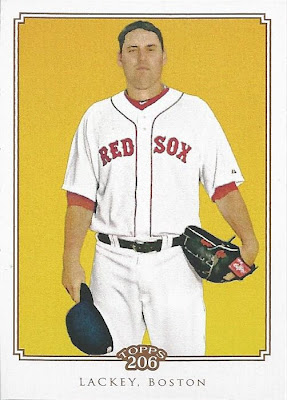 Starting off today's run is a player who has surprised Red Sox fans more than perhaps any other this year.  Lackey has been solid, and just when it looked like an injury had perhaps ended his season if not his career, he's come back off the DL and pitched almost like a number one starter his past few times out.  His performance has been huge for the team while Buchholz has been out. 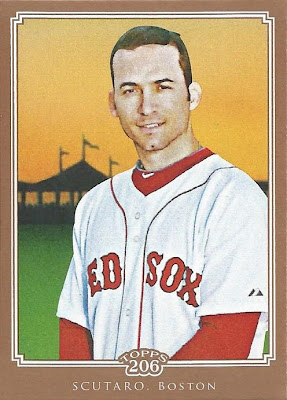 From the same Topps 206 set, here's a Marco Scutaro bronze parallel.  I'm not a huge fan of hatless players so this set never really did much for me. 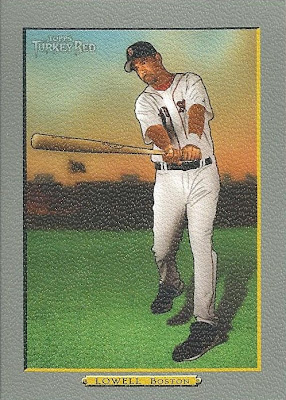 Now here's a set I love, Turkey Red!  This one's from the 2006 release, back when Turkey Red was a standalone set and not an insert.  Nice looking card of Mike Lowell right there. 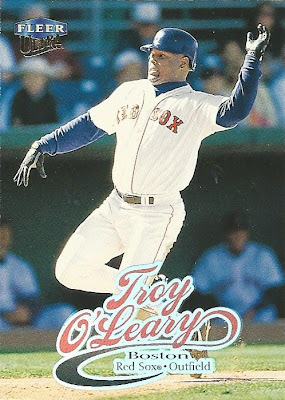 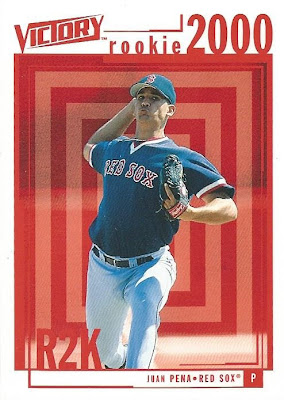 I confess that I had never heard of Juan Pena before receiving this one.  His story is a sad one I learned, after starting two games for the Sox in 1999 and going 2-0 with a miniscule 0.69 ERA, he was injured in spring training 2000 by a line drive and never pitched in the Majors again.  What could have been!  In any event, 2-0 with a 0.69 ERA is a good career stat line to have I guess. 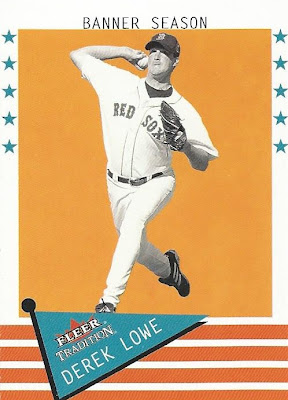 I like this Banner Season subset from Fleer Tradition, great old-timey feel to this card. 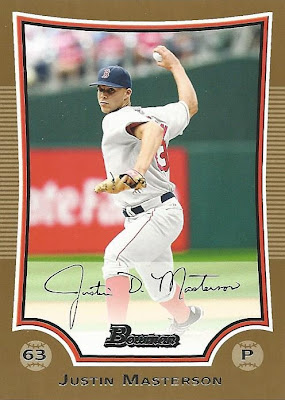 Justin is now dealing for the Indians, but did you know he was born in Kingston, Jamaica? 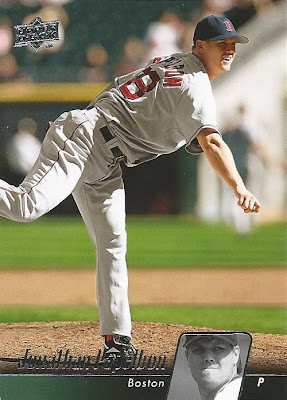 I never seem to hear much about Papelbon now that he's gone from Boston.  Maybe has something to do with the fact that the Phillies are having a tough year. 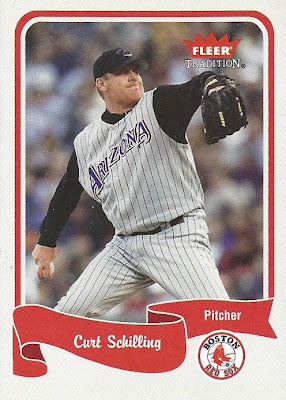 Here's a cool card that depicts the trade that brought Schilling to Boston from the D'Backs.  I liked Curt a lot more when he was pitching for the Sox and not blowing RI taxpayer money on his failed video game business.  If you have no idea what I'm referring to look up 38 Studios.  As someone who calls the small state of Rhode Island home I still find the whole thing off-putting. 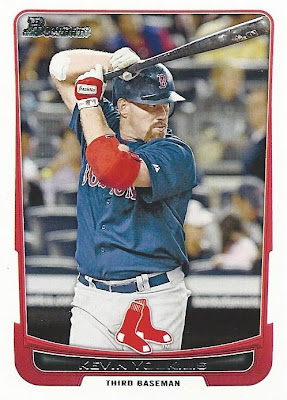 Here's a Bowman Kevin Youkilis.  It kind of looks like he has a small pair of Red Sox hanging from his belt due to the logo placement. 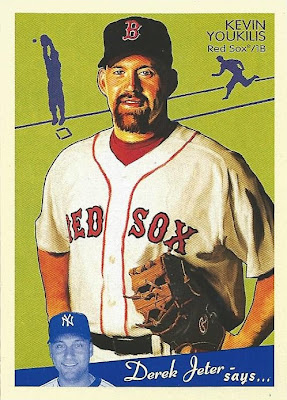 When I first stumbled on this card I swore it was a double, and that I had all the Red Sox from this set.  Well, I was wrong. 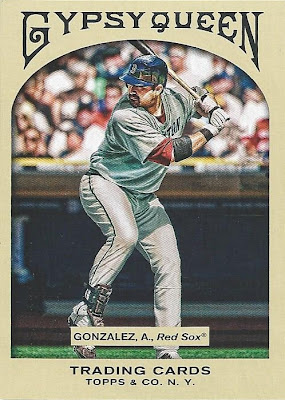 Continuing on that same theme, here's another card I thought for sure I was already in possession of.  Another one off my 2011 Gypsy Queen want list, and another new Adrian Gonzalez Red Sox card! 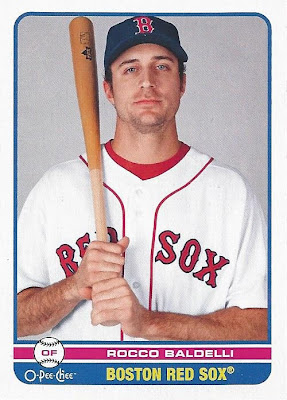 Back to the Rhode Island connection, here's a card of a well-known local kid (Woonsocket, RI) who made the bigs, Rocco Baldelli.  I'm definitely one of those collectors who favors the 2009 O-Pee-Chee release. 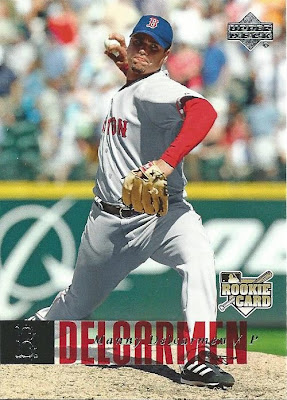 I never heard much about Manny Delcarmen after he departed Boston.  A quick search seems to show that he's in the Orioles minor league organization.  On a side note, 2006 Upper Deck was a monster of a set!  This is card number 1034. 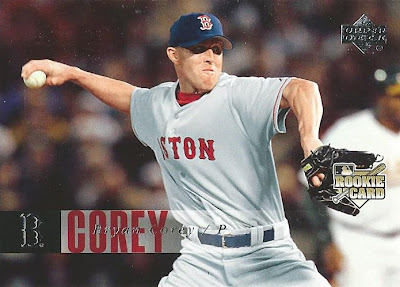 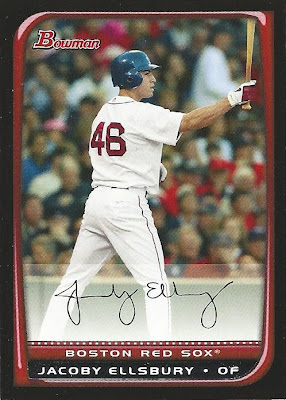 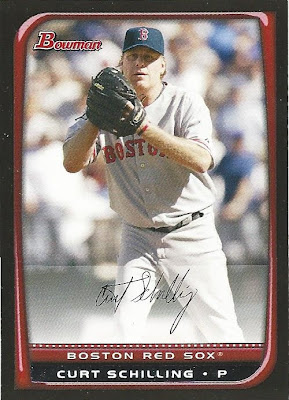 A couple of new Bowmans... 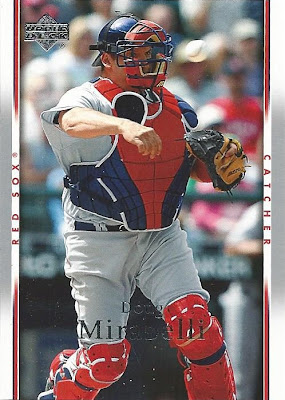 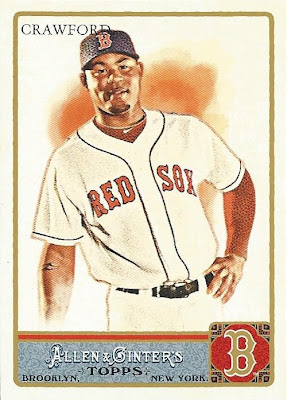 I feel compelled to say this any time I run across a Crawford card, but I still can't believe the Dodgers took Carl and his contract! 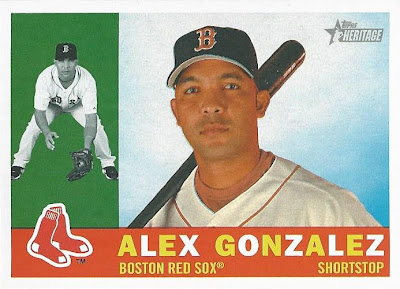 Finishing things off is an Alex Gonzalez Heritage card.  Alex is still floating around with the Brewers, but looking at his offensive numbers I think it's safe to say this may be his final season.

There you have it, 21 new Red Sox cards.  I've got one more post to go to finish this package off...
Posted by shoeboxlegends at 8:15 AM