Let's take a look at what came out of a $20 spending spree on COMC, rather than me buying a blaster and giving the money to a big box store. 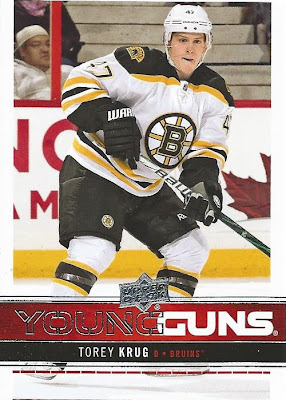 I was psyched to land this card a while back, especially for the price.  I was at a sports bar with my wife watching one of the early games in the Bruins/Rangers series where Krug was just lighting it up.  During the intermission I hopped on my smartphone and just 2 minutes later this card was mine for $1.25, gotta love technology!  Not long after that, prices rose quickly and the cheapest one offered on COMC as of this morning is a whopping $17.47! 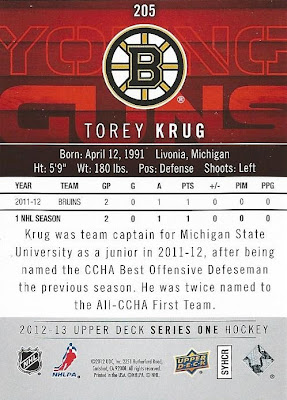 That's just a great deal right there.  I'm really looking forward to what Krug and Bartkowski can bring to the team next year. 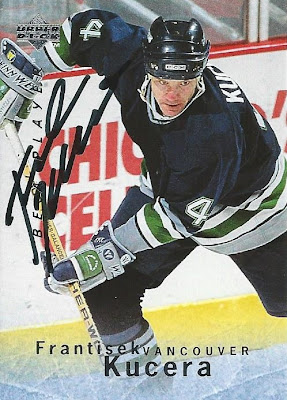 Here's an autograph that I picked up and now kind of regret, but for the price I guess I don't mind.  Can you identify why I'm disappointed?  Yup, even though this looked like a Hartford Whalers autograph at first, Kucera is actually listed as a Vancouver Canuck, Upper Deck just didn't have an updated photo to use.  Oh well, I doubt a certified Kucera Whalers auto will be released anytime soon, so this is probably the closest I'll ever get. 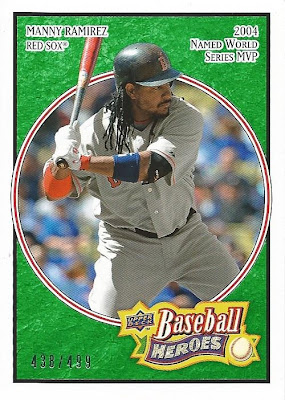 Here's the beginning of a small run of 2008 Upper Deck Heroes Red Sox.  I've talked numerous times about my love for the Heroes design, so combine that with the fact that I'm a sucker for a good colored parallel and I just couldn't turn these down for the price. 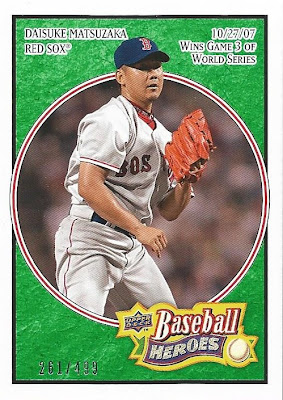 I used this logic with these parallels...would I snag them out of a dollar bin at a show?  If so, how could I pass when I could land them for 2/3 to 3/4 of that price? 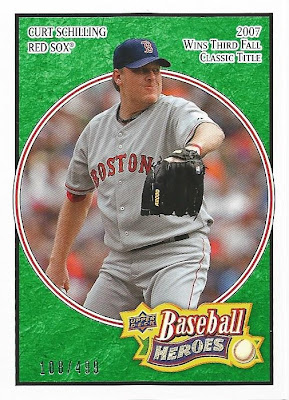 The emerald parallels are numbered to 499 copies, so I should be able to knock off a team set relatively easily. 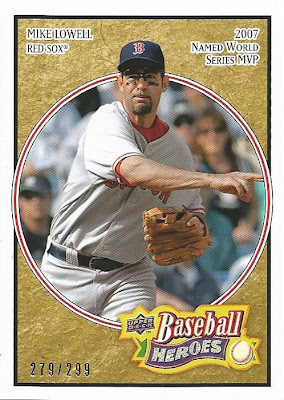 Here's the best steal of the four Heroes cards, commemorating Lowell's World Series MVP in 2007 and numbered to 299 copies, for under $.50! 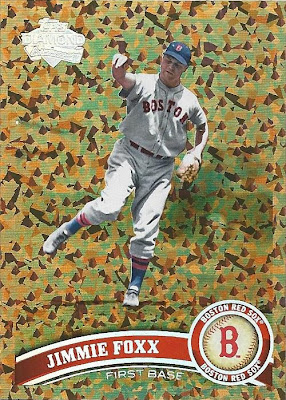 Another guilty collecting pleasure of mine, the Cognac Diamond Anniversary parallels from 2011 Topps.  Topps has kind of beaten these shiny parallels to death in recent years, but I still think the originals from 2011 are the best.  The retired stars are my favorite, so I gladly forked over an even $1 for Jimmie Foxx. 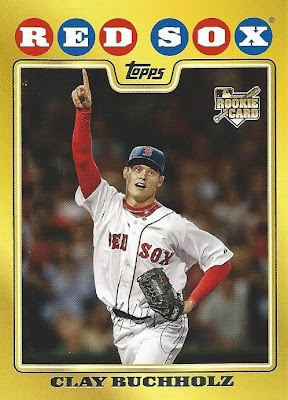 I had no idea this K-Mart gold parallel even existed.  When I picked this one up Buchholz was still on his early season run before he was sidelined by injury, but I'm happy to have it nonetheless. 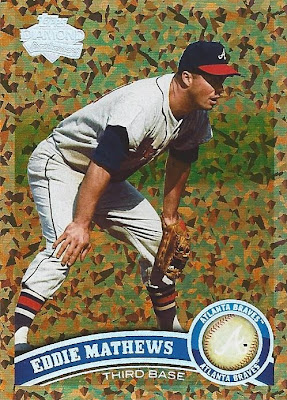 Maybe someday I'll end up trading or selling this one, but I'll hang onto it for now... Another card that I had no idea existed.  I didn't buy any Upper Deck in 2007, I was just getting back into cards that year.  These are cool inserts and there are a few other Red Sox on the checklist, but they're surprisingly expensive so Carlton is the only one I grabbed for now. 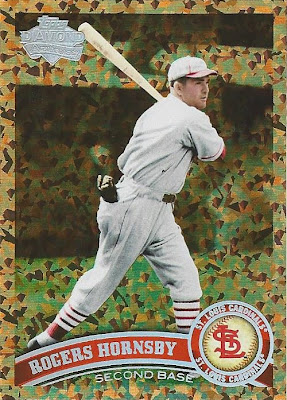 One more retired Cognac parallel, how could I pass this one up for $.72? 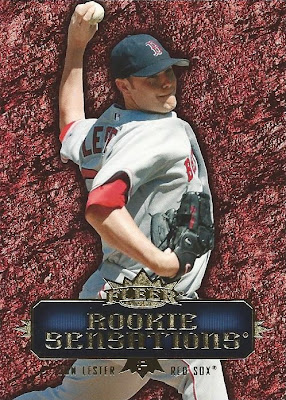 Like the Buchholz card above, I grabbed this one when Jon was on an incredible run to start 2013.  He hasn't looked so good lately though, and got lit for 5 earned runs in 5+ innings just last night against Seattle.  He's still one of the best lefties to ever pitch in Boston, so I'm happy with the cheap rookie insert. 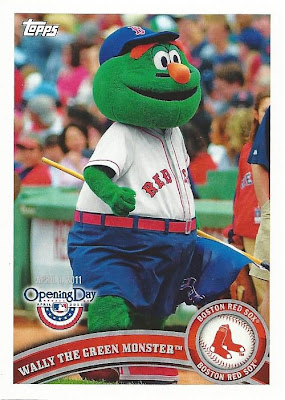 Not much explanation needed here, I will have every Wally the Green Monster card out there!  This is my fourth. 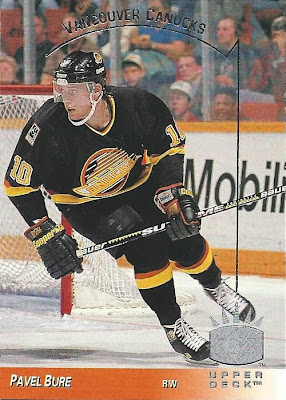 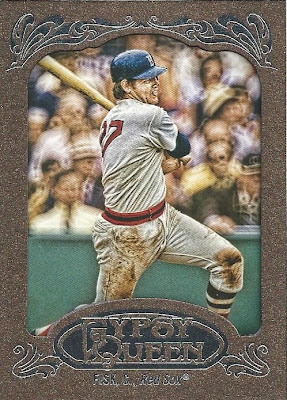 A great card here for less than two quarters.  I love the dirty uniform and ghostly looking fans in the stands. 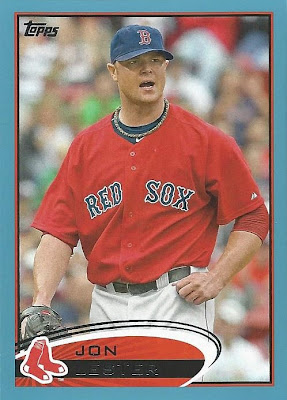 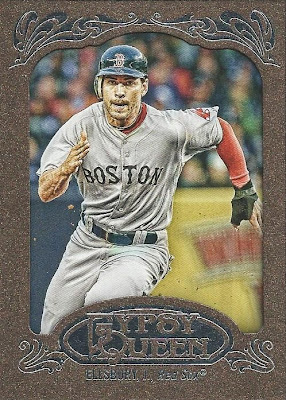 Here's the first of three Jacoby Ellsbury cards in this post, and the most expensive of the three. 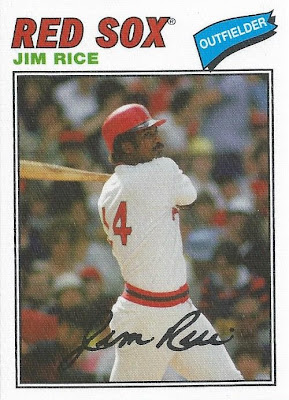 I think this is the last Red Sox player I needed from the '77 Topps Cloth Stickers insert set in 2012 Archives. 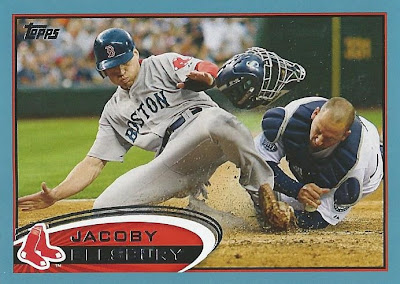 An awesome card, one of my favorites from 2012. 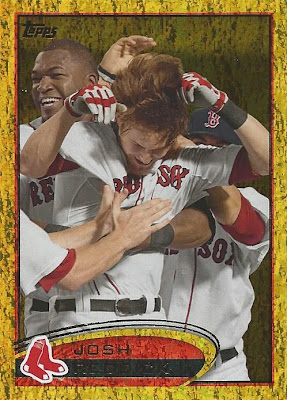 I didn't have any of these Gold Sparkle parallels in my collection so figured I'd grab this one on the cheap.  Besides, Reddick has been pretty damn good since being dealt to Oakland. 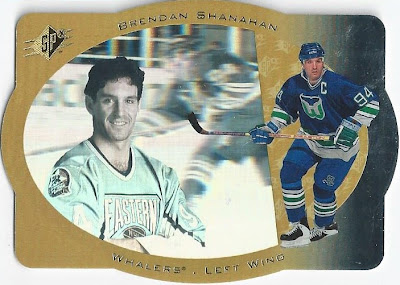 I've had the regular base version of this card and have always been impressed by the design, now I finally have the matching Gold parallel... 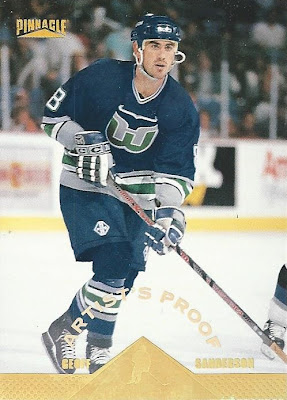 I could be wrong about this, and I'm too lazy to look it up, but I seem to remember these Artist's Proof parallels being highly sought after.  I figured it was rare enough that it was worth the money for my growing Whalers collection. 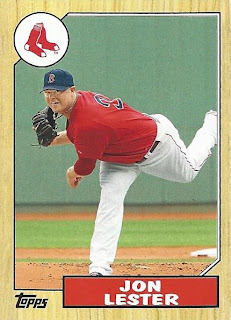 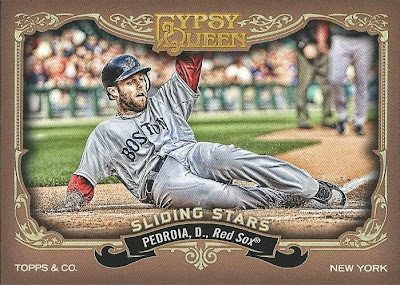 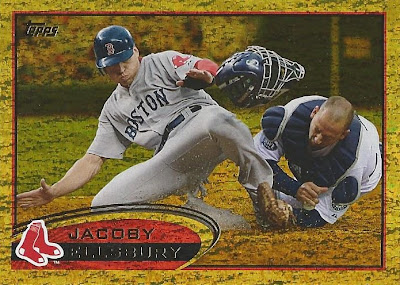 Finally, I like this Ellsbury card so much I grabbed yet another parallel.  25 or so cards for $19.73, as has been the case every time so far I'm much more satisfied with these than what I likely would have pulled from a blaster.  This will probably be the last of these for a while, as I generally let 50 or so cards build up on COMC before requesting a shipment.  Hope you enjoyed!
Posted by shoeboxlegends at 11:42 AM

The Torey Krug rookie is an absolute steal. Great pickup