Let's keep the ball rolling with my 1953 Topps set, with the second card featured this week.  Here's my 55th card towards the set, Bob Del Greco of the Pittsburgh Pirates: 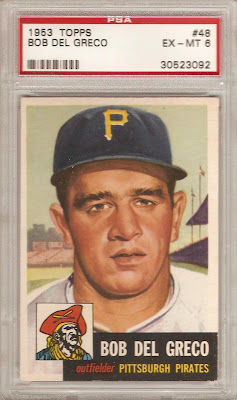 Depicted on this card is a young, local kid from Pittsburgh, who was signed by the Pirates and debuted with the team during the 1952 season at 19 years of age.  Bobby appeared in 99 games in that rookie 1952 season, making close to 400 plate appearances.  The results were less than astounding though, and he wouldn't see another at bat in the major leagues until 1956.  Maybe this is a case where the player was thrown to the wolves at too early an age, and may have benefited from a season or two of minor league ball.

When he finally reached the bigs again, Del Greco began what would become a trend of bouncing around from team to team.  In the early stages of the '56 season he was dealt to St. Louis for Bill Virdon.  I don't think the Cardinals were impressed either as they turned around and shipped him to the Cubs just before the 1957 season began.  Before the season was over he found himself traded to the New York Yankees, where he'd finish out 1957, and play all of 1958 (though he appeared in just 20 games with New York over those two seasons).  In 1959 he again didn't see any major league action. 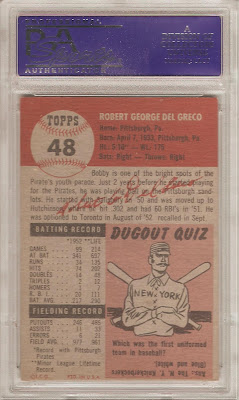 Del Greco was property of the Milwaukee Braves in 1964 but saw no action with the club.  Finally, after going 0-4 in 8 games with the Phillies in 1965 his career was at an end.  If Wikipedia is to be trusted, Bobby supposedly stayed involved with the Pirates after his career was over, and threw batting practice for the team through the early 1990s.  From what I can tell Del Greco, now 80 years old, is still alive and well and presumably living in the Pittsburgh area.

That's going to be a sick set once you complete it. Hope you can find the mantle at a not insane price

Thanks Brad, the Mantle is going to be the absolute toughest find. I've seen about 10 of them go on eBay over the years in a PSA 6, pulling in anywhere from $1,700 to one that just went a couple weeks ago for the highest I've ever seen, $2,900! Someday...