A while back I was fortunate enough to land a small lot of stickers from the 1967 Topps Red Sox set.  I don't see these around my neck of the woods that often, so when I had a chance to jump on some at what came out to around $6 each I couldn't resist.  I showed the first sticker back in August in the form of Dalton Jones, today I've got the rest from the lot... 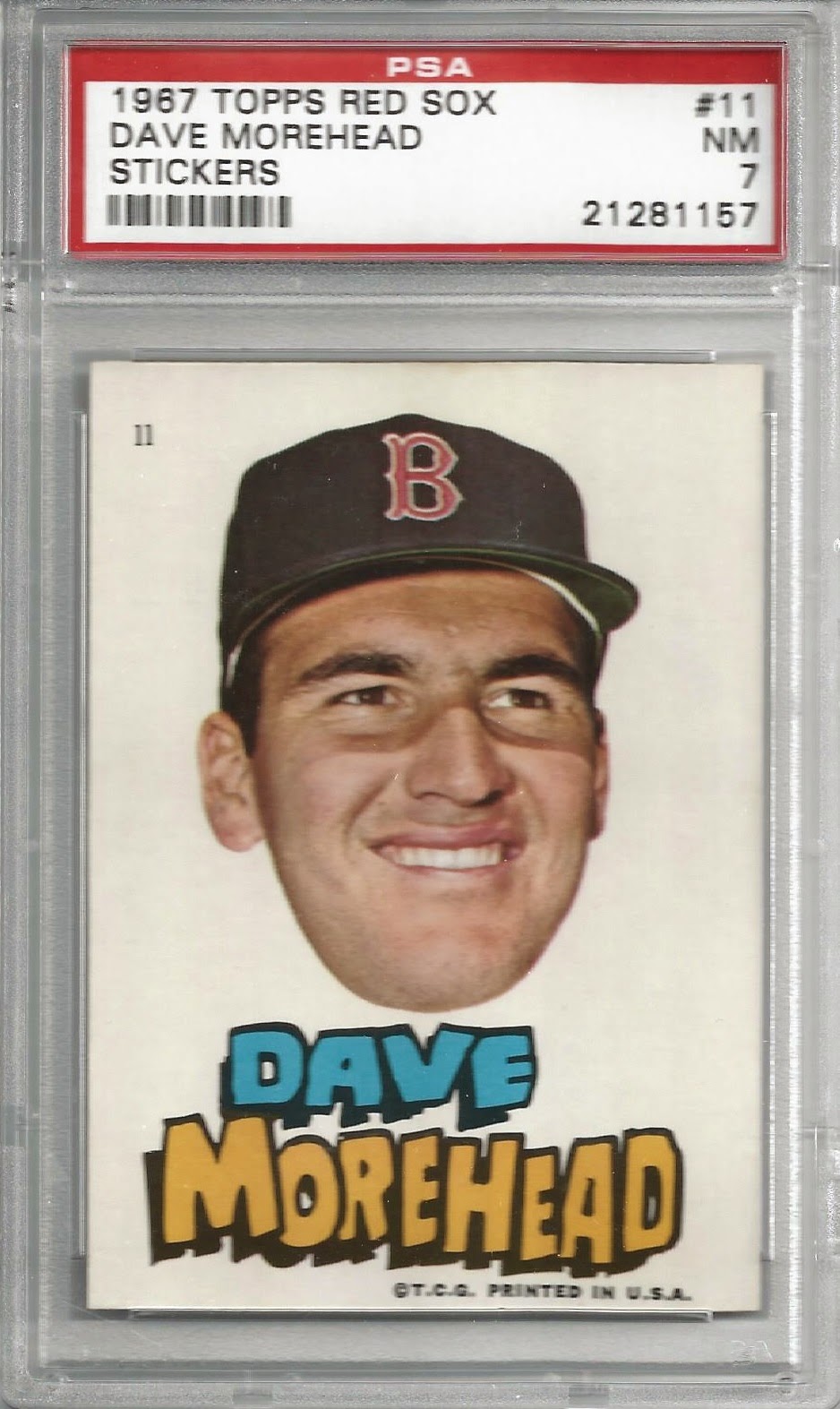 Dave Morehead's MLB career wasn't that spectacular.  He did toss a no-hitter for the Red Sox during a pretty rough 1965 season.  Must have been an interesting no-hitter to witness, because due to the fact that it was a late-season day game and the Red Sox were already out of it there were supposedly less than 2,000 people in attendance.  He does have the most fitting name for this set, as each card features "more head" than your average MLB trading card. 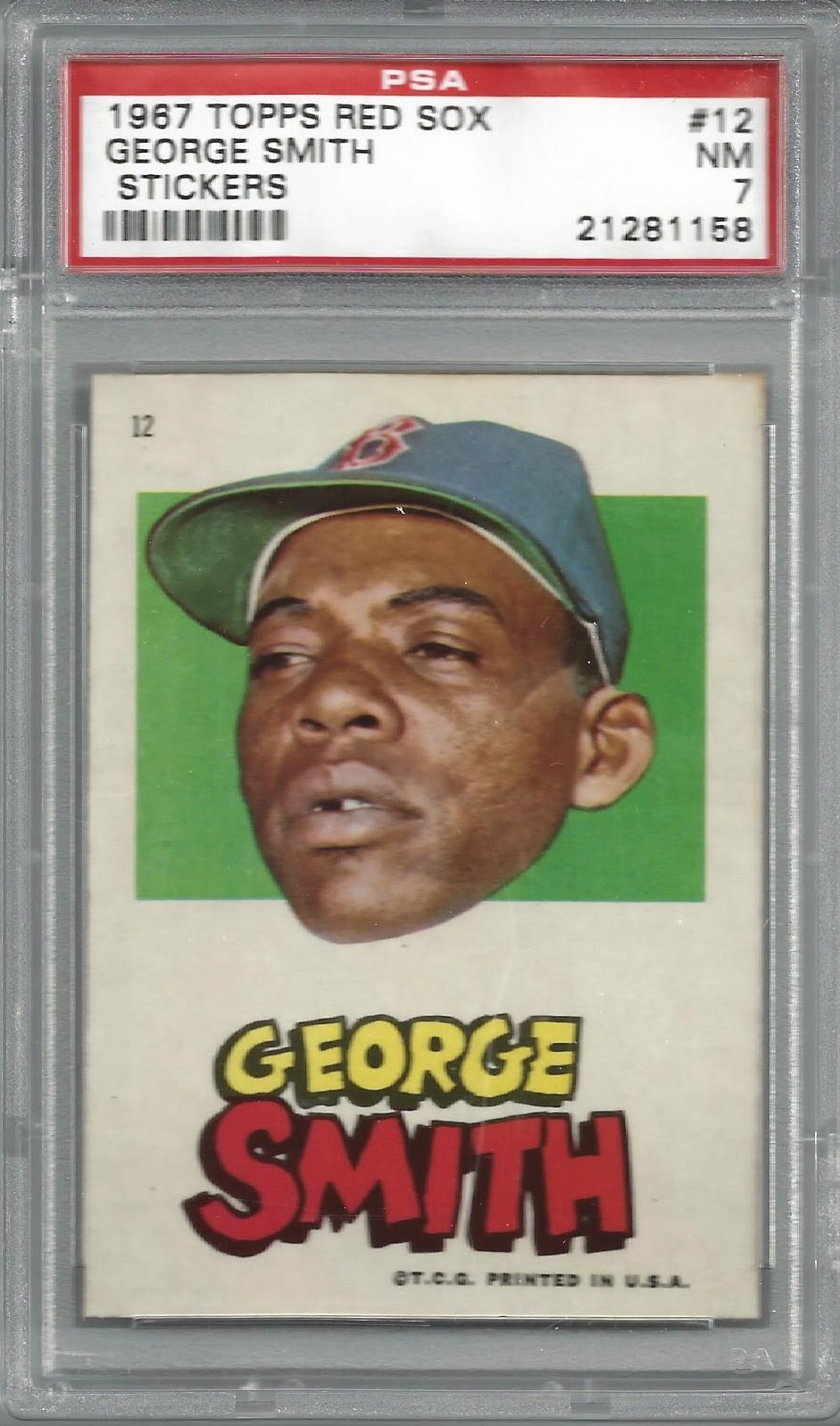 George Smith is included in the set because he appeared in 128 games with Boston in 1966.  Those would actually be the only games he'd play with the Red Sox though, and in fact his final MLB games period.  I'm not sure why some players got a large, colored shape behind their floating heads while others, like the Dave Morehead sticker that led off the post, did not. 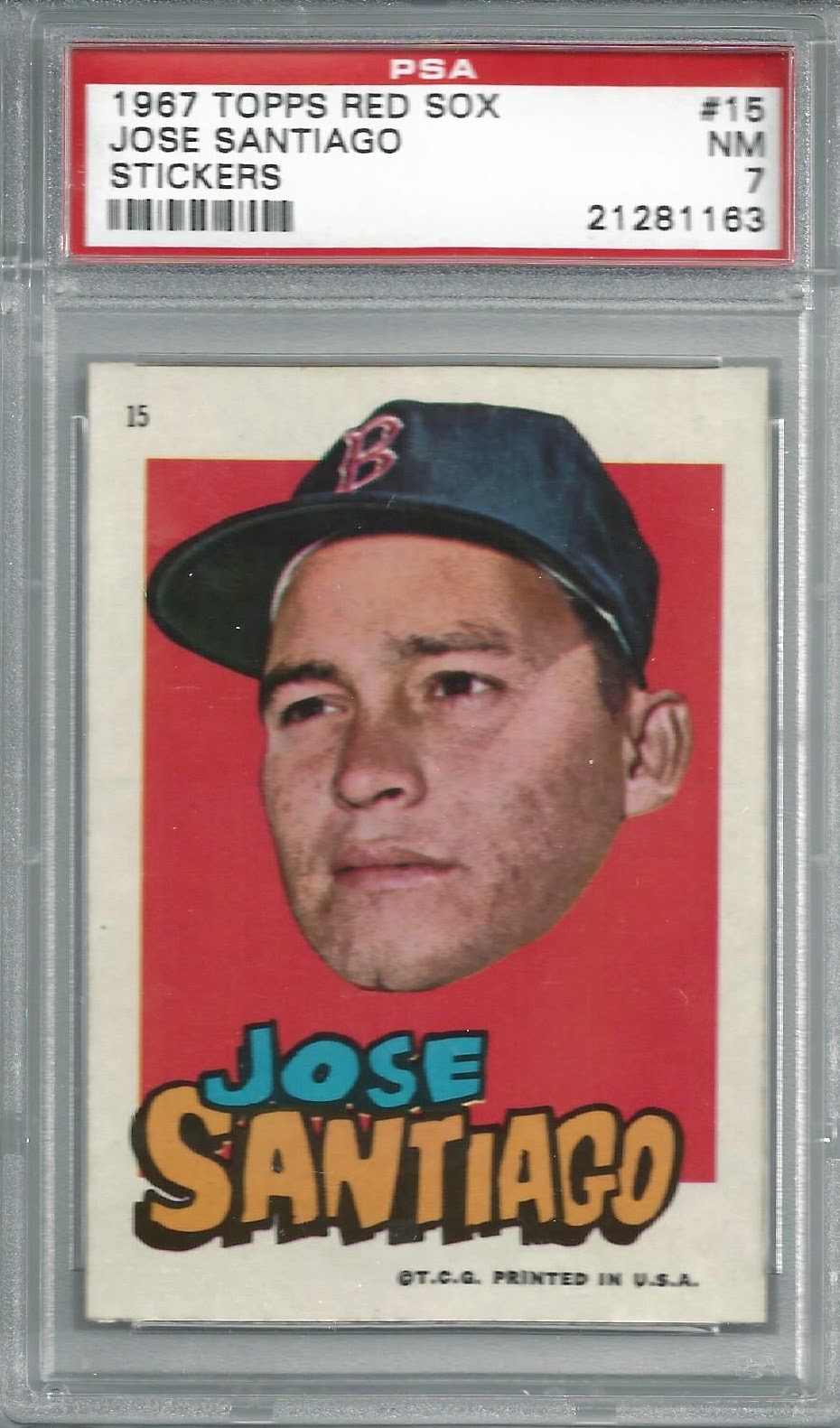 Jose Santiago pitched a ton for Boston in the '67 season.  He made a few starts but logged the majority of his innings via bullpen work.

Because team ace Jim Lonborg had started the final game of the regular season, Jose actually started game 1 of the World Series in '67.  He pitched a hell of a game facing off against Cards ace Bob Gibson, giving up only two runs.  Unfortunately that was enough to earn the loss as Boston scored just a single run.  That single run came from Santiago as well, as he blasted a solo shot off Gibson to help his own cause.  Too bad none of the other guys could manage as much or else the outcome may have been different for Boston. 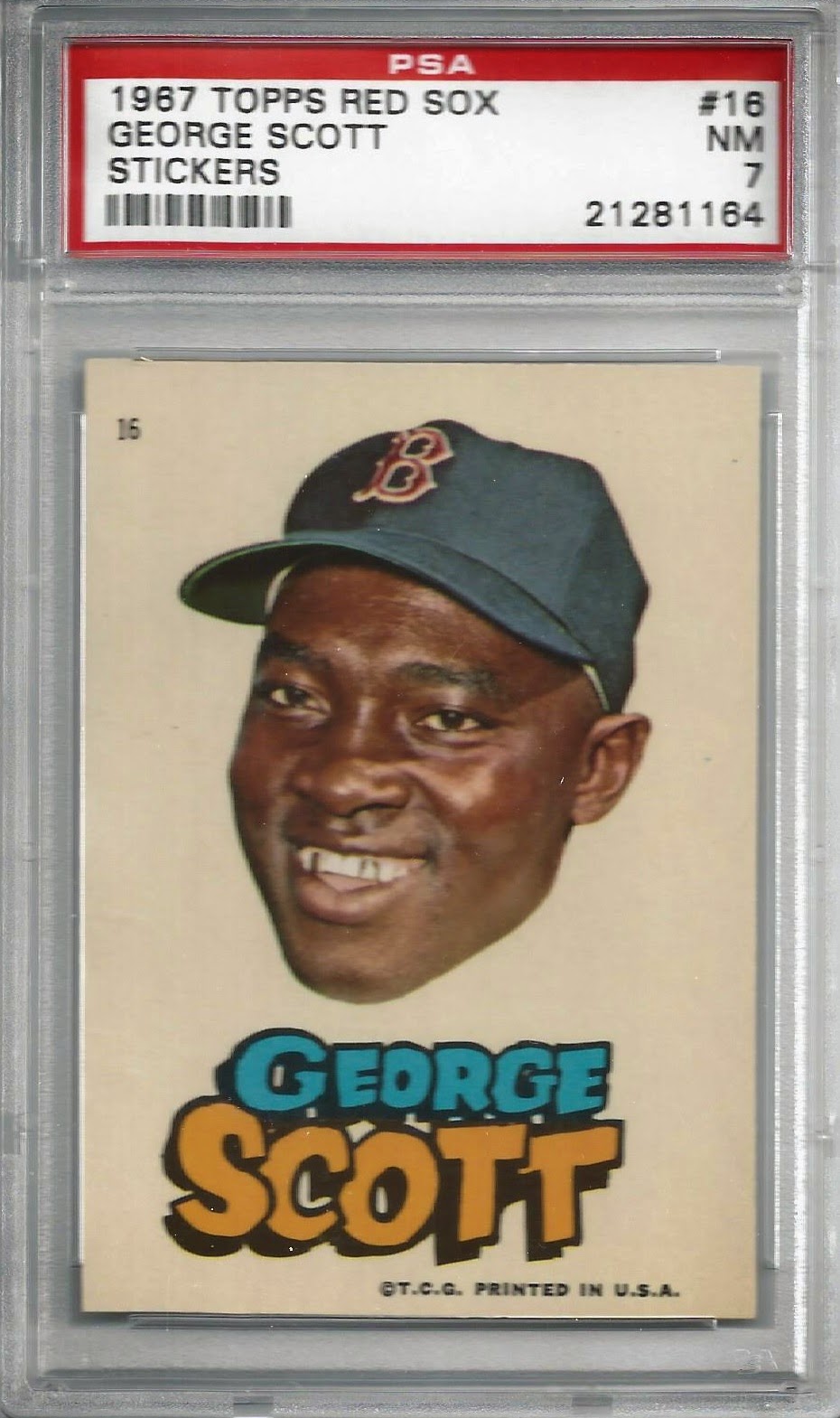 George Scott played a lot of games for Boston in the 9 years (2 different stints) that he was with the team.  He was named an All-Star a few times during his career, and is a member of the Boston Red Sox HOF.  He passed away last year, apparently after a lengthy struggle with diabetes. 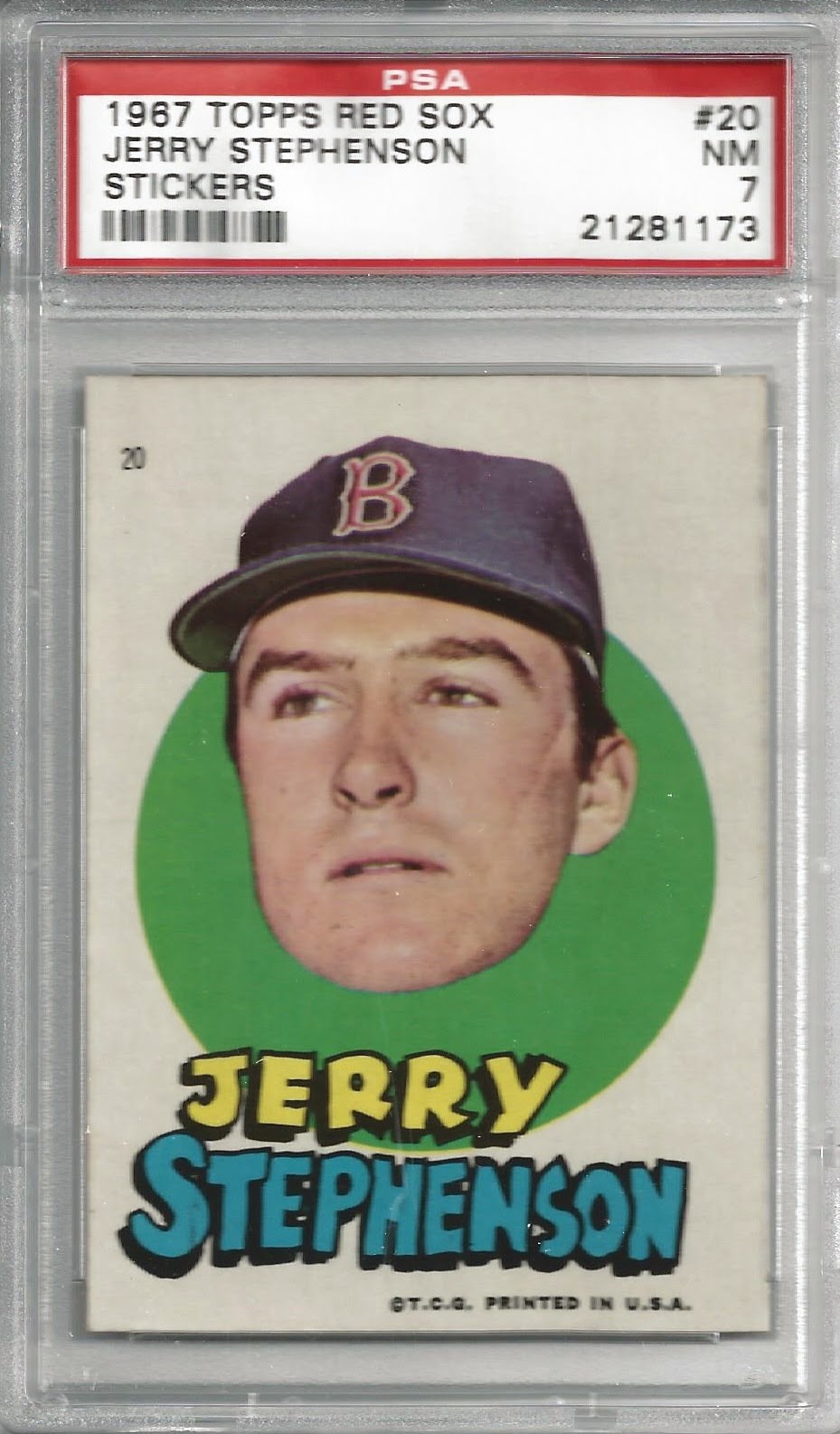 Jerry Stephenson was literally a lifelong baseball guy.  He would play with the Seattle Pilots and the Dodgers after his time in Boston.  When his playing days were done, he served many years (decades!) as a scout for both the Dodgers and the Red Sox.  He finally retired at the end of the 2009 season, and sadly passed away the very next summer at age 66. 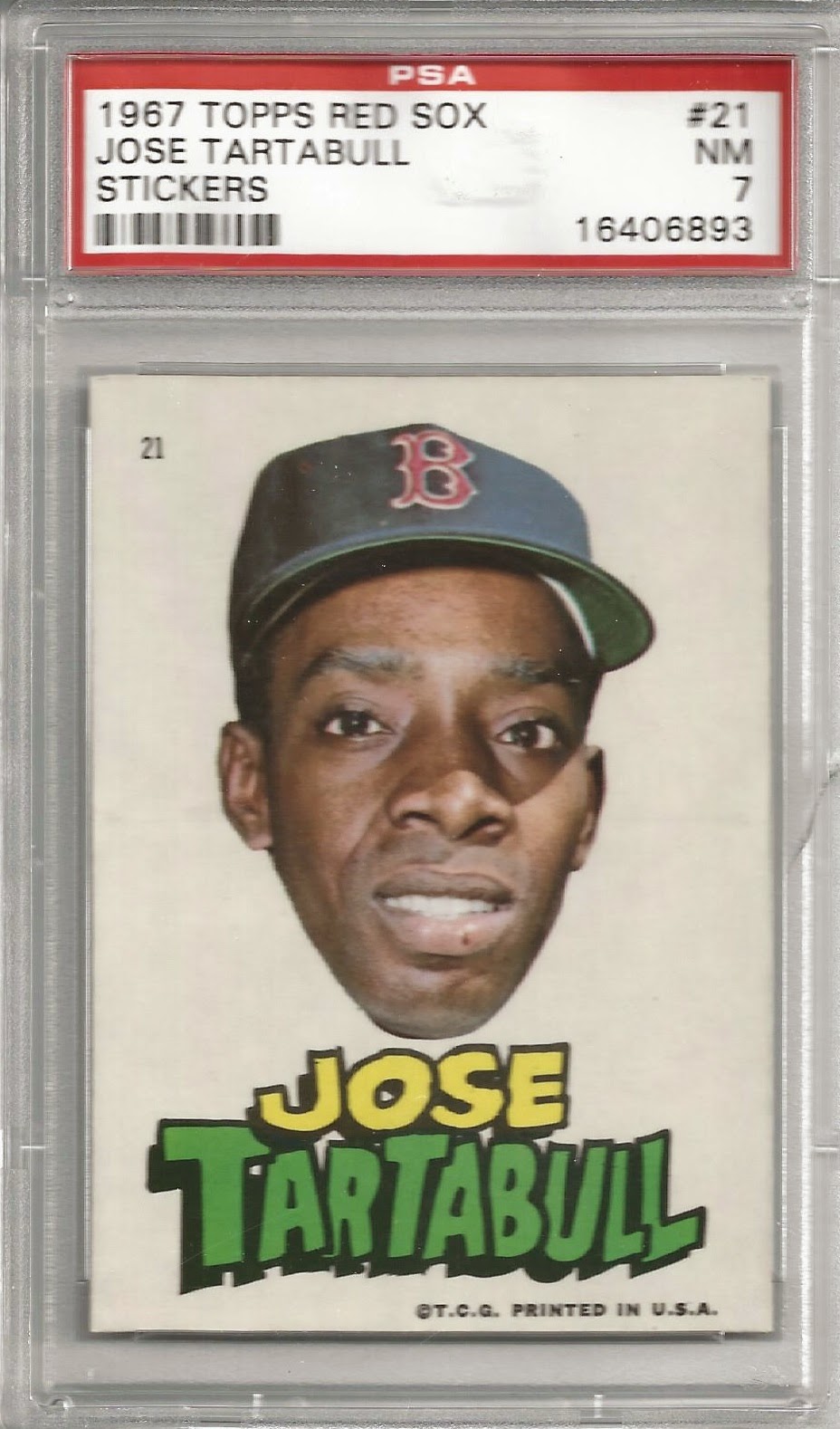 From what I can tell, Jose's career is best remembered for one play late in the 'Impossible Dream' '67 season where he gunned out the potential tying run at home plate late in the game.  Oh, he's also Danny Tartabull's father. 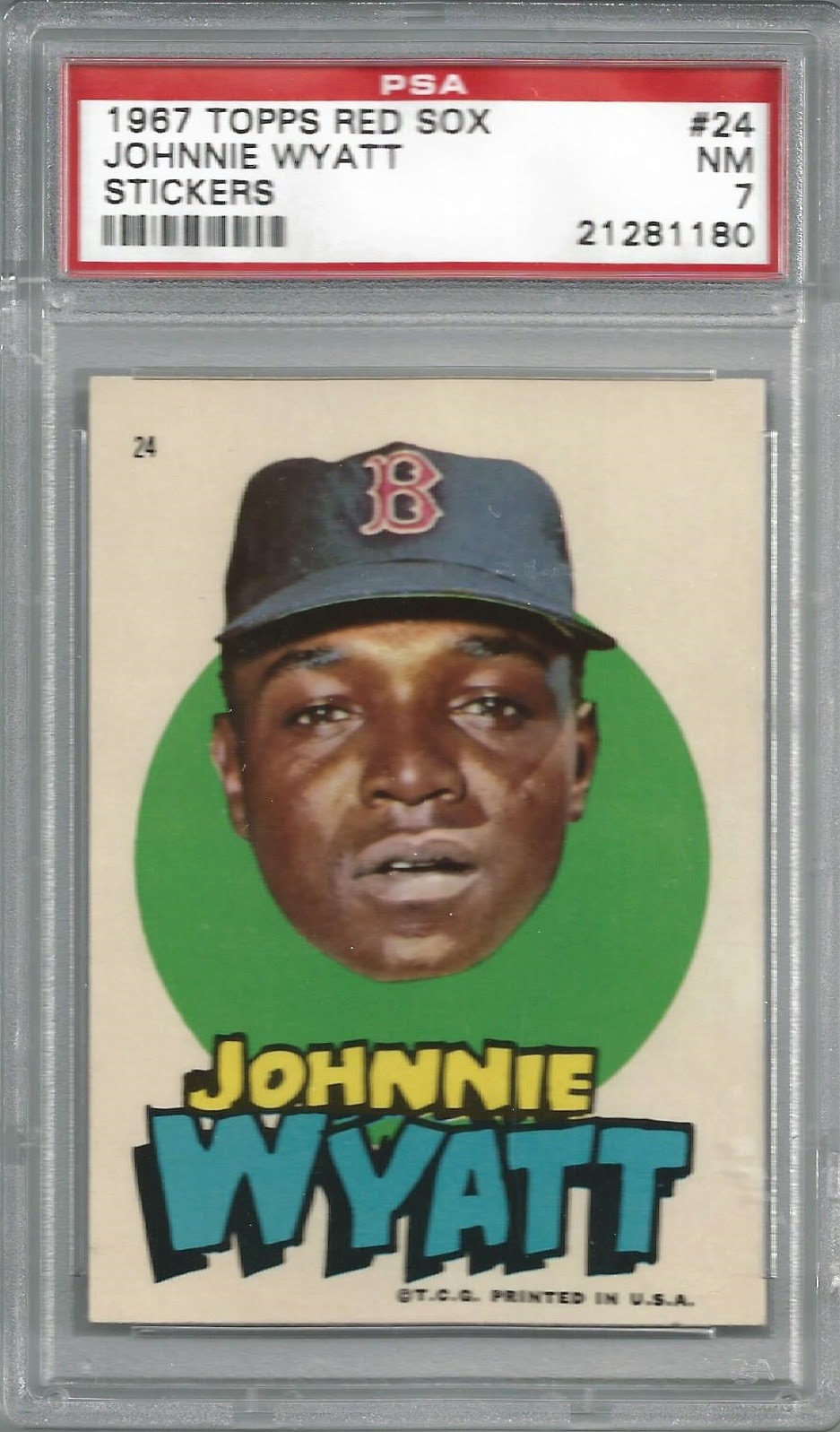 I don't know a whole lot about Wyatt, and from what I've read I don't think he had a particularly notable career at the MLB level.  He was credited with the win in Game 6 of the 1967 World Series, the very last game the Red Sox would win during that amazing season.

I doubt I'll ever even come close to completing this set, but this lot puts me at around the 25% mark with just 33 total stickers on the checklist.  At least I've got some nice examples now for my Red Sox collection, and at what I'd consider a bargain price given the age and condition.
Posted by shoeboxlegends at 8:50 AM

These are terrific items.

I remember the game Jose Santiago pitched. That was a great pennant race, terrible year for the orioles.

Very cool and scary cards! I never understood the floating heads but they are fun to see nonetheless!

I'm a Sox collector myself. I've managed to put two complete sets of the stickers together.