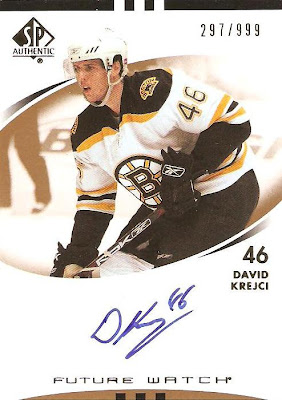 Last night David Krejci scored his first goal of the year for the Boston Bruins. It may have taken him 10 games to light the lamp, but he couldn't have scored his first in much more dramatic fashion. The Bruins trailed 3 - 1 on the road in Ottawa with less than 2 minutes remaining in the game. Tim Thomas was pulled for an extra attacker and the Bruins managed two goals, including Krejci's redirect from a shot at the point which tied the game with just over 20 seconds remaining. They went on to win in the shootout, grabbing a much needed two points on the road.

Since Krejci's goal was such a big one, I've chosen one of the last couple of autographs I haven't yet featured, from 2007-08 SP Authentic. We'll see if the team can carry the momentum into Thursday's showdown with Martin Brodeur and the New Jersey Devils...