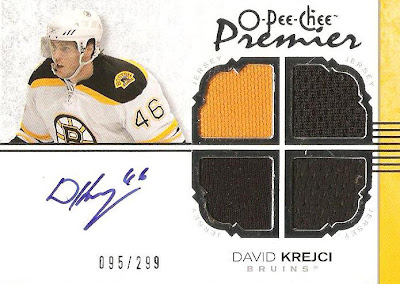 I consider myself a set collector first and foremost. The best part of this hobby for me is finding a set I want to attempt, accumulating and organizing the cards, plugging the last few holes and then displaying the set in a binder. When I collected as a kid though, I focused on players more than anything else. I had that one binder, like most of my friends, that contained just about every card of a star player that I got my hands on.
In my second round of collecting, I've been meaning to settle on a hockey player to collect for quite some time now, and I've decided to collect my favorite active player, David Krejci of the Boston Bruins. My plan is to grow my collection, and reveal one new card each time Krejci registers a goal this season with the Bruins. This is only Krejci's second full season in the league so he doesn't have a ton of cards out there yet, so we'll see if I can outpace his scoring with my acquisition of cards. I've casually picked up a few Krejci cards already over the past couple of years so first here's a list of the cards I've already featured on the blog:
#1 - 2007-08 Upper Deck SPX (Auto/Dual Relic/#'d to 999)
#2 - 2007-08 O-Pee-Chee Premier (Auto/Quad Relic/#'d to 299)
#3 - 2007-08 Upper Deck Ice Fresh Threads (Dual Relic)
#4 - 2008-09 Upper Deck Champs Mini
#5 - 2007-08 In the Game Heroes & Prospects
#6 - 2009-10 Fleer Ultra
Hopefully I'll have a chance to post the next card soon!
Posted by shoeboxlegends at 5:00 PM

A good player to collect. I'm not a Bruins fan but this guy has talent. One of my recent collections focused on Andrei Markov. It's nice to collect a player who only has one RC! :)

Oh, we'll see more than 10 Brian! With his talent it would be an absolute shame if he didn't notch at least 20 goals in a full season. He had 22 last year, and played hurt towards the end of the season. Not to mention he'll probably get more assists than the Canadiens do wins.

Thanks for the comment, TheIronLung. If your blogger ID is based on the Radiohead song then you picked a great song and a great band. Too bad about Markov going down this year...