It's been a couple of months now since I added a card to my 1953 Topps Project, which is my attempt to complete the '53 Topps set in grade PSA 6.  I've still been picking up some cards on occasion, but have been lax about posting them.  I need to get a move on if I want to reach my goal of 65 by year's end.  Today we have the 54th card in my set, Ted Gray of the Detroit Tigers: 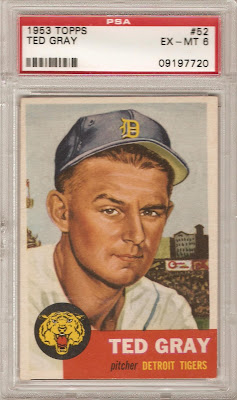 Ted was signed by Detroit as a 17-year-old in 1942.  He made a name for himself pitching with the Navy in the early '40s, racking up insane strikeout numbers.  It seemed he was on track for a promising MLB career, but he never really lived up to the hype once he began seeing steady time with the Tigers in 1948.  He served as a member of the team's starting rotation from 1949 through 1953, but inconsistent play (supposedly caused at least in part by chronic blisters) prevented him from recording any truly spectacular seasons.  In 1950, for example, he recorded 10 wins before the All-Star break, but not a single one after that, finishing the year 10-7.  In his 9 years at the Major League level, he managed to keep his ERA below 4.00 only once. 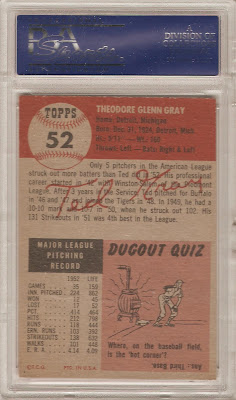 The last year or so of Ted's career was your classic example of teams hoping they could catch lightning in a bottle.  He was traded to the White Sox at the end of the 1954 season, and in 1955 was released by the White Sox, Indians, Yankees and Orioles!  Yup, Ted Gray played for and was released by four separate teams in 1955 alone.  I guess none of them found what they were looking for...

Thanks Michael! Glad somebody else enjoys them. Completing this set is my #1 collecting goal, and has been since I started the blog almost 6 years ago now. It may take me 20 years, and I may never get there at all, but slow and steady wins the race and I'm having fun looking at each individual card anyway...