These past few years I've become completely obsessed with Premier League football.  Every Saturday and Sunday morning (and sometimes into the afternoon), my poor wife has to put up with soccer on the TV.  This season has been particularly enjoyable given that my favorite team is atop the table with just a few weeks to go (and got a tremendous amount of help from last-place Sunderland again today!).

I would love to build a half-way decent Premier League soccer card collection, but there just hasn't been much out there.  I'm collecting the 1960 A & BC Gum set, which features many of the clubs currently playing in the league, but those are extremely difficult to come by and I can go months or longer without seeing one I need.  The majority of recent releases have been sticker sets with corresponding albums, and I'm just not a big sticker guy.  So, you can imagine my excitement when I heard about this: 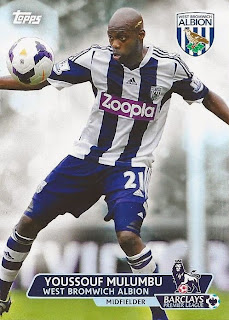 The 2013 Topps English Premier League Gold set is exactly what I've been looking for.  Full-size, standard, licensed trading cards of the Premier League's top players.  Sign me up for a box or two!  Wait, what's that?  $200 a box?  Yes, Topps decided to make this a high end product where it's all about the hits (just 10 packs per box, 5 cards per pack but you get an relic or auto in every pack).  Not only does that drive unopened product way out of my price range, it even makes the lowly base cards tough to come by since you get less than 40 in an entire box.

Luckily I was able to win a decent size chunk of base cards for just $1.04 plus a couple bucks shipping on eBay.  Included in the lot was the man who scored the biggest goal of the season for Liverpool last week: 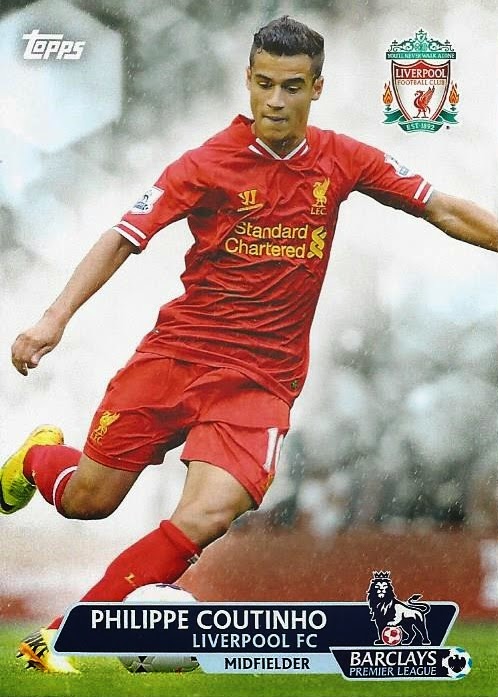 That Liverpool/Manchester City tilt was probably the single best soccer game I've seen since getting into the sport.  It had everything a sports fan could ask for.  Anyone who thinks soccer is too boring or slow should go find a recording of that game and give it a shot.

Back to the cards...I really like these, and if Topps had made this about the base set they would have had a winner in my book.  The card stock is nice and thick, the design along the bottom really fits with the Barclay's branding, and you get a great team crest along the top. 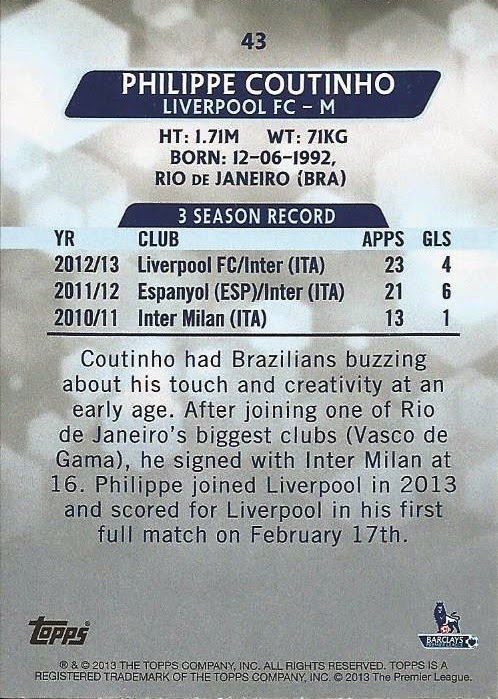 The backs are simple, but contain a good, brief write-up, stats and essentials. 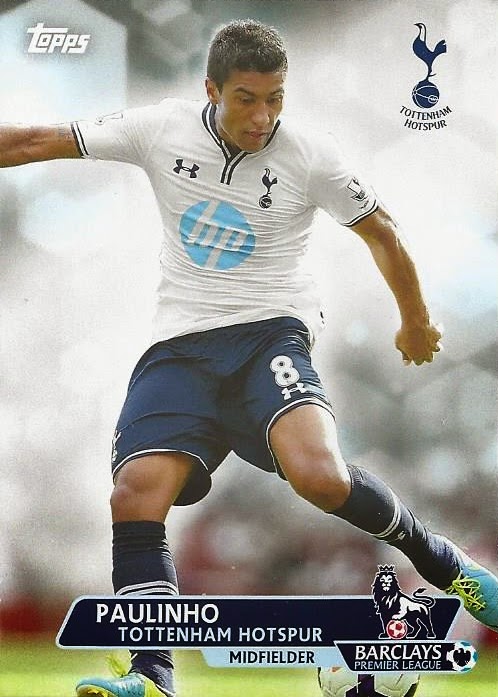 Here's one more from the lot, a player who got on the scoreboard earlier today with the first goal of the match for Tottenham Hotspur against Fulham.

I would love to say that I'm collecting this set, but I don't think I'm going to find another bargain on base cards like I did with my first lot anytime soon.  I would be interested in trading for any singles though.  Anyone out there buy any of this stuff?
Posted by shoeboxlegends at 9:45 PM

Love this post. I've thought about snagging a box, but it's a bit out of my price range. I must admit, I'd be seeking those hits rather than the base cards. I've been waiting for the price to drop. If and when it does- and I get the cash together for a box- you'd be my go to for the base cards!

God, I hate when Topps takes something good and makes it horrible and all about hits. Oh, wait, that's everything.

In seriousness, I'm a Man Utd. Fan. I know -- we should be mortal enemies and all, but when I got into the Premier League 12 years ago, United played the best football. Now, it's probably Liverpool.

All that said, you must not have been a fan back when Liverpool beat AC Milan for the Champions League -- even as a United fan, that game was the craziest, best game I have ever watched!

Nathan, if you ever end up busting a box I'm sure I could find some sweet Pirates card to send your way in return for any base you'd be parting with!

Tony, I've heard quite a bit about that game but didn't get into the sport until a couple of years after that. I'm going to have to dig up a recording somewhere...

I was waiting for that set to come out. I doubt I'll go for a box, but I'll be hunting the base set for sure.

I bought one pack. got a kit card of American keeper Brad Guzan... best card was a Suarez /99.

I don't follow EPL, but those are some nice looking cards. I can understand that the more niche-y, cult-y cards might have to have a higher profit margin to make up for low sales (i.e. WNBA cards), but it would be nice if they sold a factory set or had insert-free packs. It seems to me that the people who buy the high-end packs want the hits and not the base cards, and vice versa for the less-well-off EPL fans.