Now that it's been out for a few weeks, prices on 2014 Topps Stadium Club baseball have cooled as collectors move onto the next hot new item.  I was finally able to land a Red Sox team set for less than $5, which isn't too shabby given that there are an impressive 12 Sox cards on the checklist. 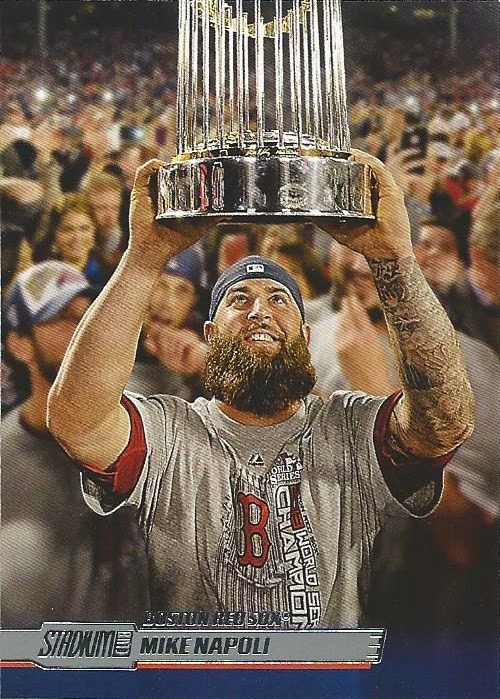 My favorite of the bunch is this fantastic Mike Napoli card.  Stadium Club's hallmark has always been top-notch photography and this year's release is no exception.  That being said, and I could be biased here, I feel as though the Red Sox in particular ended up with some of the nicest photos in this release.

This particular card is one of the nicest new Red Sox cards I've seen in quite some time.  A perfectly framed photograph of Napoli hoisting the World Series Championship trophy minutes after the team won it last year.  The shine of the trophy, the beard, tattoo sleeve, World Series Champs T-Shirt, and sea of fans in the background make for a unique piece of cardboard to say the least. 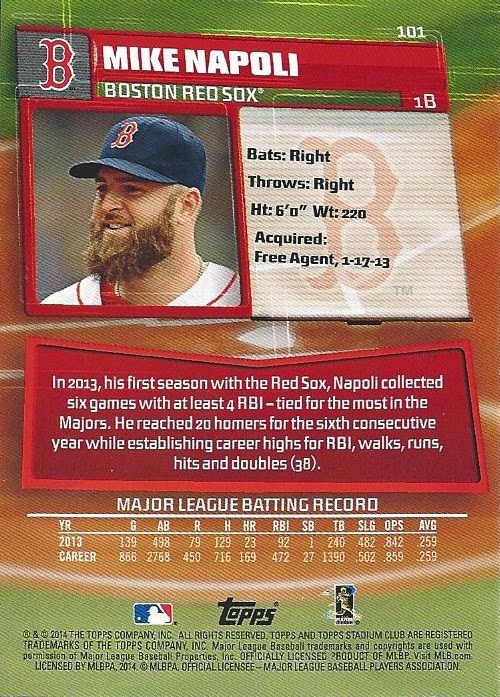 If there's one thing to gripe about it would be the card back.  Not terrible, and certainly colorful, but overall it just seems uninspired after that captivating photograph on the front.

I'll share a few more from this set down the road, and I'm sure you've probably seen them all anyway at this point, but I thought this card was significant enough to merit its own post.
Posted by shoeboxlegends at 10:46 AM

We're on the TSC wavelength. Great minds think alike, as they say.