It may have taken me weeks to post Douglas' prior trade package, but I think I've made up for it with the speed at which I posted this one. These cards arrived in my mailbox just yesterday, all the way from Canada, and here they are for your viewing pleasure... 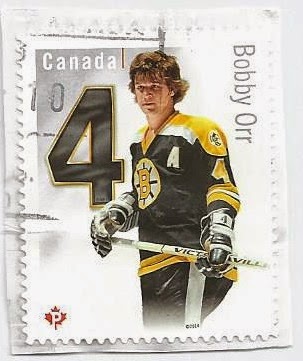 Before we get started though, I'd like to call attention to the fantastic #4 Bobby Orr postage stamp that was used to send these cards down here to the States.  I've seen similar US stamps for baseball HOFers in the past, but never hockey that I can recall.  I'm not a stamp collector by any means, but I thought this was an interesting item, and a thoughtful touch by Douglas.  I've actually cut this off of the envelope and am storing it with the rest of my hockey cards. 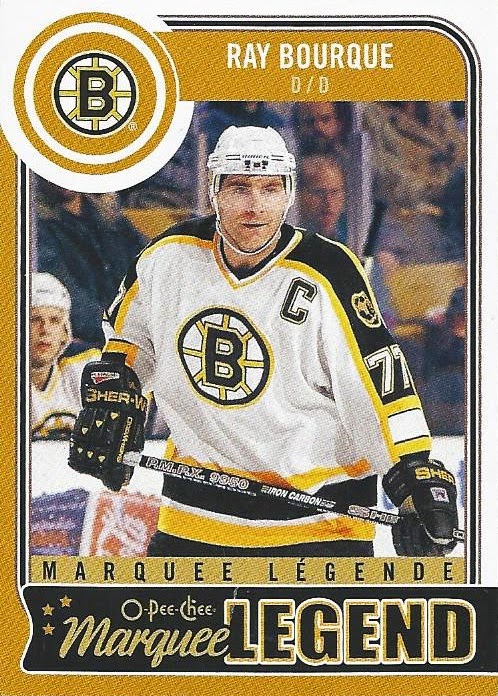 Fitting that the first card that should spill out of the bubble mailer was the second best defenseman ever to wear the Bruins sweater, Mr. Ray Bourque.  This is from the 2014-15 O-Pee-Chee set.  Not only is this my first 2014-15 O-Pee-Chee, it's my first 2014-15 hockey card of any kind.  I just don't keep up with much recent product, but thankfully Douglas always has an eye out for me and keeps me well stocked on newer Whalers (what precious few there are) and B's cards. 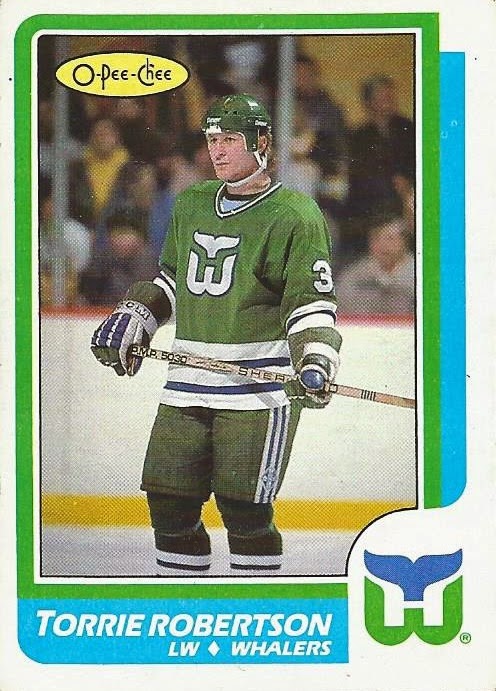 The bulk of the package contained cards off of my Whalers want list on Zistle.  Most of them were from the great '80s, more specifically from two different '80s O-Pee-Chee sets. 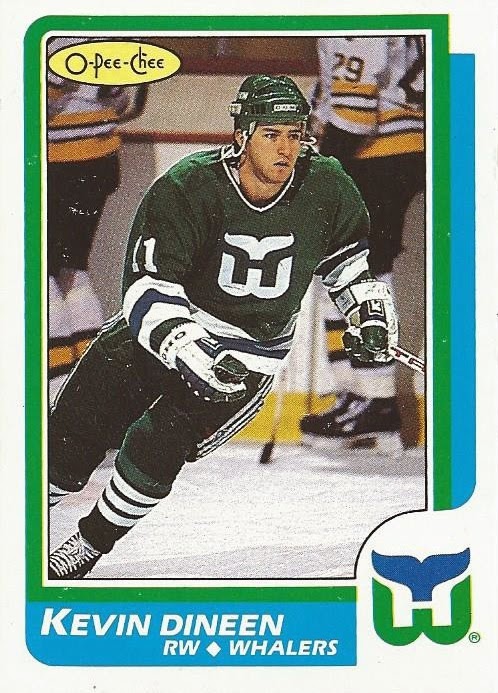 I received 8 new cards towards my '86-87 team set, including this second-year card of Kevin Dineen. 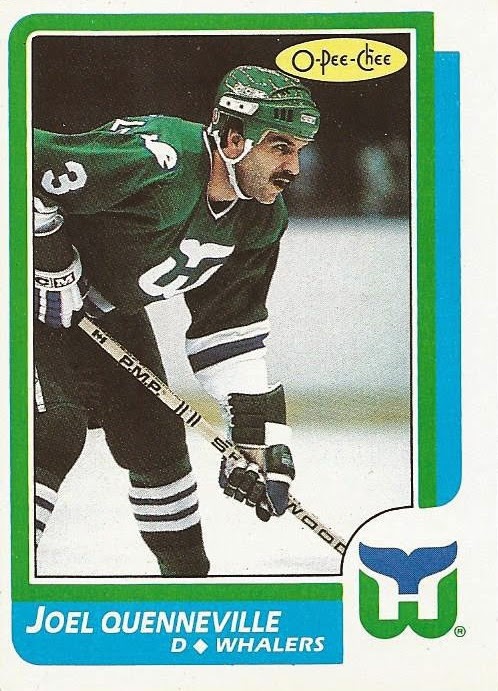 This off-centered Coach Q fits right in with the rest of my OPC from this particular year condition-wise. 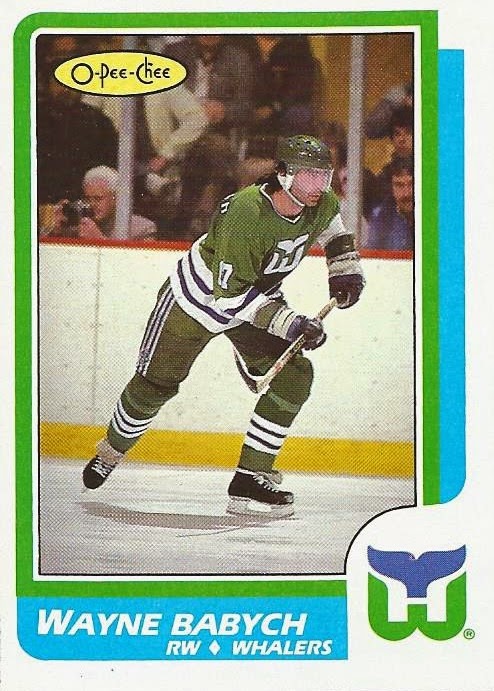 I got both of the Babych brothers from this set in the package.  Here's older brother Wayne, who based on the age of this photograph had to have been one of the early adopters of the helmet shield? 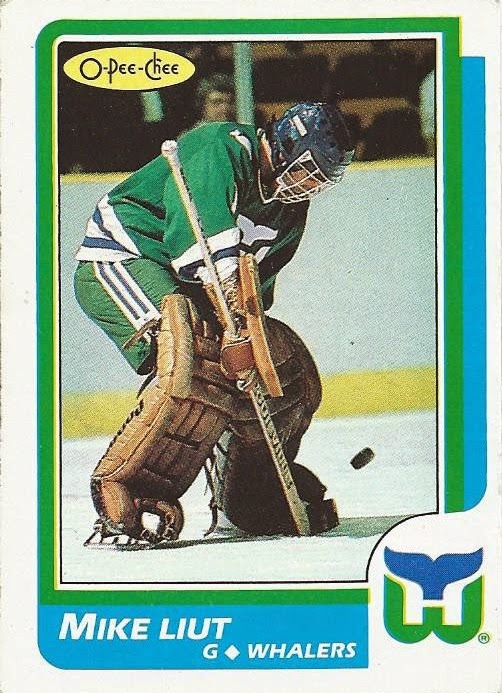 I'm always excited to land a new Mike Liut card.  There just aren't that many left out there that I don't have already. 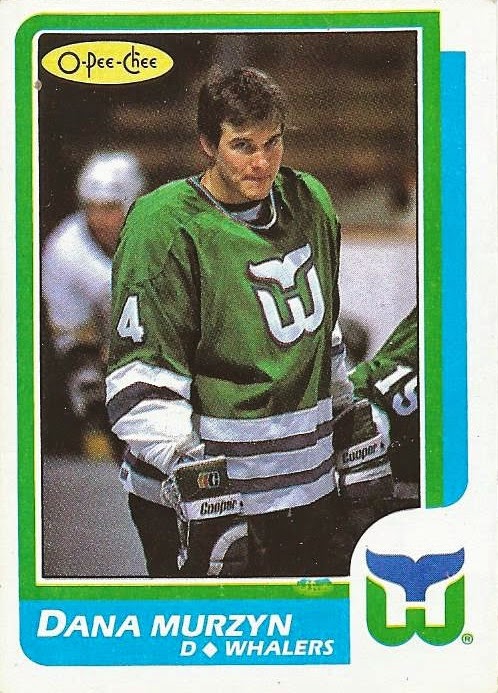 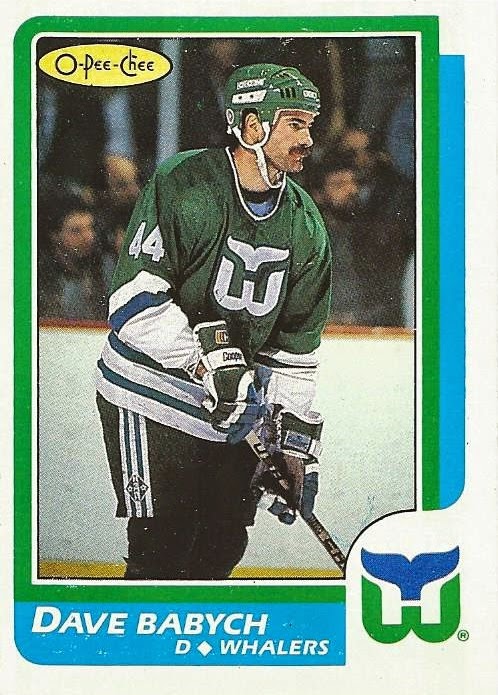 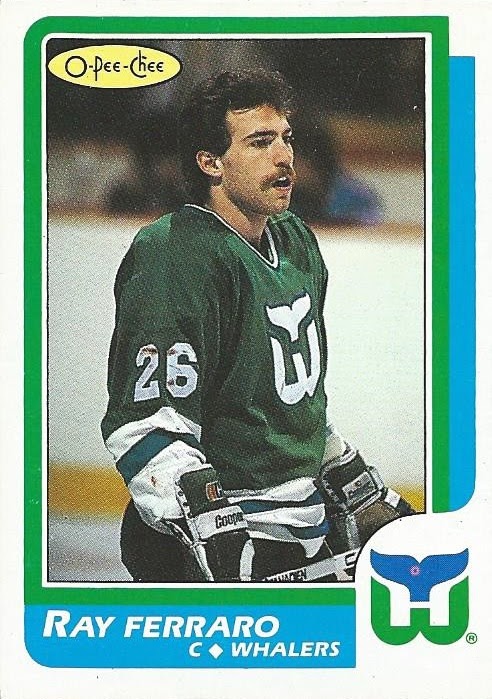 Final card from the '86-87 O-Pee-Chee set, and my favorite of the bunch, a Ray Ferraro rookie!  This is certainly a welcome RC of an under-rated player, and one I was not expecting to receive as a surprise in a trade package. 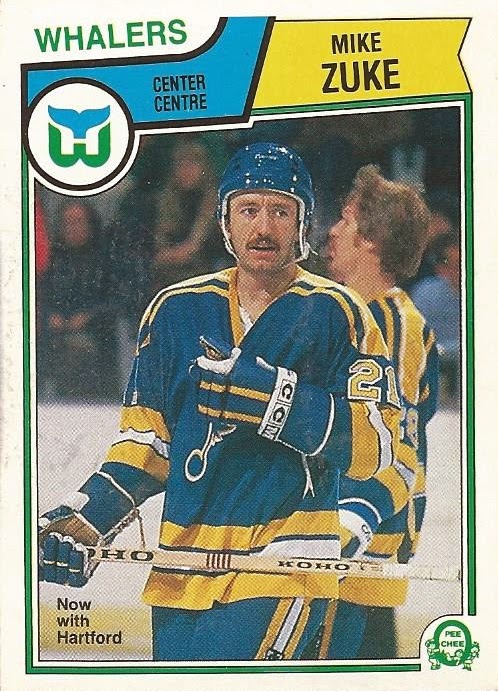 The other Whalers team set that had some damage done to it courtesy of this package was the '83-84 O-Pee-Chee set.  Mike was actually claimed by the Whalers off waivers in early October of 1983, thus the "Now with Hartford" distinction and the St. Louis Blues outfit. 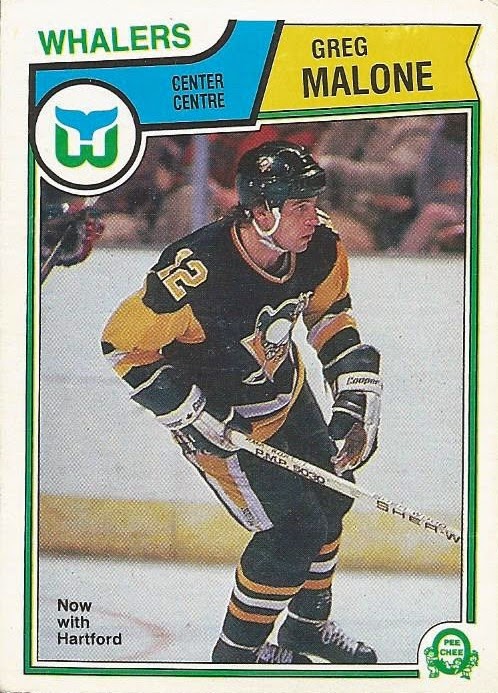 A few days before the Whalers picked Mike Zuke off the scrap heap, they shipped a future 5th round pick to the Pens for Greg Malone... 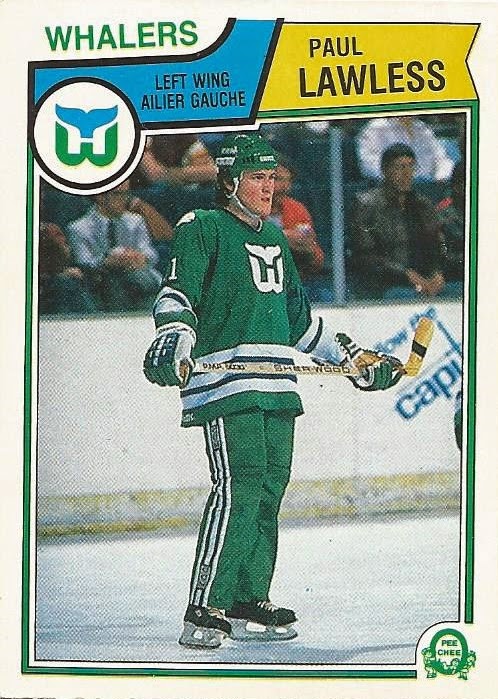 What I love about the '83-84 OPC set as a Whalers collector is that it falls right smack in the "Cooperalls era". 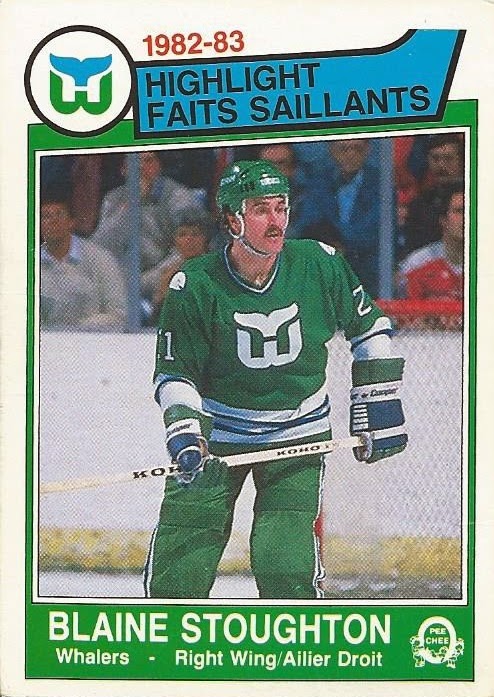 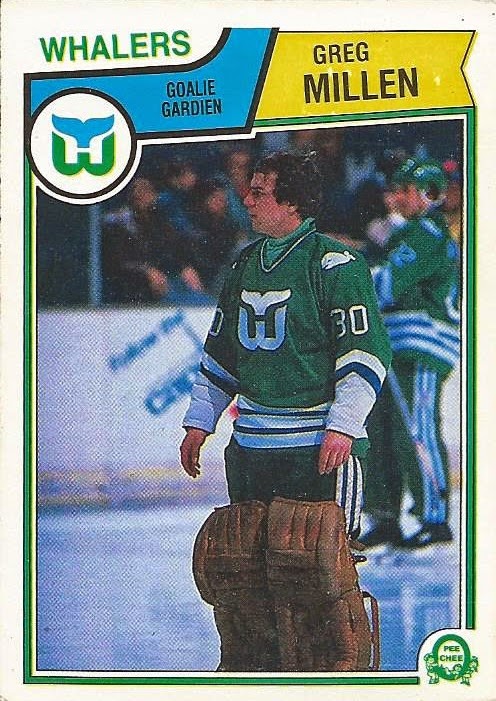 You can tell from the advertisement on the boards that this photograph, like a great majority of the ones featured on NHL trading cards in the '70s and early '80s, was taken in Washington during a game against the Capitals. 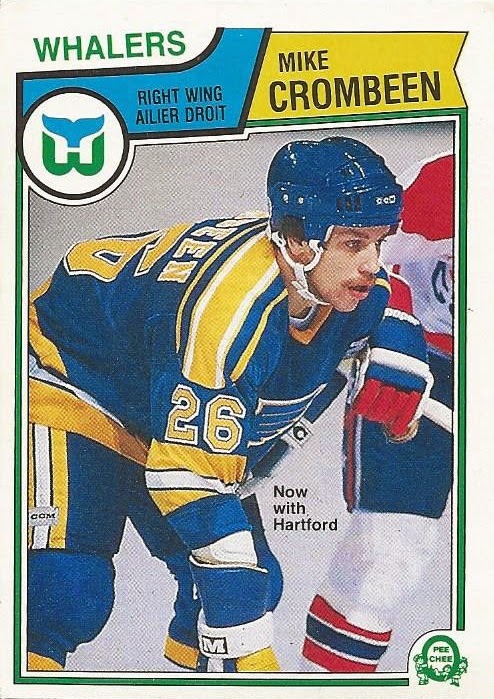 Mike Crombeen here was taken off waivers as well, from the same team and on the same day as Mike Zuke.  Also, another photograph taken against the Caps! 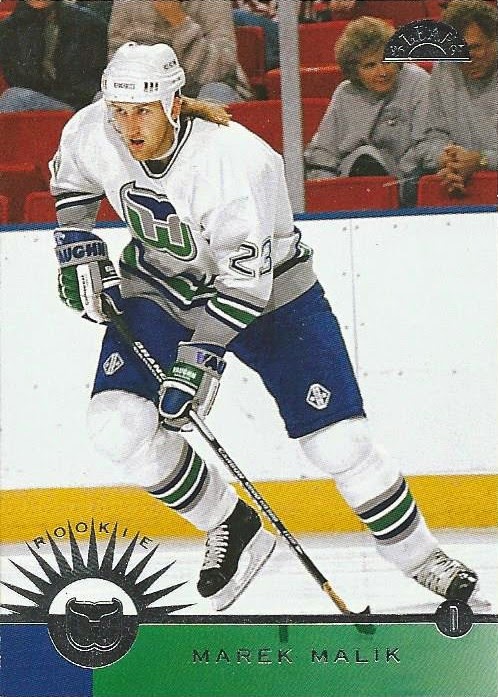 Douglas was kind enough to include this particular card, which I shamelessly asked for when he pulled it from a re-pack recently.  Any card that feature's Marek Malik's impressive mullet and a sweatshirt-wearing grandmother is a winner in my book. 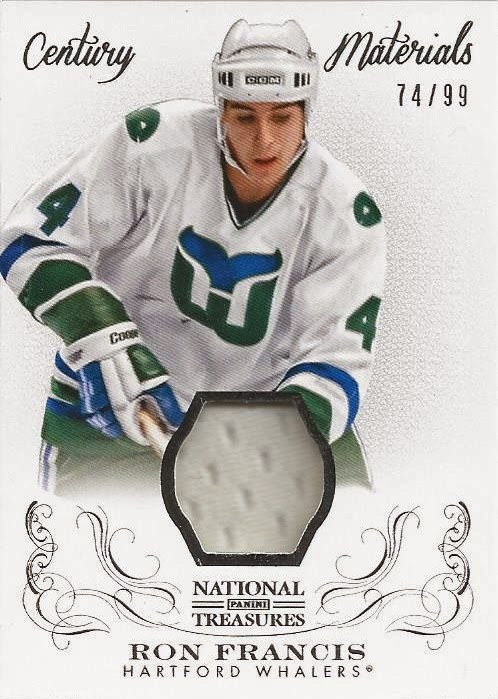 The final card was a complete surprise, and a total beauty from 2013-14 Panini National Treasures.  I believe this was an uber-high-end product that I'd never spend the cash on, but I do have to say this is a very nice piece of cardboard.  It's super thick and really has a classy feel to it.  The swatch is supposedly game-used as well (if we can believe any of that any longer).  A very slick and much appreciated hit for my Whalers collection! 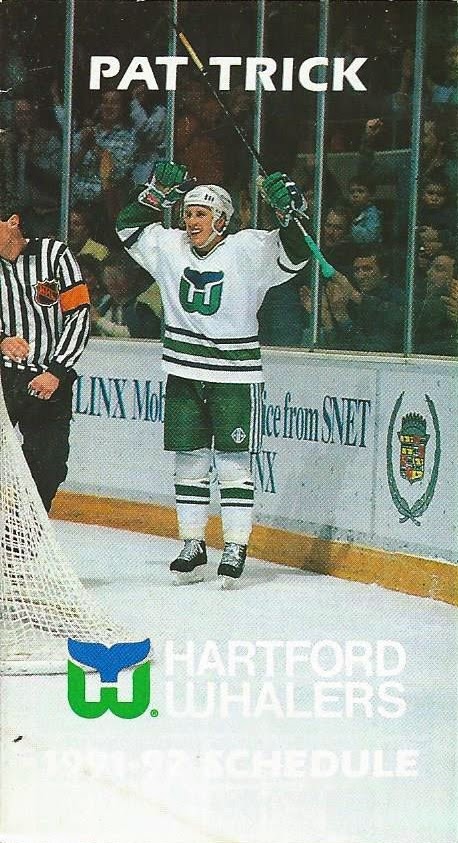 Finally, I saved perhaps my favorite item for last.  Douglas found this awesome 1991-92 Whalers pocket schedule and decided to send it along, and boy am I glad he did.  I love the cheesy "Pat Trick" marketing slogan.  Unfortunately, if my research is correct, Pat Verbeek recorded exactly zero hat tricks in 1991-92.

As always, thanks for the awesome package of cards Douglas!  I will start putting together a return package as soon as I can...
Posted by shoeboxlegends at 8:16 PM

A nice group of cards if I must say. Can't believe how young Francis looks in that pic.

The entire set of six 2014 Canada hockey stamps are freakin' bee-yoo-tee-ful. Makes me want to dig my stamp collector hat out of storage.