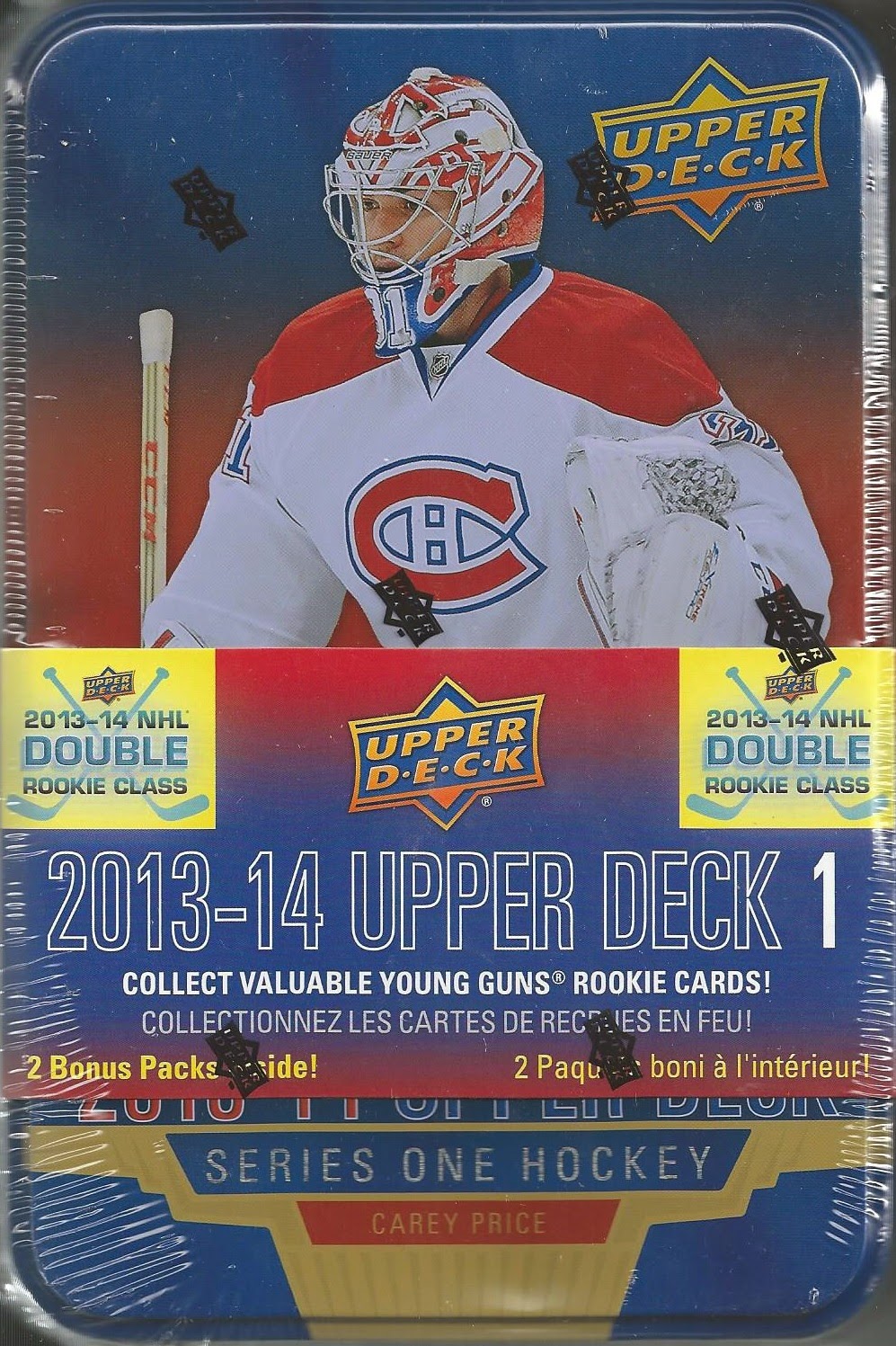 Why not start the new year off on the blog with a pack rip?  Picked up one of these 2013-14 Upper Deck Series 1 tins on the cheap a while ago.  As per usual, the majority of the packs will sit unopened on my shelf for weeks if not months, but I did decide to crack open the first pack. 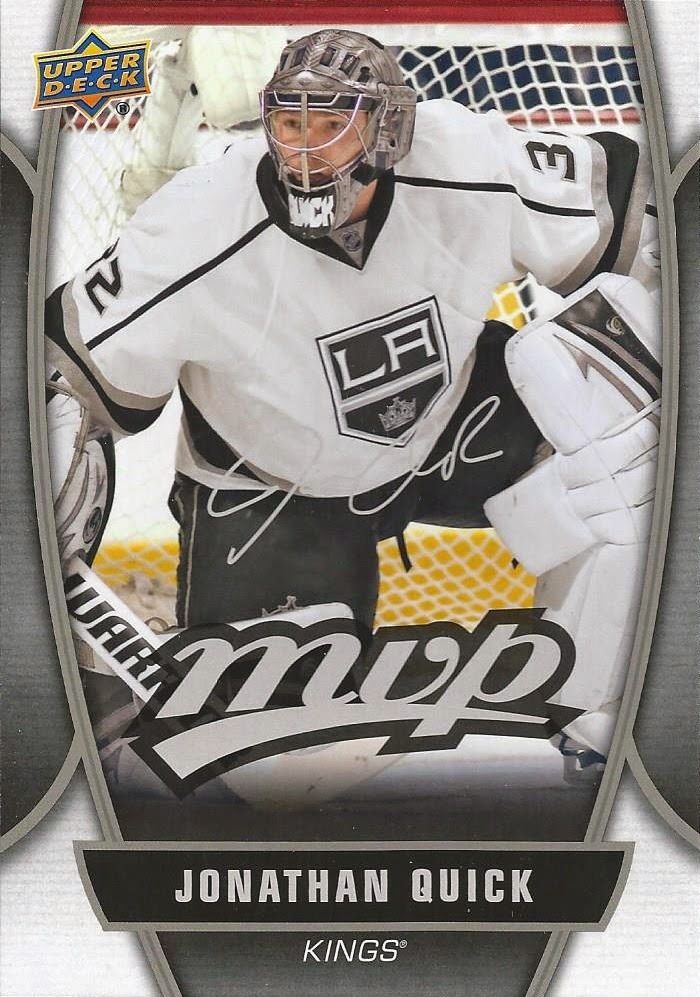 Before we get to that though, apparently each tin contains an over-sized Upper Deck MVP card.  I ended up with Jonathan Quick of the LA Kings. 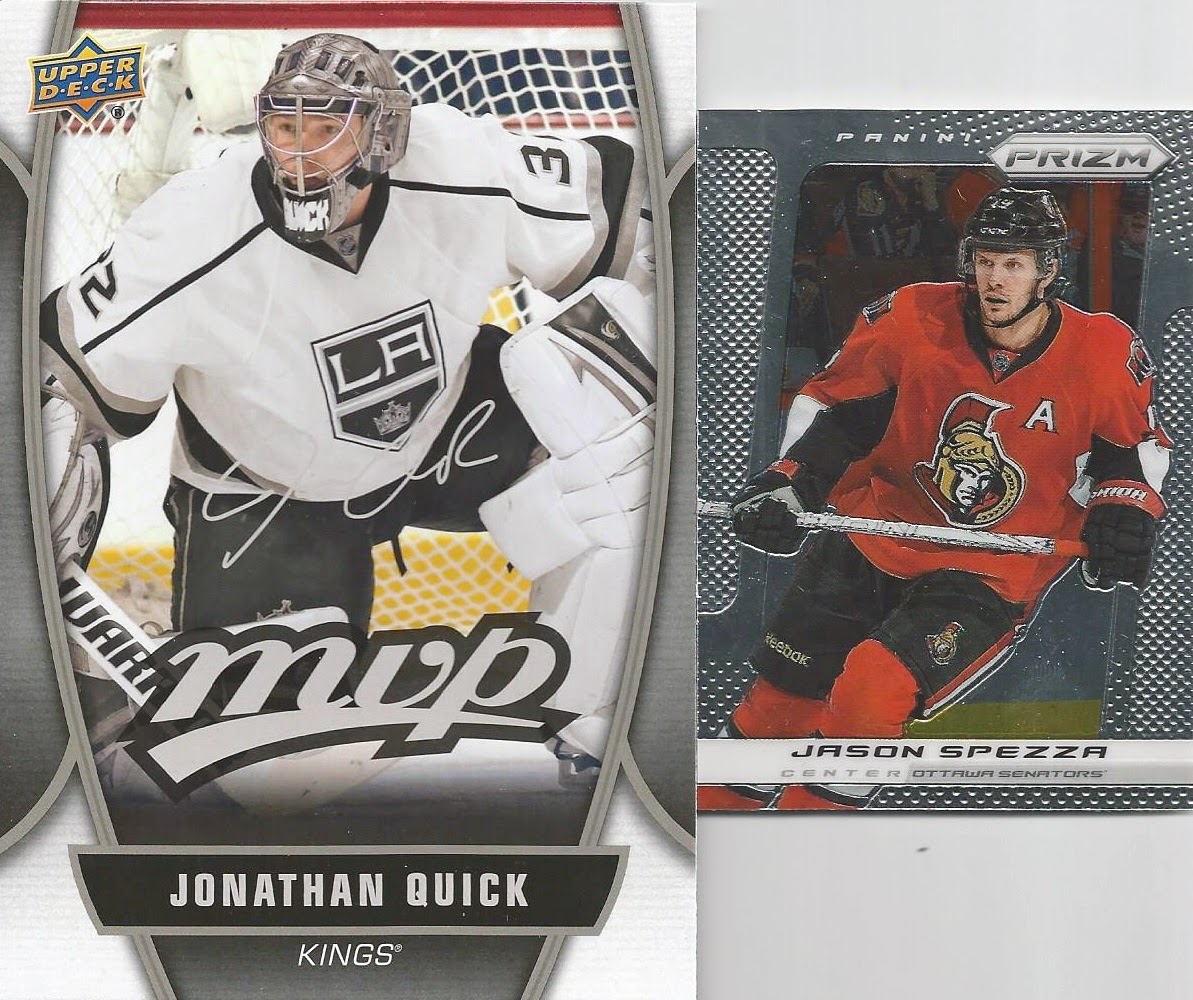 Here it is up against a standard sized modern card to give you an idea of the scale... 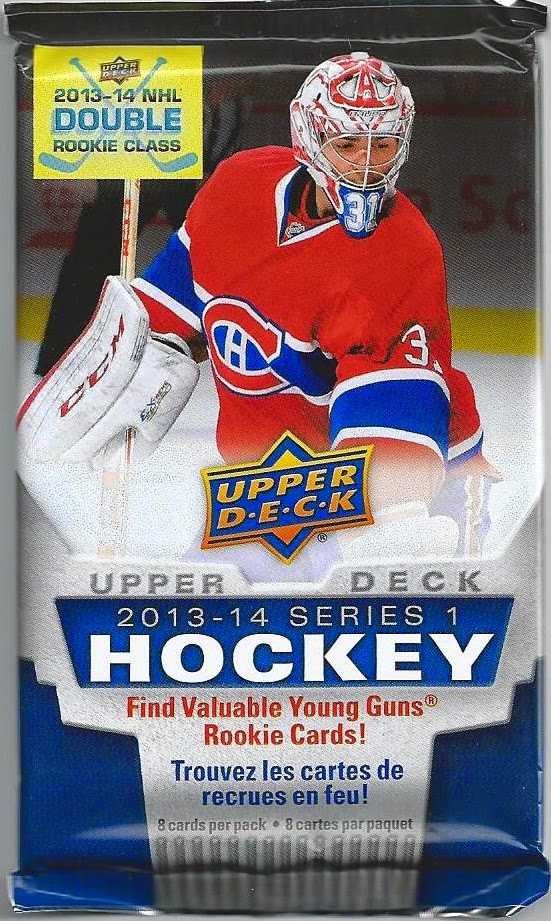 8 cards per pack.  I had not a single card from 2013-14 UD Series 1 before this purchase, so at least I know every one of these cards will be new to my collection... 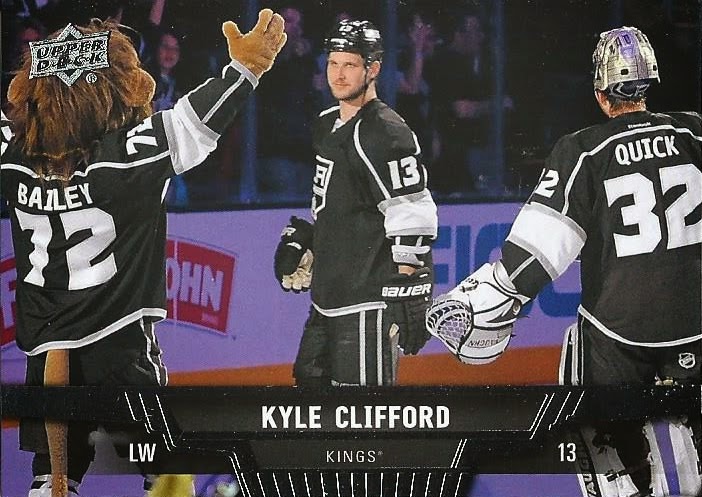 Right out of the gate we've got my favorite card in the entire pack.  This is the second time Kings' mascot Bailey the Lion has made an appearance here in recent weeks. 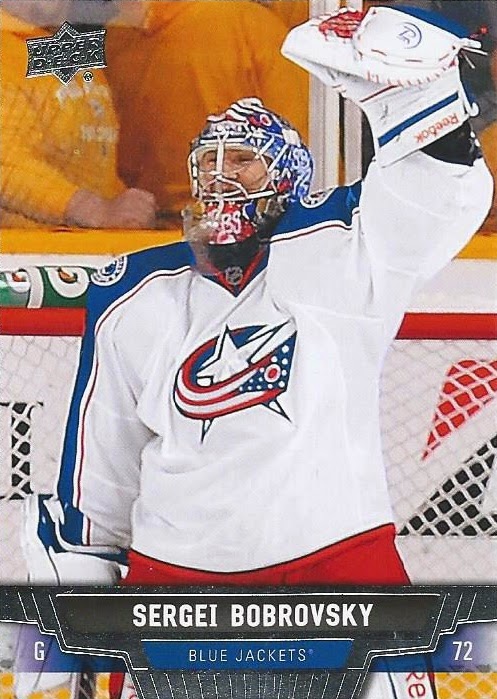 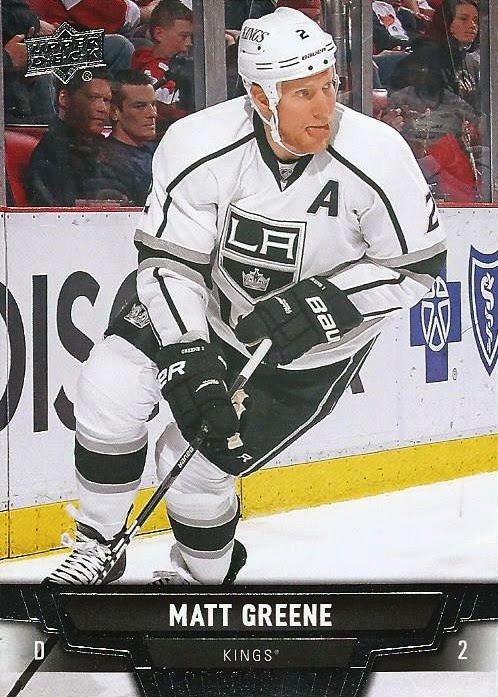 If you count the over-sized Quick, that's 3 Kings out of my first 4 cards from this box. 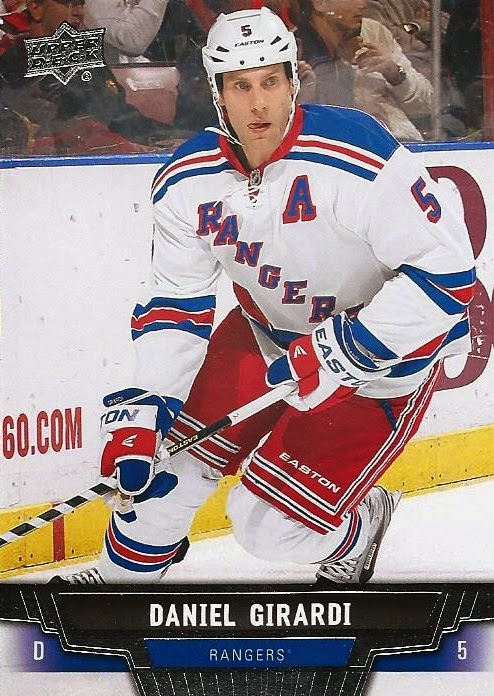 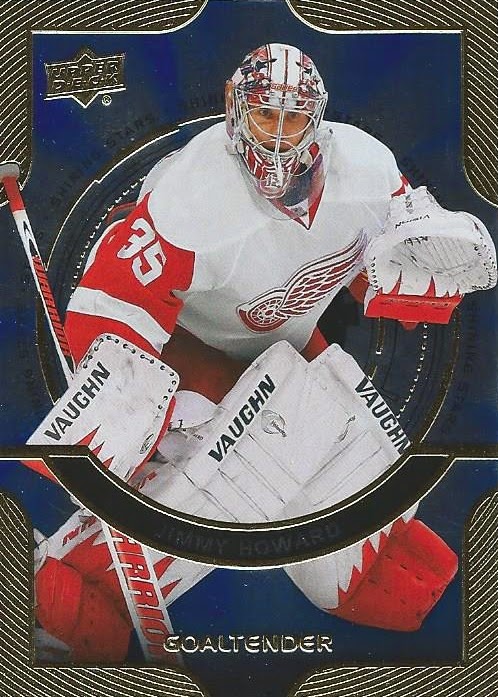 My insert was this Shining Stars Jimmy Howard.  The timing on this was perfect as I've already thrown this into the pile of cards I have building for Mitch to thank him for that killer Gordie Howe autograph he shipped my way a few weeks ago. 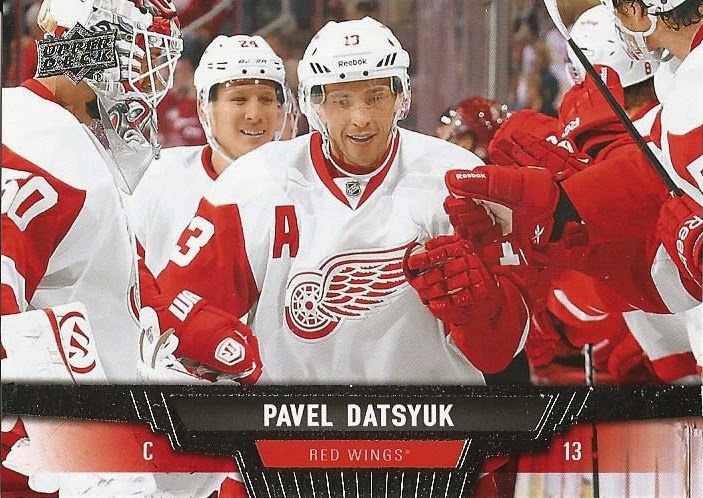 Probably the biggest star in the pack, and a nice celebration shot.  I never get tired of these despite there seeming to be one or two in almost every Upper Deck flagship set nowadays. 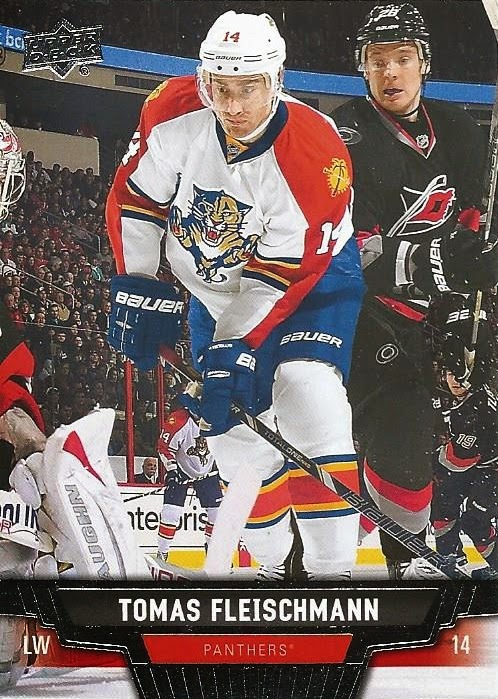 Tomas had a decent season his first year in Florida (27 goals, 34 assists, played in all 82 games).  It's been a struggle since then though, as he's scored less goals than that in the three seasons since combined. 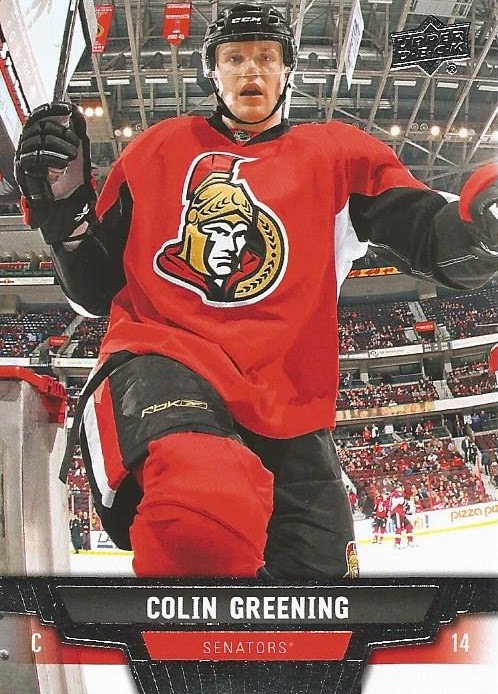 Not exactly a thrilling pack to rip through, but I did get 7 base cards towards hockey's classic yearly set and the Howard insert was a perfect fit to mail out, so it wasn't a total loss.  Besides, like I always say, buyer's remorse is not nearly so painful when you only pay around a buck for a pack...
Posted by shoeboxlegends at 7:37 AM

We all know it's about the 'Guns and I am hopeful for you to land a good one!

Wow, great looking design! And the usual awesome UD photography. Will look forward to future pack rips from this tin...

Those are nice-looking cards, but kind of odd for me... I never went back to the NHL after the 2004-05 lockout, and Quick and Datsyuk are the only players in the entire pack that I'd even heard of. It's especially strange that there's a recent Vezina Trophy winner who's name means nothing to me.

Ditto what Mark said. I currently have in my lap (yes literally) an unopened box of Series 1 from the previous year. I guess it's already a win because it has Captain Serious, Jonathan Toews on the outside.