If I've been slow to respond or get back to you regarding a trade recently, or anything else for that matter, my apologies. I just finished a gigantic project at work that had me working for over 20 straight days so there just hasn't been time for much else.  Things should hopefully be returning to a normal (at least slightly less busy) pace for a while, so I figured why not celebrate with a Signature Sundays post, even if it is tardy.  Better late than never, right? 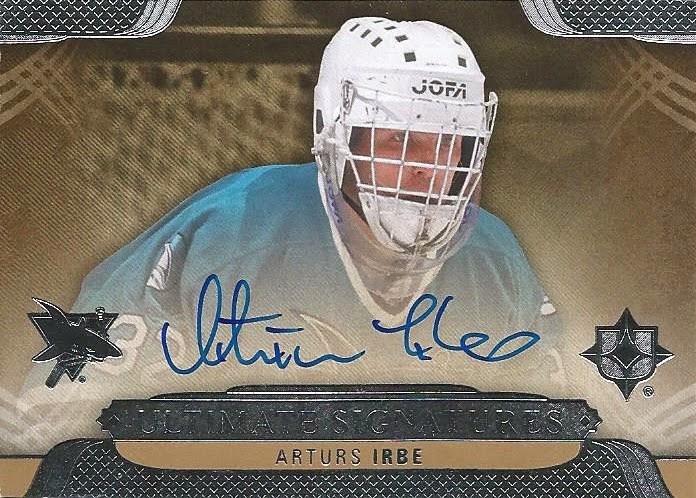 This week's subject is a guy I remember fondly from my childhood collecting days, Arturs Irbe.  If I'm being honest, those memories consist more of snickering at his amusing name or awkward-looking JOFA helmet than anything else.

He had some success at the NHL level though, particularly the 1993-94 season where he propelled the Sharks to their franchise first playoff appearance, where they stunned the top-seeded Detroit Red Wings.  His time in San Jose came to an end shortly after some strange accident where his own dog bit his hand.  I found out the dog was named Rambo, which made me giggle just like that JOFA lid did back in the day.  The comic relief didn't last long, as a couple of sentences later they mentioned that the dog was "destroyed".  Sorry, was the dog an object, or should that say something more along the lines of "killed" or "put down"?

Anyway, when I recently stumbled across this on-card autograph of Irbe it was too good (and too cheap) to pass up.  With a winning bid of $5.51 and free shipping, this is a bargain I'll enjoy for many years to come. 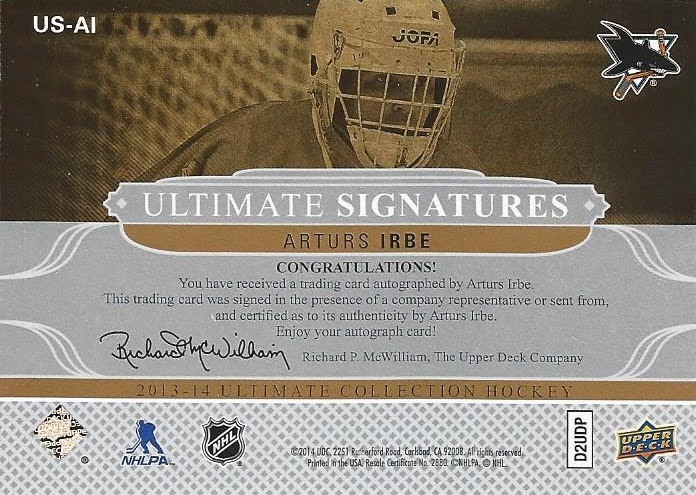 Thanks Marc! I recalled something about an incident with an animal, but didn't know the details about Rambo until researching for this post. Glad you enjoyed!