Two more HOFers this week as I close in on the end of my 2012-13 Panini Classics Signatures autographs. 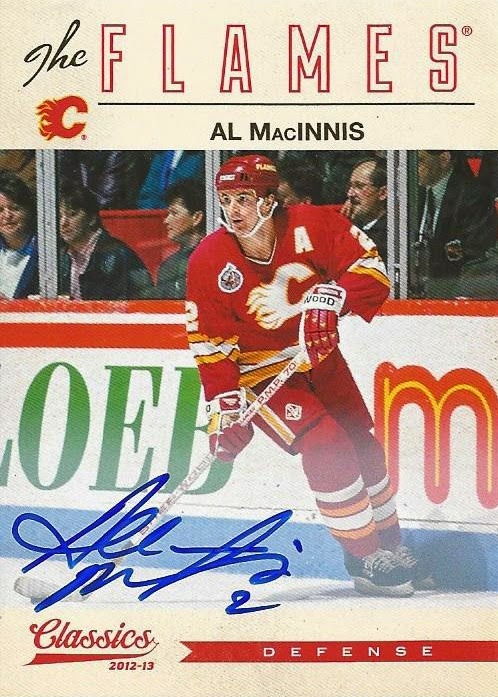 First up is defenseman Al MacInnis.  Al lasted 23 long seasons at the NHL level, all of them spent with the Flames and Blues franchises.  He was an All-Star many times over, as well as a Norris and Conn Smythe Trophy winner.  MacInnis is perhaps best remembered for his vicious slapshot, and he found the net an impressive 340 times during his NHL career (plus another 39 goals in the playoffs!).

When I landed this MacInnis autograph earlier this year, it allowed me to send the one I already had to someone who appreciates Al way more than I do. 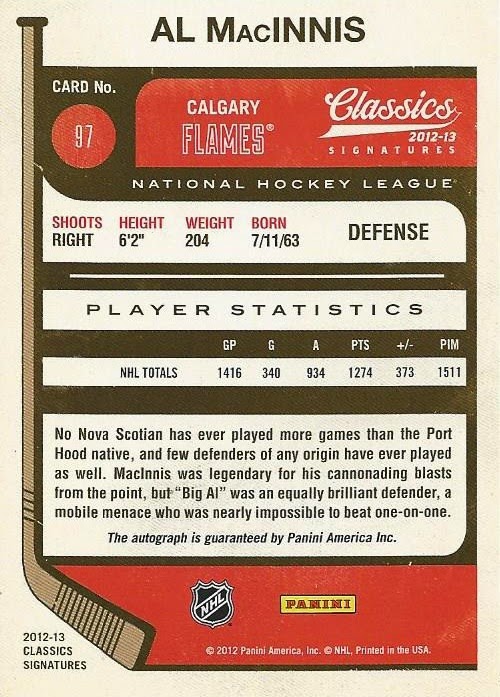 Al's autograph was short printed in this set, and it's not an easy one to come by. 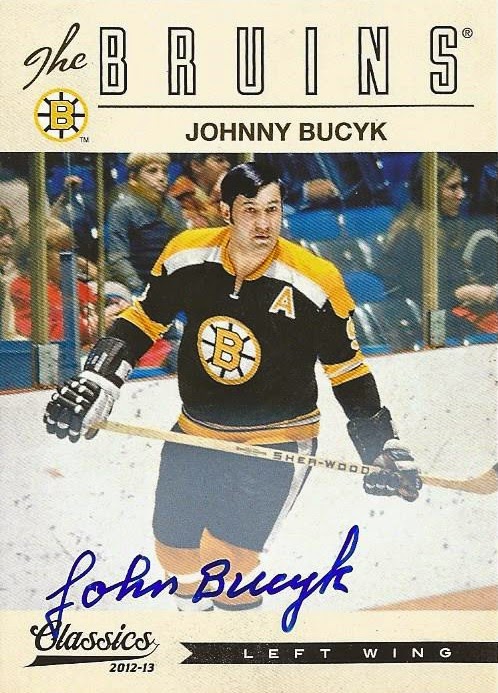 Johnny Bucyk's autograph was a short-print as well, although I've seen significantly more copies of this card up for auction over the past year than I have the MacInnis.  Bucyk was a model of consistency as a player, notching 20 goals or more in an NHL season an impressive 16 times!  When he retired, he was the fourth overall point scorer in league history, and he still ranks at #24 today.

Here's a screenshot I took a year or two ago where local sports station NESN (which broadcasts every B's game) butchered Johnny's name during coverage of a pre-game ceremony: 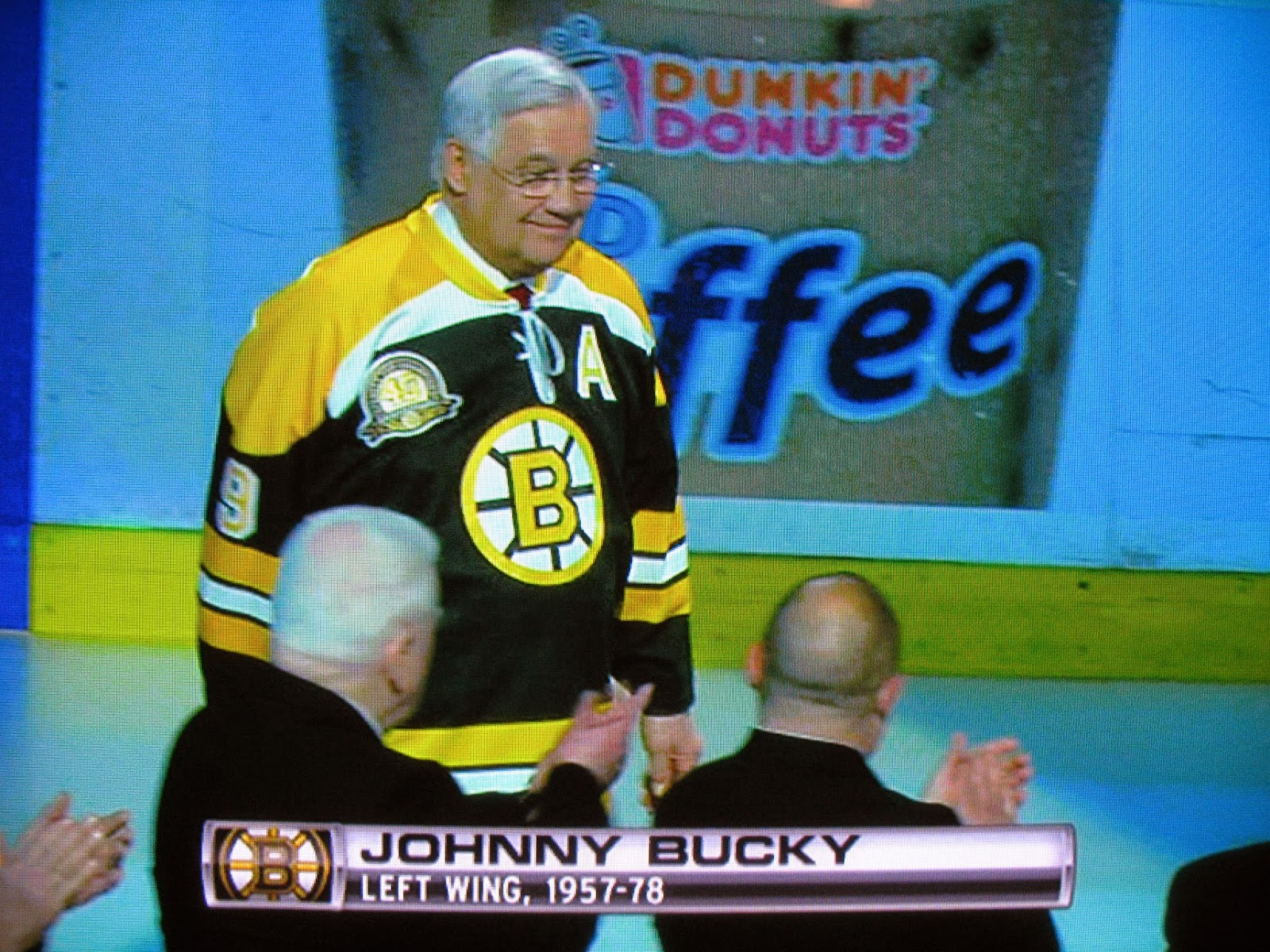 Pretty bad, huh?  One of the most successful Bruins of all time, not sure how that typo gets through... 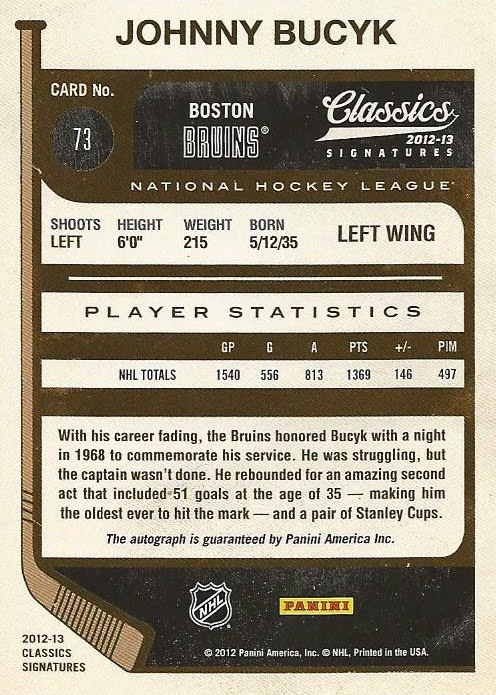 At this point I have just two autographs left to show from this set.  I'll probably post both next weekend so that I can wrap this up and get to some of the many other great autographs that have been backlogged over the past year plus...
Posted by shoeboxlegends at 8:30 AM

Unreal, huh? I guess that's what two Stanley Cups and one of the most successful careers of any Bruins player ever gets you...

You know I "Marc"ed out for those two autographs. Poor Johnny, NESN can't spell his name correctly. Not Native American but a Boston cartoonist thought he was. Hence, the nickname "Chief" Oldest player to score 50+ goals in a season. One of my all time favorite Bruins. Then there's Al. His shot was legendary. Broke a goalies mask, broke a players shin pad and his shin, broke a players cup and "ball" and even once put it through the boards. Now that's a hard shot.