Today's buybacks come courtesy of a large lot of 100+ that I won a few months back on eBay.  I just blindly reached into the box and pulled ten individual cards, let's see how they fare as far as the franken-set goes... 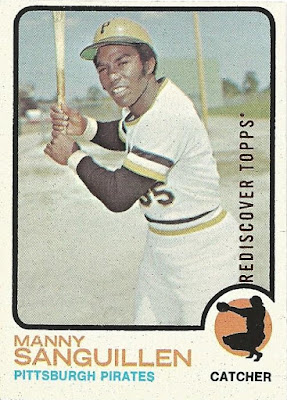 Today's round gets off to a nice start with this '73 Topps Manny Sanguillen.  Manny was coming off of two straight seasons where he was both an All-Star and garnered some MVP votes when this card was released originally.  Bonus points for the appropriately odd '73 Topps background.  Is that a telephone pole behind Manny? 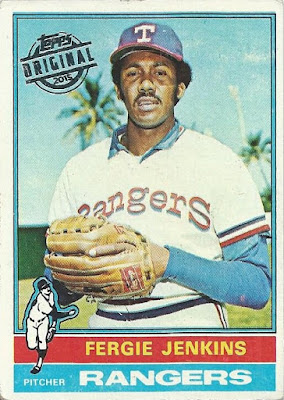 A brutal match-up for Sanguillen as far as the franken-set goes, as this '76 Topps buyback featuring HOFer Fergie Jenkins (and some palm trees!) already occupies that binder slot. 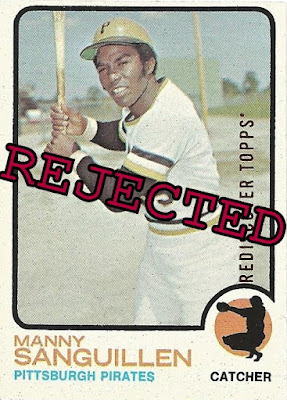 I went with Jenkins, but this one was honestly almost coin flip close. 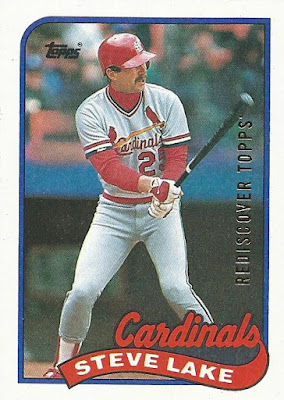 Next up we've got Steve Lake, a backup catcher with a career .237 batting average.  Not exactly stiff competition, but will this one make the binder by default? 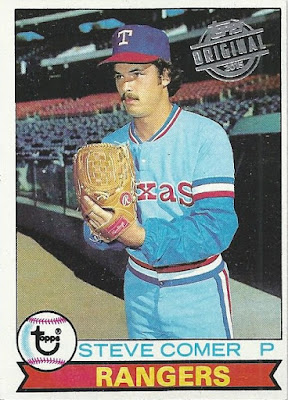 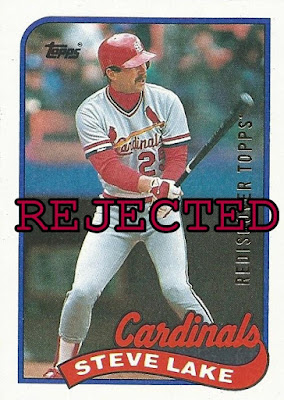 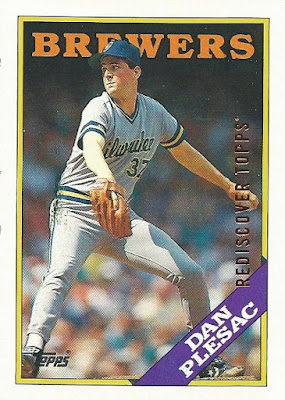 Three cards in and we have a new number for the franken-set!  Plesac put up an impressive 2.41 ERA in 1988 in 50 appearances out of the pen for the Brewers.  He was so effective in the closer role that year that he actually received MVP votes!  A nice buyback for the binder, indeed. 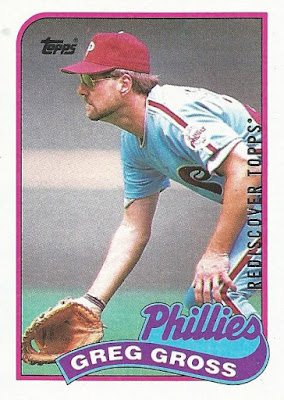 Here's an '89 buyback featuring pinch-hit specialist Greg Gross.  Greg actually played the 1989 season, his final in Major League Baseball, for the Astros after signing with them as a free agent at the outset of the season.  On a side note, the way this photo is framed here drives me nuts. Standing in Greg Gross' path to the franken-set binder is another Philadelphia Phillie, catcher Jim Coker!  Not a very tough call here. 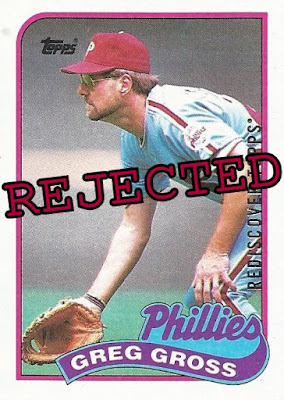 Absolutely no way I can go with late-career Greg Gross over that beautiful '60 Topps buyback. Infielder Donnie Hill actually missed the entire 1989 season after an eye infection he developed in 1987 resulted in a decline in his vision, and in turn his hitting ability, throughout the 1988 season.  He returned to MLB in 1990 though, with his health issues largely behind him. 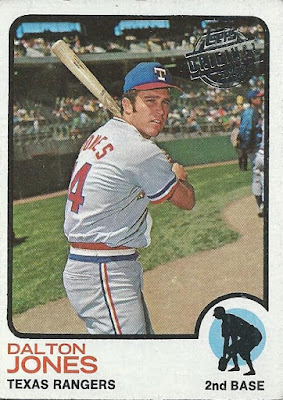 Already had this '73 Dalton Jones in the binder in slot 512. 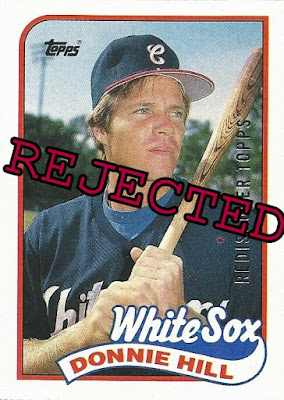 It's hard for me to select a buyback from a year in which the player featured didn't even take a Major League at-bat, so Dalton Jones comes out on top in this match-up. 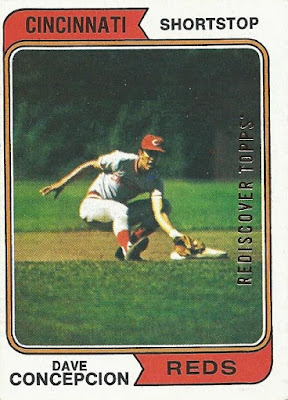 This 1974 Dave Concepcion buyback is undoubtedly the highlight of tonight's grouping.  Dave was a 9x All-Star and won five Gold Gloves during the '70s.  His number is retired by the Cincinnati Reds, and he's a member of their HOF as well.

This one has some extra appeal to be because A) that's a unique and interesting photo and B) the Reds were on the cusp of greatness in 1974, and would win consecutive World Series in '75 and '76.  This one would have probably demolished any competition, but as it stands it gets a free pass into the binder as my first #435 buyback. 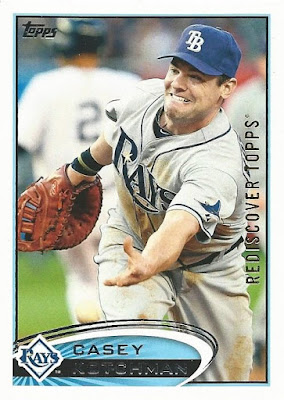 Casey Kotchman has not announced his retirement to my knowledge, and is still "officially" a free agent as far as I know.  I think we can consider his current stats as final though, since he hasn't appeared in a Major League baseball game since 2013.  Fitting that he's shown with the glove on here, as he was known as one of the best fielding first basemen of his day. 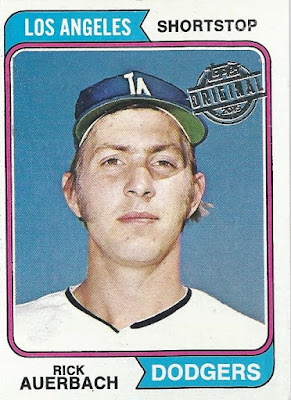 Already had this Rick Auerbach in slot 289 of the binder. 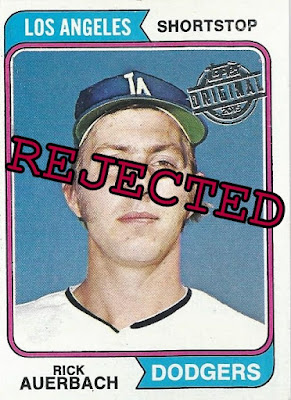 I'm going with Kotchman.  Mainly because I haven't encountered many buybacks as recent as 2012, and since I don't have much of an affinity for either card that's enough to settle the debate. 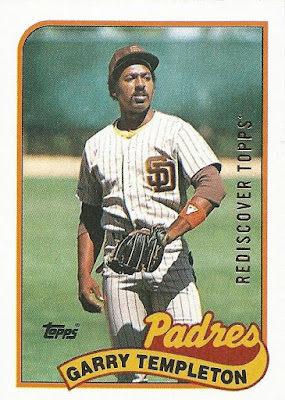 Garry Templeton was a solid player in his day, with multiple All-Star selections to his credit and enshrinement in the Padres HOF.  His most productive days were far behind him by the time Topps printed this card up though. 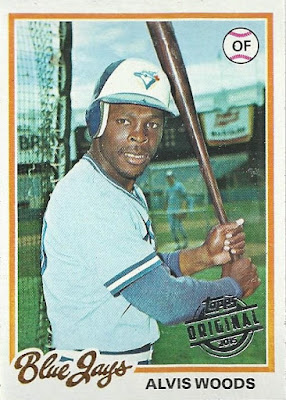 Alvis Woods' '78 release is already holding down slot 121 in the franken-set.  I really like the background of the photograph on this one. 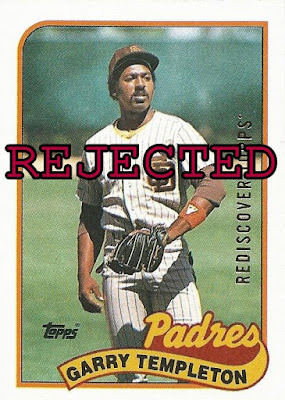 Enough so that I chose to stick with it over the Templeton. 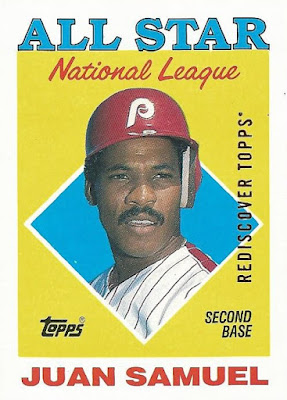 Here's a nice bright one, Juan Samuel's All-Star subset card from 1988 Topps.  Juan enjoyed what was probably his career year in 1987, with 28 home runs, an even 100 RBI, and 15 triples!  He also struck out 162 times though!  I was lacking a #398 buyback, so the franken-set binder just got quite a bit brighter overall. 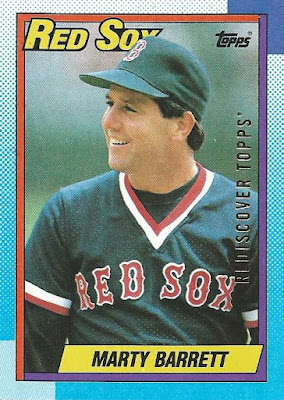 Last card for tonight, and it's nice to finish with a 1990 Topps buyback, and one featuring Red Sox fan favorite Marty Barrett to boot!  I was pleased to find binder slot 355 empty and thus to be able to add Marty to the franken-set.

While I'm not officially chasing a 1990 Topps buyback set at this point, choosing to focus on my franken-set instead, I am up to 41 buybacks from this release now.  Not bad!

Thanks for checking in, the next buyback post in the queue features some that were provided to me by a very generous blogger and trader!

Fantastic stuff. That Fergie Jenkins is an eye catcher for me.

By chance did you pick up any Oscar Gambles in the lot? If so I'd love to maybe work out a trade. Cheers!

What another cool batch. I too enjoyed the Canadian content with Fergie Jenkins!

Whoops! I knew that too, just moving too fast, thanks for the heads up Fuji, I've corrected the post.

Bamlinden, I haven't encountered a Gamble yet but I haven't looked through all my lots either as I typically only view the cards as I pull them. So, even within my own collection I have hundreds of buybacks I've never seen. If I end up with a spare Gamble I'll shoot you a note!

As soon as I saw the 74 Concepcion I thought if that doesn't make the franken-set I'll be shocked. That's got to be one of your nicer buybacks.

I knew Dan Plesac was a decent-to-good reliever back in the day but I didn't know he was good enough to earn MVP votes.