A Pair of PWEs from Longtime Friends

I've got a pair of PWE trades to share with you on this sunny Sunday, both of which actually arrived a few weeks back now. 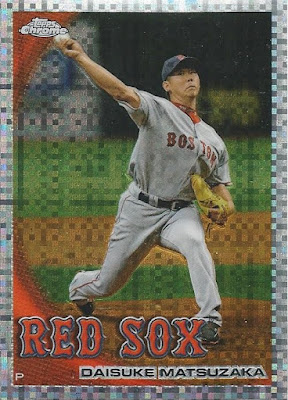 First up is longtime friend of the blog Mark Kaz.  Mark isn't keeping his own blog any longer, but he's still collecting away and accumulating as many Mets cards as he can get his hands on.  We've been exchanging cards for literally years now, and his latest envelope certainly did not disappoint!

We start off with a couple of starting pitchers from the past with a nice X-Fractor of Dice-K... 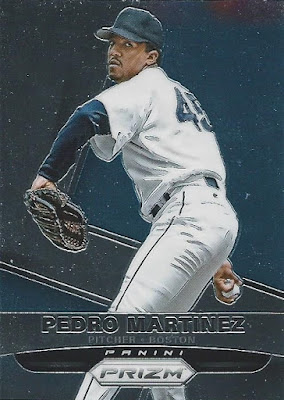 ...and a logo-less, yet still very shiny, card of the great Pedro Martinez! 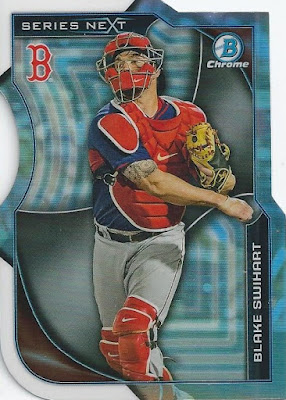 How about a crazily die-cut insert of Blake Swihart from Bowman Chrome.  Blake saw his playing time decrease markedly in 2016, and this year he never even made the big league roster.  Will we ever see him in a Red Sox uniform again?  Who knows, but I like this busy insert nonetheless. 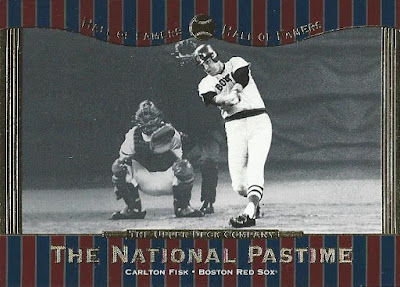 Here's a nice Pudge from the 2001 Upper Deck Hall of Famers set.  We've seen this photo on quite a few different Fisk cards over the years, but to me it never gets old. 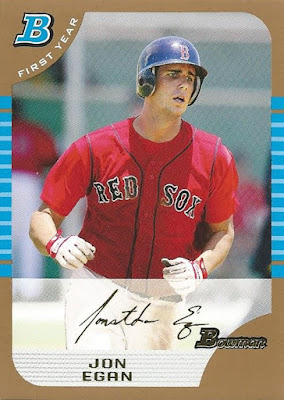 Jon Egan was a "can't miss" prospect with home run power in the mid '00s.  Unfortunately he did miss, and was out of baseball after just a few seasons of minor league ball.  Mark appears to be slowly turning me into an Egan super-collector, as he sent along the base version of this Bowman card a while back, and now the Gold parallel to accompany it! 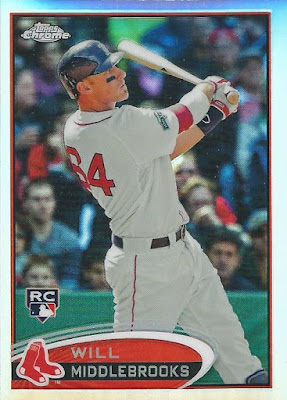 Ah, Will Middlebrooks, what could have been!  Will clubbed 32 home runs in his first 169 games with Boston over 2012 and 2013.  He hit just 11 combined from 2014 through 2016 with three different teams though, as his batting average all out plummeted.  He's likely played his last Major League game at this point.  A nice refractor here of his Topps Chrome RC. 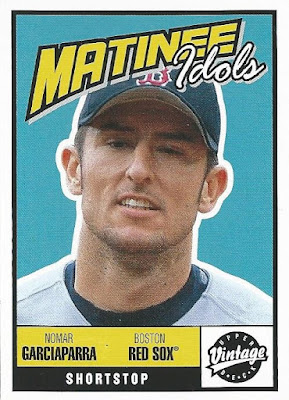 Of course we have a new Nomar card.  Without the facts to back this up, I'd have to guess that Nomar is right up there with David Ortiz in terms of the sheer number of Red Sox cards produced featuring his likeness.  I don't mind at all though given that Garciaparra was my favorite player when I was at a very impressionable age as a baseball fan. 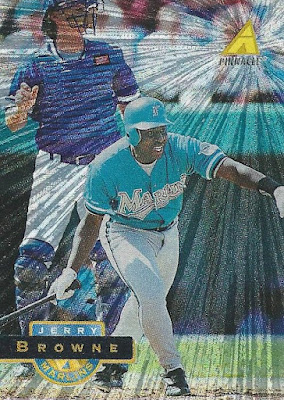 Mark knows my collecting interests well, as illustrated by the two non-Red Sox cards in the envelope.  First, a card from my absolute favorite parallel set of the '90s, 1994 Pinnacle Museum Collection.  Mark my words, someday I will collect this entire set! 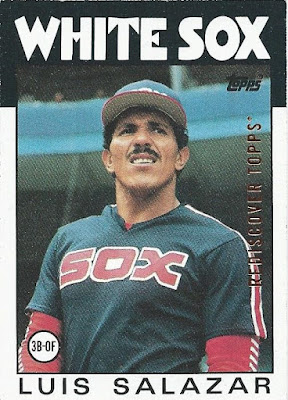 Lastly, Mark was kind enough to include a 2017 Rediscover Topps buyback.  Will Luis Salazar make the franken-set in slot #103?  Judging by the photograph, he doesn't look too confident. 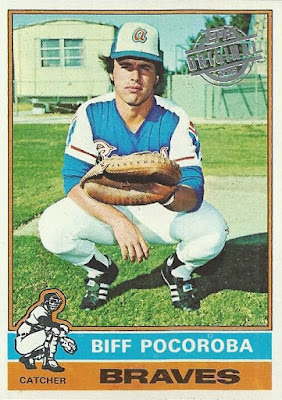 Biff Pocoroba (and a random trailer!) is already in slot 103 though. 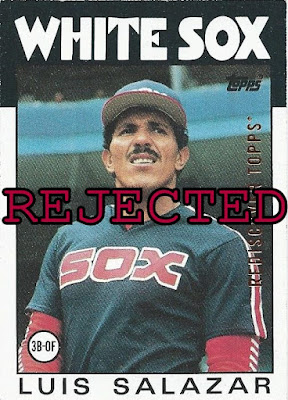 I feel like I've been saying this a lot lately when it comes to the franken-set, but the background made the difference here.

Thanks for the killer PWE Mark!  Sorry it took me so long to get it posted.  I'm pleased to report that a return envelope is headed your way as of yesterday's mail pick-up! 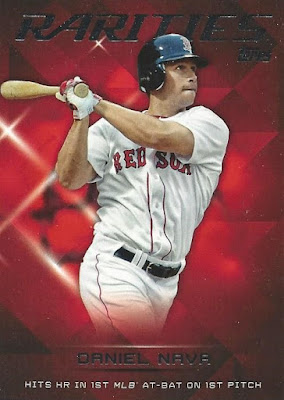 The other envelope I have to show off today is from Brian of Highly Subjective and Completely Arbitrary.  It had been some time since Brian and I exchanged any cardboard, so I was surprised and excited to find this waiting in my mailbox just before I left for Portugal earlier this summer.

Brian started things off with a couple of very red Red Sox cards too.  From 2015 Topps Update, a Daniel Nava Rarities insert... 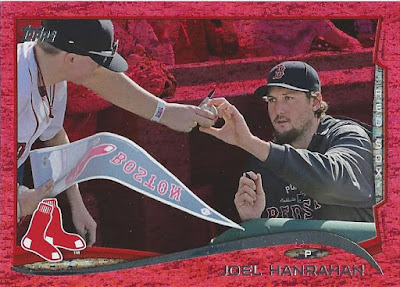 ...and from 2014 Topps, a nice Red Foil parallel featuring Joel Hanrahan signing for the fans.  Joel never pitched in 2014, or any season thereafter.  Turns out his 9 appearances with Boston in 2013 were the final of his MLB career. 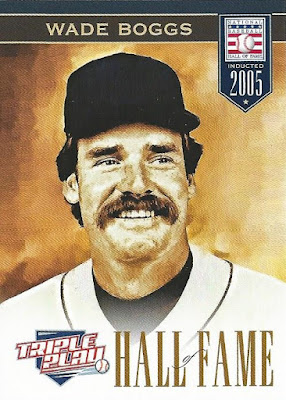 I'm normally not much of a fan of the Triple Play releases, but the Hall of Fame subset at the end of the 2012 release doesn't look too bad. 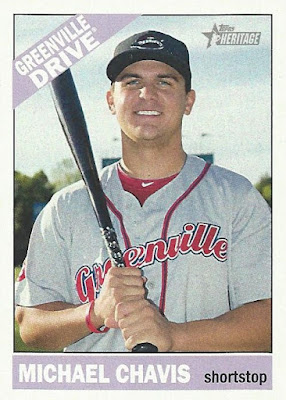 Michael Chavis has made it as high as AA Portland within the Red Sox farm system, but didn't fare all that well and finds himself back in A-ball in 2017. 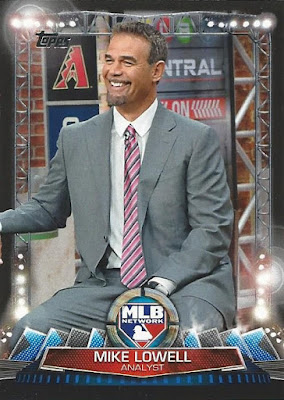 Here's my first MLB Network insert from 2017 Topps.  Kind of a weird insert set, but I do DVR the network's show Quick Pitch every single morning during the season.  They do a great job with the show and it's a convenient way to keep up with news and highlights.  Obviously Brian chose to include this one due to Lowell's success in Boston as a player. 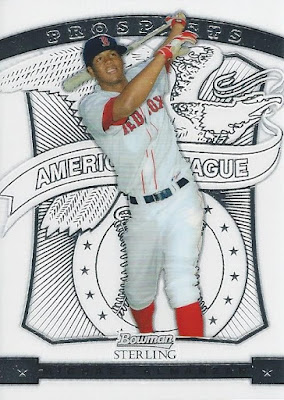 I was collecting in 2009, however I barely even knew that this Bowman Sterling set existed.  I'm guessing this was a hobby-only release. 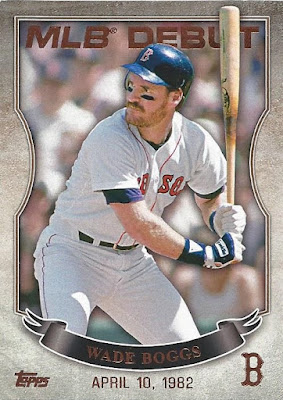 At first I was confident that this Wade Boggs insert from 2016 flagship was a dupe, but then I realized the one I already had was a Silver Foil version, and this one is Bronze Foil.  Boggs count increases by one after all! 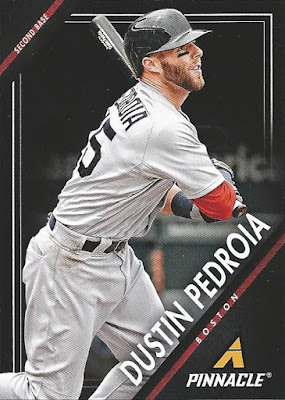 Here's a Pedroia from 2013 Pinnacle.  I love the dark look of these cards, very true to the original Pinnacle baseball and hockey releases I'm familiar with from the early '90s.  If this set were licensed I'd probably seriously consider going for it. 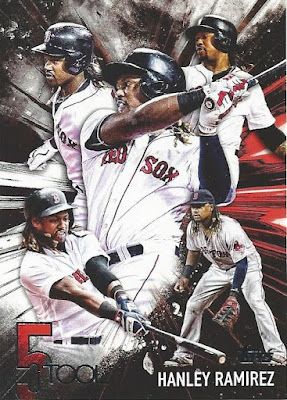 Final Red Sox card for today, a 5 Tool insert of HanRam from 2017 Topps flagship.  These are awfully busy, but I think they kind of work.  Last I checked though only two of the five tools involved swinging a bat, and there are three photos of Ramirez swinging here.  I'm nit-picking though. 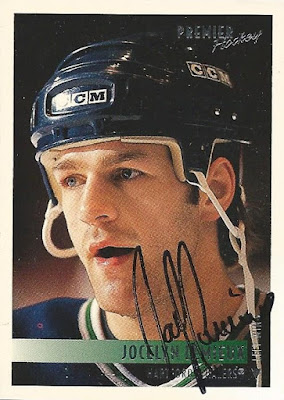 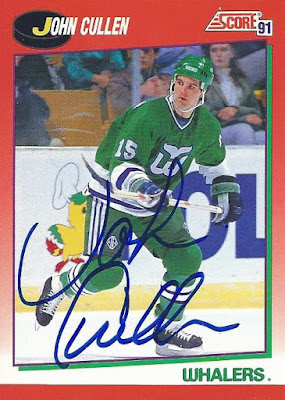 ...and a Score Canadian John Cullen!  What a thoughtful inclusion, as I lacked autographs of both of these guys prior to receiving this package.  I especially like the Cullen given that he's wearing the glorious all-green get-up of the '80s/early '90s.

Hockey season is just around the corner, perfect timing for these autos!  In fact, I need to make a concerted effort to get some more hockey cards posted here.  It's been all baseball lately, as tends to happen over the summer, but I've recently picked up some really amazing hockey cards too that have yet to see the light of day here.

Brian, thanks so much for remembering me and my little corner of the card-collecting universe after all this time!  I managed to get a return PWE to you in yesterday's mail as well, look for it this coming week.

Despite getting five trade packages from this summer scanned and posted here in the past couple of weeks, I've still got a few to go.  Next up is a first time trader who reads the blog and took the time to reach out to me and send me cards just because.  Card collectors sure are a generous group of people.
Posted by shoeboxlegends at 9:45 AM

I love that UD HOFers set.