My Inability to Focus

If you check in here frequently (and my thanks if you do!), you might be under the impression that all I collect is buybacks.  For better than a year now I've been somewhat obsessed with them as I work to complete a 792-card franken-set.

In truth though, my collecting interests are all over the map.  I think my most recent shipment from COMC, which arrived just a few days ago, does a good job illustrating that.  Of the hundred cards I had shipped in that group, about half were buybacks.  From the other half, I pulled ten random cards to post here today... 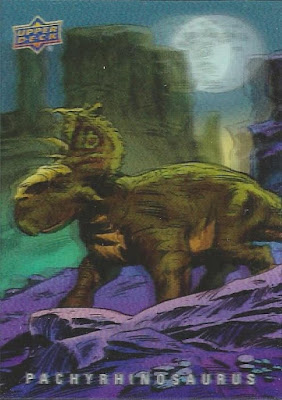 In 2015, Upper Deck released a set of dinosaur cards.  These appeal to my inner child, as I've always been fascinated by these creatures.  This fascination was further enhanced when Jurassic Park was released in theaters when I was just ten years old.

Anyway, I wasn't too impressed with the Upper Deck Dinosaurs set on the whole, but the one thing that really appealed to me were the 3-D inserts.  These are printed using lenticular technology (think Kellogg's baseball cards of the '70s and '80s).  There are 42 in total, but I'll never complete the set as some are extremely short-printed.  Nonetheless, when I come across one for less than a buck like I did here it's hard to resist. 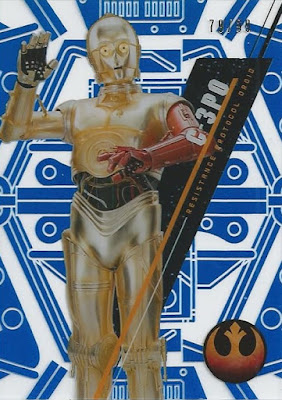 There have been some great sets released recently for Star Wars fans, and I rate the Topps Tek sets high among them.  This "Blue Rainbow" C-3PO from last year's release is numbered to /99.  This is the third of these parallels I've been able to secure now, joining Jabba the Hutt, and Luke Skywalker.  There are 112 of these in the set, who knows maybe I'll be crazy enough to pursue it one day. 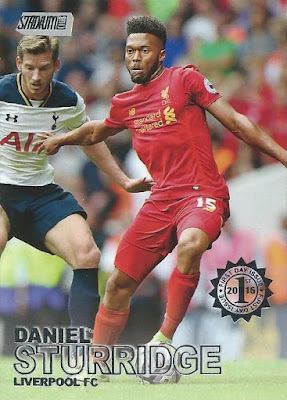 Here's a neat one from last season's Stadium Club Premier release.  Timing is perfect here, as the 2017-18 BPL season kicked off just this weekend.  In fact, earlier this morning I had the pleasure of watching my favorite club, Liverpool, come back twice in their game against Watford, only to give up the lead in the waning minutes and have to settle for a tie and a single point.

You get one of these 1st Day Issue parallels per box, and since I kinda whiffed in my hobby box, I was happy to right that wrong with this card for less than $2. 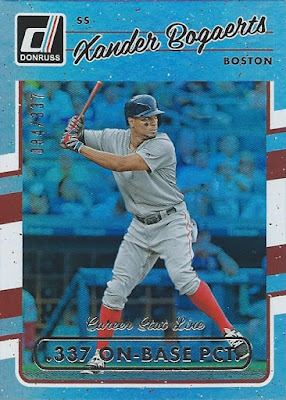 Xander Bogaerts is having an off year so far in 2017, batting well below .300 which is unusual for him.  He's still my favorite current Red Sox player though, so I seek out cheap additions from time to time.  This "Career Stat Line" parallel from 2017 Donruss set me back all of a buck and a quarter.  It's numbered to /337 in the upper left, though it's a bit difficult to make out in this scan. 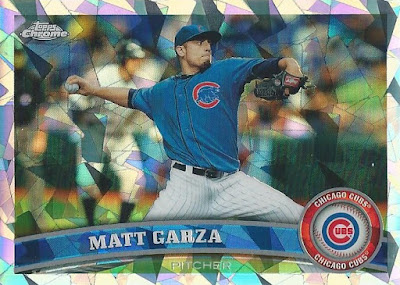 Here's one towards my 2011 Topps Chrome Atomic set build.  I still maintain that the Topps Chrome Atomic Refractors are some of the most beautiful cards released since I got back into the hobby around 2007.  I'm more than halfway to the 220-card set now, nice to cross another one off the list for cheap coin. 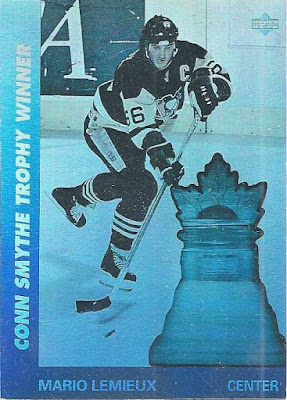 Nothing screams early '90s quite like holograms.  In the '91-92 Upper Deck set, there was a 9-card insert set of Award Winner Holograms.  Probably had all nine as a kid, but none have survived the passage of time.  I grabbed this Mario Lemieux for nostalgia's sake, and because it was less than 50 cents. 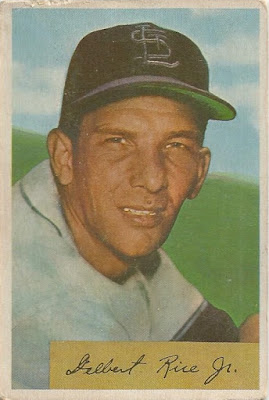 After three straight shiny cards, let's cleanse the pallet with some vintage.  I've built a small little collection of 1954 Bowman cards over time, almost exclusively care of COMC.  I can't resist these oversized beauties when the price is right, and that was certainly the case for this Del Rice at a dollar even. 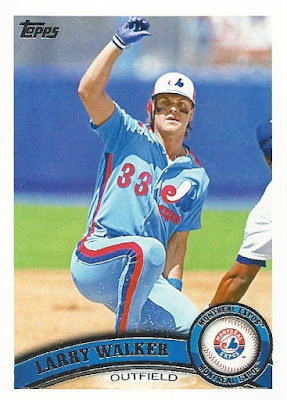 I'm still under the delusion that one day I'll accumulate all of the Legends Variations from the 2011 Topps set.  Unlikely, but I'm a tad bit closer now after adding Larry Walker here in his powder blue Expos uniform! 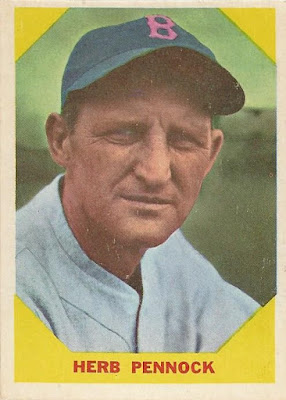 Herb Pennock's 1922 American Caramel card is high up there on the list of pre-war Red Sox cards that I'm on the lookout for.  It's not the easiest card to find, nor the cheapest, so in the meantime this 1960 Fleer Greats of the Game was a nice fill-in for a buck.  I got this one during an aggressive sale by the seller, and was surprised to find it at just a dollar given the great shape it's in. 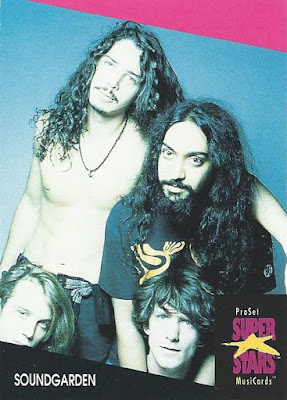 Last card for the day, and we end on a bit of a somber note.  I'm into all kinds of music as an adult, from folk to jazz to electronic to rap.  I grew up as a child of rock and roll though.  Some of the earliest albums I remember owning were of The Beatles, my favorite band ever, Pearl Jam, and of course Soundgarden.

I got a copy of Superunknown on CD for my birthday when I was in 7th grade, and I must have played it through 100 times.  Hell, I still have it on my iPhone today, and still view it as one of the most solid overall rock albums of the '90s.  While I don't really post about these types of things, Chris Cornell's passing earlier this year really made me realize how old I'm getting and how long it's been since I first heard his band play.

I figured this Pro Set SuperStars MusiCards card was a fitting tribute to the man, and the band, for my collection.

Well that's a wrap for today.  As you can see, COMC really feeds into my inability to focus!
Posted by shoeboxlegends at 12:22 PM

I like those lenticular dinos too, but I'm not even trying to build the set. Luckily, I have two laying around here (Edmontosaurus & Elasmosaurus), so I hope you need them cuz I'll add them to a small stack I have growing for you.

"Focus" is highly overrated...cool cards! I just shipped a COMC order this week that I've been building since November...259 items, mostly cards but a couple of comic books as well. It's the largest order I've ever made with them and a LOT of it is just random cards I liked/were cheap and serially numbered. But I did do a couple of projects with them and when the box arrives, it will probably get me through the entire month of September's postings!

Nice COMC haul. I collect a little bit of everything too and enjoy posts that showcase some of the non-sports stuff like dinosaurs, Star Wars, and music. Great stuff!

I love dinosaurs as well, especially when I was 9 and similar to you, when Jurassic Park came out my love for dinos grew. My 2 year old is just getting into it, I bought him a toy T-Rex recently and he loves to pretend to chase after me with it and make a roar sound. Love the Upper Deck Dino cards, would like to see what the base set looks like.

Nice Herb Pennock! The Larry Walker is a cool card, too. And I grabbed that Soundgarden card off COMC for the same reason. I think I'd buy more music cards if there were better choices than junk-wax era Pro Set products, but you take what you can get.