I'm so backlogged with trade packages that tonight, when I had a few minutes free for a change, I decided to just randomly grab one from the stack I have waiting to be processed on the desk in my office.  The winner was a PWE that I received from Joe Shlabotnik just this past week.  I still have two other packages from Joe that came in before this one that haven't been posted, but you have to start somewhere right? 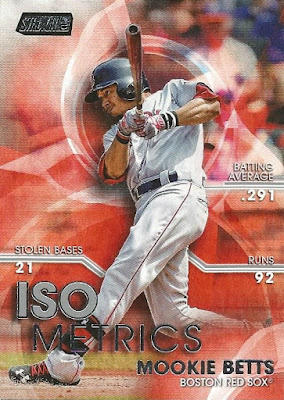 In the lead-off spot is a nice Mookie Betts insert from last year's Stadium Club release.  Collectors seem to have cooled just a bit on Betts in 2017 after his absolute monster 2016 season.  While he's not going to reach the very high bar that he set last year, Mookie is still having a solid season.  He leads the club with 130 hits at the time of this post, has already collected 35 doubles, and has a real shot at a 100-RBI campaign.

I don't typically care much for Stadium Club inserts, but as those go this one's not half bad. 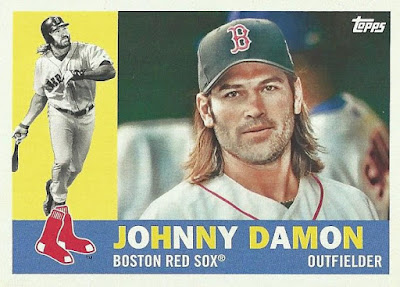 Newer Red Sox cards (from the past two seasons) seemed to be the theme of this PWE.  I don't mind in the least, in fact it's pretty damn convenient as I just haven't had the time to pick up much new cardboard of late.  This Johnny Damon is just my second Red Sox card from the latest incarnation of Archives, with both coming in trade. 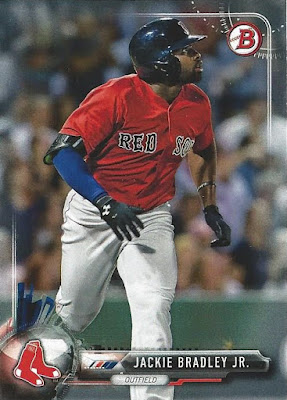 Jackie Bradley Jr. here represents my very first look at 2017 Bowman in hand.  Not a bad card, but not a classic either.  A muted, somewhat forgettable design, which is just about par for the course for Bowman. 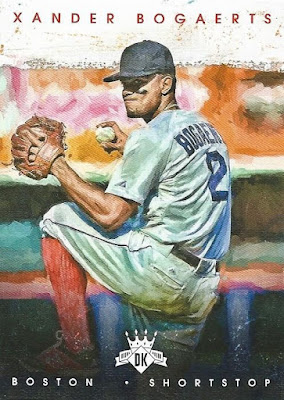 Could have sworn that I already had a copy of this Bogaerts Diamond Kings from last year, but my records seem to disagree.  I'm still in the painful and slow process of recording my collection on The Trading Card Database after the collapse of Zistle, and so far this is the 39th Xander Bogaerts card I've entered.  That's good enough for #1 overall in my baseball card collection at this stage. 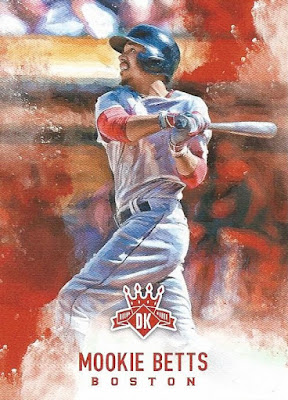 Another new Mookie, and my first look at 2017 Panini Diamond Kings.  I must say I like these just as much as the 2016 release.  This set, along with the 2017 Donruss release, really makes me wish that Panini had a license. 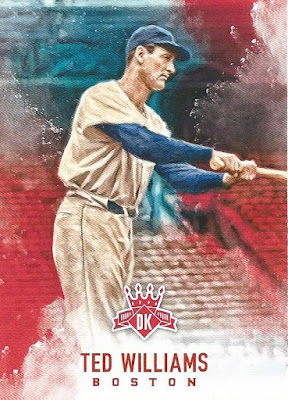 This is a nice Ted Williams card, but with logos it really could have been something special. 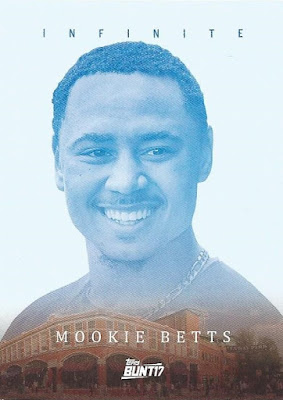 My small Mookie Betts collection really got a nice uptick with this particular delivery.  I'm not sure just how I feel about these "Infinite" inserts from 2017 Topps Bunt.  Part of me thinks they look unlicensed and a tad boring, but another part of me is appreciating their "90s Studio" feel. 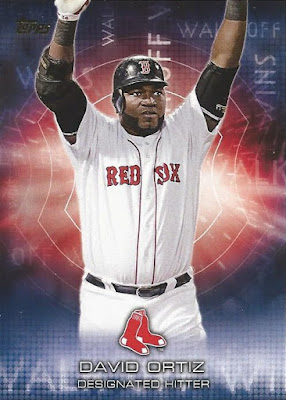 Here's the second card of the package that I could have sworn I already owned a copy of, but again it appears my instincts were incorrect.  David Ortiz cards seem to grow on trees, I hope Topps gives it a rest for a few years after his retirement here before they start flooding products with his retired cards. 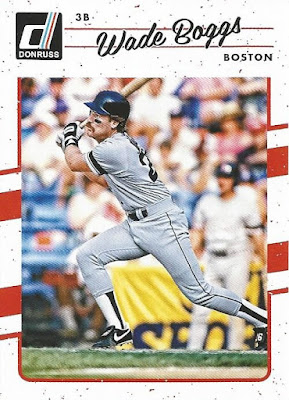 Here's one from the Donruss set I mentioned a moment ago.  In one of my few moments of retail weakness this year I opened a couple of rack packs of this stuff and I actually really enjoyed it.  There's a variation of this card (because of course there is) where instead of Wade Boggs for the player name it simply says "Chicken Man". 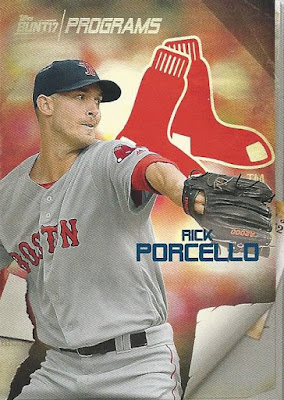 Here's another one from 2017 Bunt, a Programs insert.  Love the concept here, though if I'm being honest I think it was executed better in last year's release.  Still a cool card of the 2016 AL Cy Young winner. 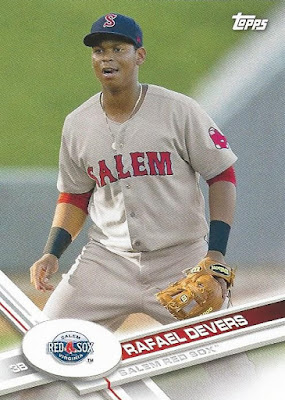 My favorite card of the entire package might be this Rafael Devers.  This guy has been tearing it up since being called up to Boston a couple of weeks back, and I can only assume I'd have to pay a heavy local tax for a copy of this card here in New England.

Joe's note accompanying the cards stated that some were cards he pulled from packs while others came from dime boxes.  I'd assume this one was the former, because if it was the latter that was one hell of a dime box find! 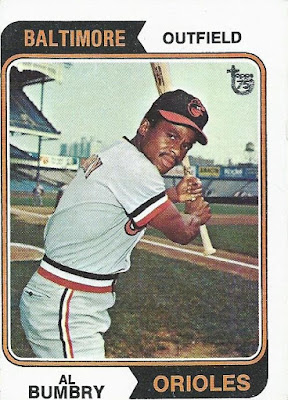 Last but not least, a buyback, and fittingly, an Oriole.  A cool buyback to get too, as Bumbry was coming off his 1973 AL Rookie of the Year campaign when this one was being pulled from packs.  He'd later win a World Series with the O's in 1983, and is enshrined in the team's HOF.  A nice old Yankee Stadium backdrop here also. 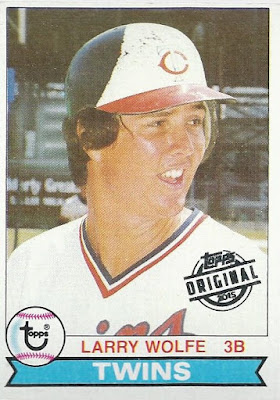 Larry Wolfe's '79 release has been resident in slot 137 of the binder for some time now, but it can't really hold a candle to the Bumbry card. 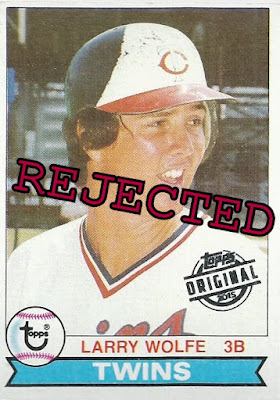 Easy call there, and the franken-set is adjusted ever so slightly as Al Bumbry muscles his way into the binder.

Thanks for the fantastic cards Joe!  The smattering of recent Red Sox was much appreciated, and any trade package featuring cards that force their way into the franken-set binder is an automatic winner in my book.  Although I'm sure it probably feels like it, I promise I haven't forgotten about posting your last two packages, and more importantly about returning fire.  Soon!

Glad you enjoyed the cards! I'll admit, that Devers didn't come out of a dime box... it came out of a Quarter box that I almost passed by until I noticed the Pro Debut cards. I got a few for myself, and figured there was a pretty decent chance that you didn't have the Devers yet so I sent it your way. Glad I apparently saved you a buck or two (or three or four...)

Betts looks like a god in that Bunt card.

I agree Hackenbush or perhaps just dead and is haunting everyone.