Monsters of 2012 - The Splendid Splinter!

I've really focused pretty heavily on both my Red Sox and Whalers team collections this past year.  It makes sense I guess, as these two teams were what got me into sports as a kid, and were the catalyst behind me becoming the fan that I am today.  Team collecting has now jumped to near the top of my short list of what I collect, which as the year closes probably looks something like this:
Yeah I guess that sums it up, with the caveat that I will go completely random and purchase just about any piece of cardboard for the right price if it looks nice to me.  Anyway, my point in all this is that I recently combined the funds from the card draft I just held with the profits from a really good night at my weekly poker game and picked up an absolute whopper for my Red Sox collection: 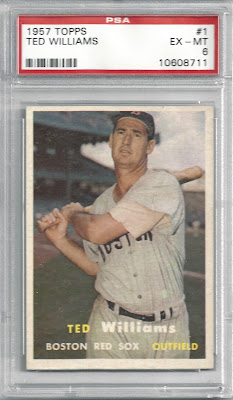 Anyone who collects vintage Red Sox cards knows there is one huge roadblock to completing many of the '50s team sets, and his name is Ted Williams.  It's something many team collectors deal with, Aaron for the Braves, Clemente for the Pirates, etc.  I guess I should just be grateful that I'm not a Dodgers collector who has to deal with Jackie Robinson and guys like Snider, Reese, Campanella, etc.  For me, it's a great feeling to acquire my first proper Ted Williams card and clear that roadblock for one my favorite sets from the decade, 1957 Topps.

There are just so many things I love about the card.  The classic pose.  The set itself.  The fact that it's a "bookend" card at #1 on the checklist.  1957 Topps often has centering issues.  I have passed on so many cards over time because they're just wildly off-center from left to right, which is extremely noticeable given the plain white borders of the cards.  This one is slightly off top to bottom, but is better left to right than many I've seen.  Combine that with solid corners and this card just had great visual appeal, enough for me to make a jump at it. 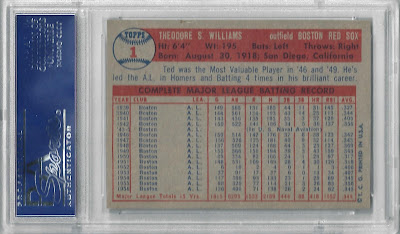 Even the back of the card is awesome.  It's not everyday you see career stats going back to the '30s.  I like that the three years Williams missed while serving his country are also noted.

I would have to say this is my single favorite pick-up of 2012.  It's far from the worst I'll have to deal with if I ever hope to complete the '50s Red Sox run, but it's a great start.  Maybe in 2013 I'll be lucky enough to pick up another Williams...
Posted by shoeboxlegends at 9:00 PM

That's just fantastic. I love the stat lines all the way back to 1939.