Monsters of 2012 - A Trio of Hall-of-Fame Sluggers

Now that 2012 is winding down it's time for my annual review on how my collection grew/evolved this past year.  In some sense I took the same approach as I have the last three or four years, for example I continued my trend of not spending much money on modern wax.  I've purchased none at at since I ripped one lonely blaster of 2012-13 O-Pee-Chee hockey back in September.  There was one Allen & Ginter blaster in July before that, and three blasters of Topps Archives baseball all the way back in April.  No loose packs whatsoever save one or two repack packs of junk wax.  You get the point.

I do enjoy ripping wax, but I just don't see enough value in it in terms of improving my collection.  I do much better when I target specific cards that I want.  It's amazing how much random loose pack-ripping can drain your wallet, but for some opening packs is the highlight of collecting, so to each his own!  Anyway, in the past I've mostly used the money I didn't spend on packs to chase cards in the $25 and under range, save a few very big purchases.  This year though I decided to make fewer overall purchases, and instead be more patient and try to land some of the big fish that I've been after for quite some time.  I fared pretty well, and I've already shown off some of the benefits of this new approach a couple of times (Patrick Roy RC, Howie Morenz Sport Kings).  There were three that I never got the chance to post, so I'm going to get them up over the next few days by the end of the year.  Here's the first: 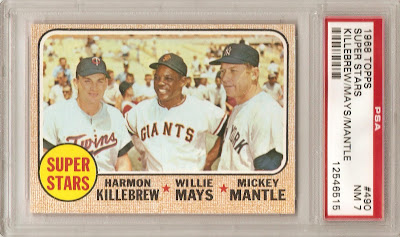 I have stated many times in the past that I am a huge fan of the Topps combo cards from the '50s and '60s flagship baseball sets.  They just seemed to mean something more when Topps wasn't slapping us in the face with dozens and dozens of them in Updates & Highlights each year.  They were also a great chance to get multiple Hall-of-Famers onto a single piece of cardboard.  This might be the best lineup to ever grace a vintage Topps combo card. 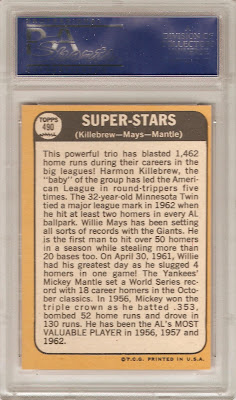 Coming up next will be a player the average sports fan probably hasn't even heard of...
Posted by shoeboxlegends at 5:14 PM

I still have a lot of 1968 cards from when I was a kid but I don't have that one (probably a series I missed). Awesome!

Thanks Hackenbush! 1968 Topps is just one of those sets I don't have much of for whatever reason. Then again, I guess you could say that about most '60s sets...