Not a lot of time today, so all I can muster is a quick post with two recent additions to my Adrian Gonzalez Red Sox collection.  First we have the card featured in yesterday's post, from the 2012 Topps Red Sox team set: 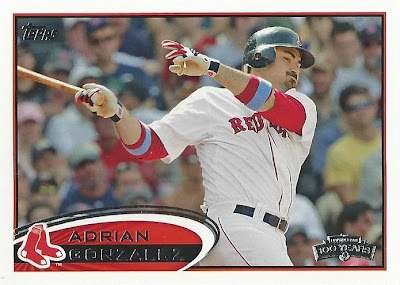 Between Topps flagship, Topps Opening Day, Topps Chrome, the Topps Red Sox team set, and the numerous parallels available in each of those sets, there are a ton of variations of this same exact photo/card in existence. I currently have 11 2012 Topps cards featuring this same photo, plus two printing plates and that's not even half of what's out there.  Enough already! 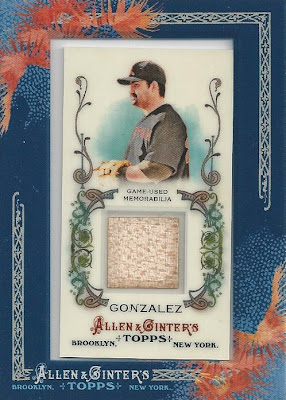 Then we have the main reason behind this post, my first Adrian Gonzalez relic card, from the 2011 Allen & Ginter set.  I was never a huge relic guy, and feel even less attracted to them after all the noise this past year regarding authenticity.  I'm much more of an on-card auto guy when it comes to hits.  That being said, I will make exceptions for my Adrian Gonzalez collection whenever I find a relic on the cheap.  This is obviously a bat relic, which I believe was the only relic variation available for Gonzalez in the 2011 A & G set (he does have a jersey swatch relic in the 2012 set). 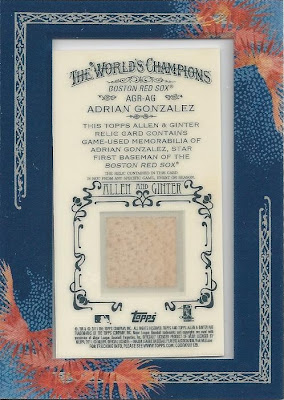 The card draft that I just held kept me pretty well occupied for the month of December, but I've still picked up some great new cards recently and I should now be back into the swing of things as packages go out this week.  I've got at least a few more really nice Gonzalez cards coming in the near future, and I've also got three huge cards acquired in 2012 that I haven't posted about yet coming soon!

Relic or not, it's still an amazing card in my view!