Today's Signature Sundays post features one of my favorite autograph pick-ups from this past year: 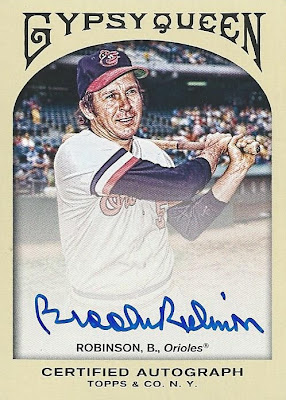 I went hard after the 2011 Gypsy Queen set, busting quite a bit of wax (at least by my definition) when it first came out.  I never knew until I stumbled upon it recently in Beckett though that Brooks Robinson had an autograph in the set.  As soon as I learned this I hopped online to see what they looked like, and as luck would have it there was an auction for one on eBay ending in just a few hours.  I set my bid and was prepared to pay up to full book value ($25), but as luck would have it I landed this copy for $18.

I really love the way this card looks, and the fact that the auto is on-card gave Brooks plenty of space for a nice long signature.  I've let go of my slightly faded Robinson Sweet Spot auto in my card draft, so I was happy to land an upgrade so quickly.  For this price I'll take a card like this over a blaster of unknowns any day.  It's amazing to me just how many solid autos (of Hall-of-Famers even!) can be had for $20 or less shipped, man I love eBay! 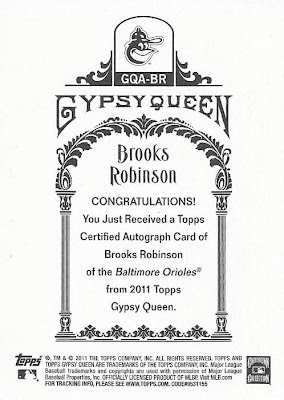 With the 2012-13 NHL season almost certainly cancelled, I just can't seem to spend even a dime on modern hockey cards.  I have to say it's working out fairly well, as I've got some more great on-card autos on the way (including at least one more Hall-of-Famer) thanks to the change in how I approach my card budget.  Until next Sunday...
Posted by shoeboxlegends at 6:49 PM

That's a nice one. So often Brooksie signs with the Brooks over the Robinson. So weird that you can get on card autos of the two best 3rd basemen of their generation, Robinson and Santo for lots less combined than one of some 2nd or third year guy playing now.

Wow very nice piece! Im still scrambling to try and gun down 2011 queen as i was not wholly apart of the scene when they first came out. Great stuff!

And I agree with Hackenbush; most times you can get autos of HOFers for much less than some current player who, odds are, not be in the HOF.