Here's the second big card of 2012 that I never got a chance to post about.  Like I said yesterday, this is one athlete that the average modern-day sports fan may not be familiar with: 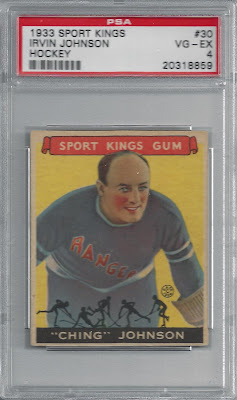 Howie Morenz was not the only original Sport Kings card I was able to snag this past year, I also picked up Ching Johnson here.  I'll admit that this one doesn't quite have the wow factor that the Morenz card does, but any card from this set is just beyond cool in my book.  Ching was an original member of the New York Rangers, he won two Stanley Cups (the first two for the Rangers franchise), was elected an All-Star multiple times, and along with Eddie Shore was regarded as one of the hardest body-checking defensemen of his day.  He's in the Hall of Fame, and even more impressive than that he battled in France during World War I.  His nickname may be pretty racist (basically came about because he "looked Asian"), but Johnson embodied everything that was great about old-time hockey. 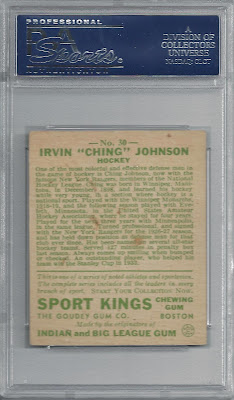 One item of note, I've always seen Johnson's name listed as Ivan, and that's all I've seen while browsing the web to learn about his career today as well.  I have no idea where Goudey would have gotten the Irvin from.  Does anyone know?

Although the checklist is small I have no delusions that I'll ever collect this entire set.  The Babe Ruth and Ty Cobb cards alone put it well out of my reach, but I would love to get the remaining two hockey cards from the set at one point.  The Eddie Shore is particularly high on my list, in fact I can't think of a single hockey card I'd love to track down more than that one.  For now I'll just dream about it and enjoy my Ching Johnson...
Posted by shoeboxlegends at 8:05 PM

I love the Sport Kings. I think they are far superior to the Goudey baseball cards issued at the same time, even though it is the same company and concept. Just far better player and image selection.