It's been hard for me to get excited about much in the world of hockey cards lately.  Like many collectors the NHL lockout has me so soured on the sport that I just can't justify forking over my hard-earned money for anything related to that mess of a league right now.  There has been one product that has caught my eye this winter though, the recently released 2012-13 Panini Classics Signatures set.  I think the design is great, and the checklist has a lot of players from the hockey collecting heyday of my youth that don't get represented in a ton of other sets.  Best of all, on-card autos abound, in fact autographed cards fall at one per pack.

While I will not be shelling out $150+ for a 6-pack box, I will gladly (and frugally!) snipe certain singles on the secondary market.  My first such purchase cost me a whopping $8.99 with free shipping, and arrived in my mailbox late this past week: 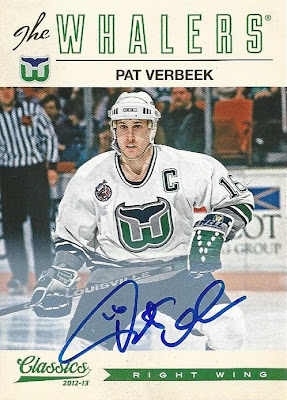 Yes, I confess that one of the reasons I am excited about this set is the fact that there are Whalers cards on the checklist.  This is an autographed version of Verbeek's base card.  As far as I can tell, there are supposedly on-card autograph versions of all 200 base cards, although some are apparently super short-printed.

I think the simple, understated design of the card front works well, and as a Whalers collector I like that the team is a central focus of the card, featured in large font at the top along with logo.  There's still plenty of room for a photo (and Panini selected a great one for Verbeek's card if you ask me), and as far as autos go you just can't beat on-card.  These cards have a really retro feel, speaking of which, I think I may like the backs even more than the fronts: 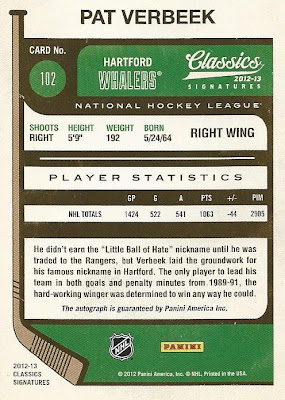 Alright, so maybe it's not perfect.  You could certainly point out a few flaws, like lack of any statistics other than career totals.  Let's face it though, this is 2012, if I want to know what Pat's career stats are I'm heading to my laptop or phone before my Whalers binder.  This card back reminds me of the card backs of my youth from the '80s and early '90s, and I absolutely love it.  Bonus points for referring to Verbeek as the "Little Ball of Hate" in the write-up.  This is one of the nicest card backs I've seen on a modern card in quite some time.

In all fairness I own just a single card so far, but at the outset I absolutely love this set and will certainly be tracking down more cards.  This is my second Pat Verbeek auto, and Panini is responsible for both of them so kudos for that.  I've definitely been critical of Panini as a company before, but I want to say job well done with this one!
Posted by shoeboxlegends at 8:52 PM

I actually have an old shoebox at my parents house that is probably full of guys like Pat Verbeek... The problem is, I haven't been able to find that box since returning to the hobby.

I can relate, I've recovered very little of my original childhood collection from my parents' garage. There's so much I never found and am not sure I ever will, including my first ever vintage baseball card, a 1950 Bowman Maurice McDermott I got at an antique store. Maybe someday...

Merry Christmas Eve Eve to you too Michael!

I know someone who has a Sean Burke from this set.

Like the Verbeek...don't love it...I actually LOVE my recent Verbeek pick up....but then again I am sure you can guess what Uni he is in there....