For reasons I won't get very deep into here at the moment, I've decided that it's time to curb back my spending on cardboard big time, at least temporarily.

During my first decade plus back in the hobby as an adult, I held myself to a very strict monthly budget that was, for most of those first ten years, well under $100 a month.  There was an occasional treat to myself if I got a work bonus or something, but for the most part I stuck to this pretty religiously.  In fact, I still have fairly meticulous records of what I spent my hobby budget on going all the way back to my return to collecting as an adult in 2007.

After experiencing the unexpected and shocking loss of an extremely close loved one towards the end of 2018 though, I noticed a definite change in my mindset related to my collecting.  I was reminded that life is short, and decided that with the job I'd done paying down all of my debt, buying a home, and saving throughout my 20s and early 30s I could loosen up a little and treat myself to some cards that I might never have an opportunity to land "someday in the future".  Life is precious, and I decided that as long as I did so responsibly, that "someday in the future" might as well be now.  No time like the present, that kind of stuff.

In the wake of that experience, a new scheme was born as far as my budgeting.  For the past 18+ months I've allowed myself to effectively spend whatever I want on cardboard, as long as A) all of my bills and life obligations were dealt with first and I remained debt free other than my mortgage, B) I'm saving a good deal of money in my 401k towards eventual retirement, and most importantly C) I saved or invested a dollar outside of and in addition to my 401k for every dollar I spent in the hobby.

For better than a year and a half now this approach has treated me really well, allowing me to focus on landing some bigger fish that I hope to cherish as cornerstones of my collection for decades to come if life cooperates.  As I said though, there is more than enough concern on the horizon related to my career, the economy as a whole, and this damn pandemic, that I don't feel comfortable with this approach any longer.

The solution?  The dawn of a third phase in my financial approach to collecting, in the form of a challenge to myself.  I'm going to try, a month at a time to start here since this will be very difficult for me, to stop spending any money on cards.  This sounds extreme, but I'm actually excited about it because the other side of the challenge is that I want to increase the appreciation for the cards I've already acquired, and in turn churn out more blog content.  So, not only am I challenging myself not to spend any money on cards in July, but I'm also going to attempt to post to this blog every single day for the entirety of the month!

This is going to be a hard habit to curb, but I'm confident that I can get there for three reasons.  First, I'm highly motivated to do so because living through these past few months has really changed my perspective again about what's important in life.  Secondly, I've built up a really large backlog of amazing cards over the years that are still waiting for their moment in the sun here on the blog.  Finally, I will grant myself two exceptions that will allow my hobby to continue to feel "fresh".  I have an eBay Bucks certificate from Q2 for a little over $70 to spend, and I also will allow myself to use any profits I can make from selling cards to land new ones.  While I won't be spending any additional money on cards, I will allow myself to use money generated by my existing collection to pick some up if that opportunity presents itself.

Thanks for reading along with me, I know this was a somewhat personal post that is probably not all that interesting to most, so I appreciate it.  Because I think every post on a sports card blog should ideally include a sports card, here's just one example of the type of awesome cards that I have backlogged and will be showing off during my new acquisition hiatus! 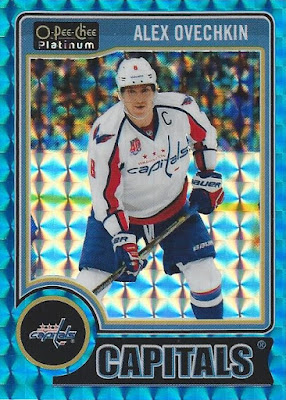 Ain't she a beauty?  I've shown off a few of these somewhat rare Blue Cubes parallels now, from the inaugural O-Pee-Chee Platinum set released back in 2014.  They were hard to come by at the time of release, and at just 65 copies each are even harder to track down now a few years later.  I'm really pleased to have Ovie's card from the set in hand.

Like him or not, Alex could hang up the skates today and already have cemented himself as one of the top scorers in NHL history.  I certainly don't player collect the guy, in fact with one or two exceptions I don't really player collect anybody these days.  Nonetheless, this will make a nice little trifecta of Ovechkin cards when I group it with my Young Guns RC and the sweet acetate Ovechkin I shared last month. 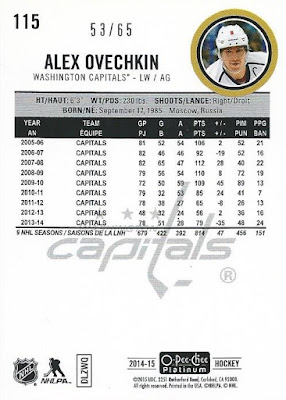 Here's the back, with the serial-numbering up top.  Amazing that Alex had already surpassed the 400-goal plateau even years back!

That's all for today.  Thanks for reading my ramblings about the hobby, and I hope you'll check in throughout the month of July as I start posting through some of the awesome stuff that deserves some long-overdue blog love!

Have you adjusted your hobby spending or otherwise cut back in the face of the current economic uncertainty?  Everyone's situation is obviously different, but if you're comfortable sharing I'd love to hear your thoughts in the comments.

Thanks as always for stopping by!
Posted by shoeboxlegends at 5:00 PM

I think it would be easier for me to take a break from buying than trading.

I'm fortunate that the effect of the pandemic on my finances has been small, so far, and, well, I was always focuses on lower-end collecting anyway. The thing that has had an impact on my buying is that there are no card shows to go to (and even if they start up again in my area, it's going to be a while before I'm comfortable attending).

I've been buying perhaps a bit more from eBay than normal, and I just placed my first baseballcardstore.ca order (but I'll do a couple more before I have it shipped). I haven't bought any boxes, not even a blaster, during this time. So probably I'm spending less than usual, but I'm open to spending more when the right deals come along.

I've drastically cut back and will be doing so even further. Like you, I realize that there is important stuff I can't do if I keep spending all my money as soon as I get it. I'm saving money for a classic car. I don't think it will be this year...although the prices have been plummeting lately...but if I keep waiting for someday, it'll be too late.

I actually finished June with not having spent all my money, which is rare.

I have a huge stash of cards I've gotten (including many from you) that I have not processed...meaning looked at...that I can pull from when I get the urge for new cards.

Good to hear that you've always paid attention to your collecting expenditures. Having my hobby be self-sustaining is a state I'd like to reach someday, though I lack the patience (both to sell effectively and to not pull the trigger on purchases until I have funds available)!
Have fun!

Best of luck on your personal challenge. I'm not sure which one I'd have less trouble with. I'm guessing writing a post a day. I have trouble sometimes posting every other day.

Anyways... I've cut back a lot in 2020, but it started before the COVID thing. Once I had to start paying tax on adding money to my COMC account and on 95% of my eBay purchases, it lowered the amount I was willing to spend on certain cards... which has ultimately impacted the number of auctions won or best offers accepted.

And now that I know I'm losing several thousand dollars in savings due to not teaching summer school, I'm cutting back even more. The good news is I just placed an order of five $100 eBay gift cards with my credit card reward points... so I have some spending money if anything I really, really want pops up for a good price.

Good luck with your goal. That is a beautiful Ovie card. The blue works great for the Caps. OK I'm biased since they are my homie team.

That's an awesome Ovechkin card, and you have compiled an incredible collection in the years I've been following your blog. A one-month hiatus is well-earned and probably the smart thing to do under the circumstances. (It's also about the longest I can go without spending any cash on cards lol)

I should be writing about this on my blog in the near future - *should be* :-D - but my spending has been drastically reduced without my fully intending to do so. I didn't expect to spend much on new cards in 2020 because I don't care for most of the releases, but I've been spending time organizing my collection and I've found that quality time with what I've already got takes away some of the desire to run out and buy more cards.

I've been spending less myself...mostly because you can't get anything at retail anymore unless you follow the vendor into WalMart or Target. Hobby boxes are too expensive and I really don't need anymore Freddie Freeman relics (that seems to be what I always get).